26 places in Merseyside everyone needs to visit at least once 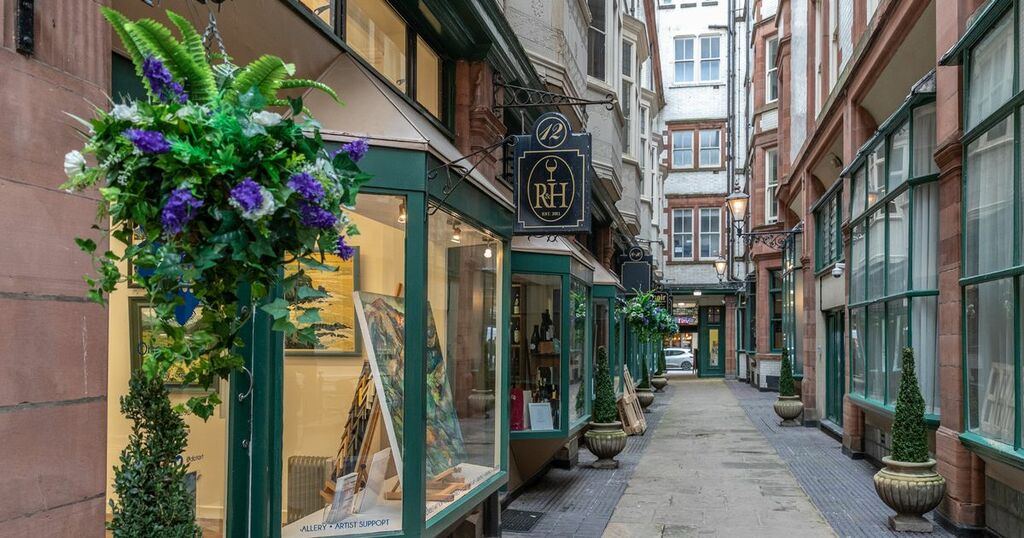 You probably think you've seen and done everything there is to do in Merseyside.

But the region still has some secrets up its sleeves, including hidden shopping streets, little-known cafes and stunning green spaces you might never have heard of.

Some of the best places to explore in Merseyside are hiding in plain sight while others you need to do a bit of searching to find.

With a new year before us, why not seek out some new places and check them out for yourself?

READ MORE: Liverpool named one of the best cities to explore at night

There is so much of Merseyside still to discover, but we've taken a look at all the places you just need to visit in 2022.

If you do anything this year, check these places off your bucketlist.

It's easy to overlook Queen Avenue as the quiet little side street is based off the bustling Castle Street.

In between Rudy's pizzeria and Tune Hotel, the avenue is lined with Grade II-listed buildings that now house shops.

Previously, Queen Avenue was home to insurance companies and financial businesses back when the area got its name as the "business district".

But now it features hidden gems such as Dot Art, R and H Fine Wines and Abditory.

Tucked away inside an industrial warehouse on Cotton Street, Ten Streets Market is the perfect retreat from high street shopping.

In the market, you can find plants, jewellery, hand made masks, vintage clothing and a mix of retro and up-cycled, one of a kind pieces of furniture.

Just a stone's throw from Liverpool ONE, Thoughtfully is tucked away from the hustle and bustle of the city centre.

Serving up a range of breakfast and lunch dishes, including cheese toasties, pancakes, granola and more, Thoughtfully is known for its tranquil atmosphere.

Since it opened its doors more than 30 years ago, owner Trevor Doswell and his team have been selling unique pieces from all over the world at 69A.

The vintage antique shop has been in many different buildings since it opened in 1976 but has always remained on Renshaw Street.

The Liverpool Beatles Museum (formerly Magical Beatles Museum) is owned and run by Roag Best, brother of the ‘fifth Beatle’ Pete, and utilises his own personal collection of Beatles memorabilia.

Across three floors, the museum features more than 300 rare and authentic items, following The Beatles on their journey from their early days at the Casbah Coffee Club to their final days together.

Liverpool’s oldest prison, the Bridewell, is now one of the city’s more popular pubs.

Bridewell Prison was constructed in 1857-1859 by surveyor John Weightman, and was originally designed as a police station and courts complex for the Corporation of Liverpool.

It housed inmates detained for court appearances and short sentences, and is now a Grade II-listed building.

The experience is the first time in the Liver Building's history that the top floors are open to the public for tours.

The tour begins in the new lower ground floor visitor’s centre where visitors can learn about the history of the building, before heading up to the Liver Building’s 10th floor balcony, exploring the city’s history in the riverside clock room’s audio-visual experience and, finally, enjoy the views from the 15th floor clock tower.

In the 1970s a man from Sichuan in China opened a tiny café on Lightbody Street, where he would cook up his native cuisine and homely British dishes for docker-workers and drivers in Liverpool.

Decades later, Mr San passed away, but his much loved café still lives on run by his wife.

The fish cakes and special curry are a highlight on the menu.

The gateway to the Dee Estuary reserve, Burton Mere Wetlands is the perfect outdoor retreat.

The freshwater wetland is filled with wildlife, including swallows, swifts, avocets, harriers and noisy redshanks.

It’s perfect for taking a long walk on a summer’s day - or winter, if you’re willing to brave the cold.

If you’re the type of person that likes to sit and watch the world go by, then Rococo is the place for you.

Above Lord Street and the hustle and bustle of the city centre, Rococo is hidden above the EE shop.

Inside customers will find cosy settings, comfortable couches and the biggest hot chocolates fully loaded with cream and mini marshmallows.

While Liverpool isn't short of beer gardens and terraces to choose from, they tend to fill up quickly as people try to make the most of the summer weather.

If you're after a lesser known beer garden where you're more likely to secure a seat, there's a hidden gem on Maryland Street that's definitely worth visiting.

Set between our two iconic cathedrals , Free State Kitchen is a contemporary restaurant serving up American-inspired classics and it has a surprisingly spacious garden at the back of the venue.

There's an array of benches available where guests can enjoy their food or a pint in the great outdoors while hanging lights are strung overhead to provide ambience on warm summer evenings.

Specialising in creative cocktails and bagels, East River is designed to be two types of places, firstly a coffee-and-linger daytime hangout and secondly a cocktail and drinks kind of place at night.

Vale Park is home to Fairy Village , an enchanting family garden that is perfect for taking your little ones exploring.

The driftwood forest is situated near a couple’s lodge at the far end of the park, and was created when they decided to repurpose some driftwood left over from the Black Pearl to create a fairy glen.

Since then, the glen has grown into a huge fairy village that attracts visitors from across Merseyside every day.

Italian restaurant Flavio's can be found on Tarbock Road in Huyton, but don't be surprised if you miss it the first time around.

The small restaurant is actually based inside a former petrol station and serves delicious pasta dishes - but it's only big enough to seat around 40 people so you'll want to book in advance to secure a spot.

This scenic spot is definitely worth discovering.

If you head into Hale, past the church, you'll find yourself at the start of a track down to the lighthouse and the rocky beach where you can enjoy the peace and quiet.

You’ll also be able to see the planes flying overhead as they prepare to land at John Lennon Airport.

Just off the coast of West Kirby is a little archipelago of islands, and it has become a favourite pastime of many to walk across to the islands during low tide.

For many, there’s nothing quite like spending the afternoon there.

If you’ve got a love for beer, this might be the perfect place for you.

Love Lane Brewery is based in the city centre and even has an online shop stocked with everything you could need, including its own-brand beers, gift vouchers, glassware and even The Ginsmiths of Liverpool gin.

Reynolds Park is a beautiful, quiet, park that can be found nestled in the suburbs.

The Woolton park is popular with dog walkers and those who like to relax and take in the beauty.

The 14-acre park also includes a walled garden and plenty of benches where you can sit and watch the day go by.

A waterfront view with a difference, this is a gorgeous place to sink a few on a sunny day. As the name suggests, the bar and restaurant overlooks the yachts and powerboats moored in Liverpool’s marina.

Inside it has a traditional yacht club feel, with big screens where you can watch live sports. But the huge decked area outside is where you really want to be - tucking into a huge plate of fish and chips with a cold crisp drink on a sunny summer day.

An award-winning vegan treat shop based on Berry Street, The Nakery sells some incredible treats whether you’re vegan or not.

For your friends and family with a sweet tooth, you can pick up everything from cake jars and billionaire shortbread bars to weekend treat boxes.

As well as taking in the sites on offer, there is plenty to do at the park, from visiting the café and ice cream parlour to keeping an eye out for the thousand-year-old Allerton oak tree.

Thanks to Liverpool's extensive coastline, there are plenty of hidden scenic riverside walks, including this one along the Speke Garston Coastal Reserve.

This picturesque beauty spot is a nature area with a waterfront trail, and can be found in the most unlikely of places.

Brimming with wildflowers and bracken, the site is a haven for wildlife including gold finches, swallows and different species of butterfly.

To reach it, head down Banks Road, by 24/7 Fitness Gym, this then leads onto Blackburne Street and down to a mini roundabout.

Waterloo’s Plaza Cinema first opened back in 1939, and closed the very next day due to the outbreak of the Second World War.

But more than 80 years on, the Plaza Cinema is still standing and remains at the heart of the local community, thanks to its team of volunteers who keep it running.

Duke Street Market sits inside a former derelict warehouse in the city centre and opened its doors back in June 2019.

The project, from Graffiti Spirits Group and Urban Food & Drink, has been hugely popular ever since, with a host of independent traders serving food and drink.

One of the Georgian quarter’s most-loved restaurants, The Quarter serves up everything from breakfast to pizza, pasta and cake.

The Italian-inspired café is perfect for a quiet meal, breakfast or a coffee stop, with a vibrant atmosphere and stunning views of the Liverpool Cathedral.

This hub of creativity is relatively hidden in the city centre .

Set up by three mums who met while doing the school run, MerseyMade is a creative space to shop, eat, attend events and have a nosy inside artist's studios.

Stocking a range of local creations from art work and jewellery to gin and gifts, the hub's founders are hoping the quirky spot will provide a safe space for Liverpool's thriving creative scene.

Nestled along the Wirral shoreline near Rock Ferry Bypass, The Refreshment Rooms looks out across the River Mersey towards Liverpool’s Brunswick Dock.

Previously the Admiral pub, the restaurant launched in 2012 and took back its former name of The Refreshment Rooms.

Since then, it has been refurbished several times, speeding through the ranks on TripAdvisor and becoming known as a popular gastro pub.

The restaurant features several pieces of history within its walls, including a bar made out of repurposed wood from Wirral Grammar School and an enormous glass chandelier that once hung in Cunard House.