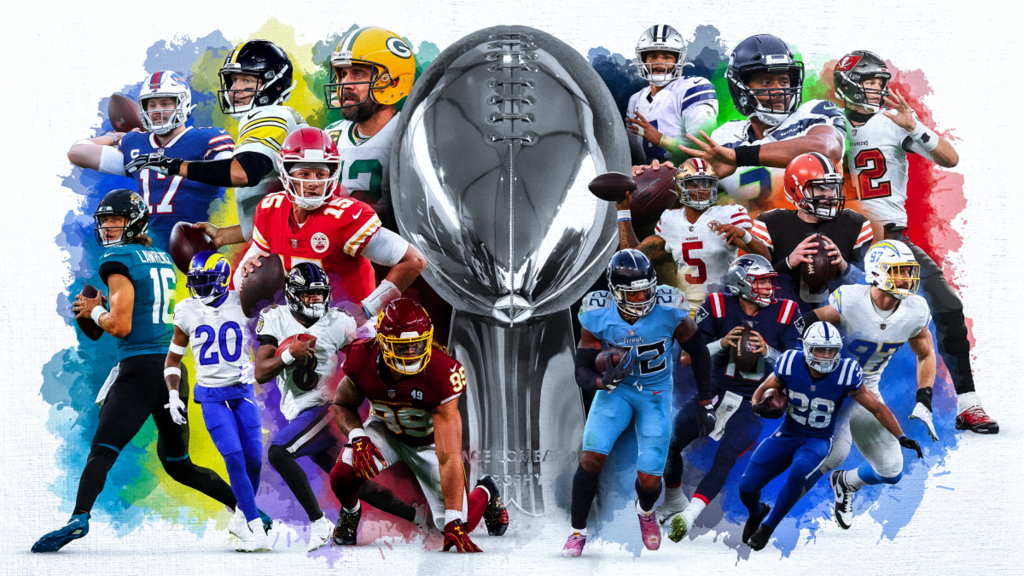 The 2021 season has officially arrived. Will the Bucs repeat as Super Bowl champions? Will Aaron Rodgers put together another MVP season? Will Patrick Mahomes and the Chiefs find a way to the Super Bowl for a third straight season? Will Matthew Stafford find success with his new team?

Awards are largely tied to story lines—so I’m picking Matthew Stafford for MVP, because I think he’s going to be excellent, and because I think the difference he’ll make for the Rams will be noteworthy. That said, I believe Aaron Rodgers and Josh Allen will be right there with him, and then will wind up playing each other for the whole thing in Stafford’s home stadium. Rodgers has been in the championship round two years running and, for all the noise about his displeasure with the state of affairs in Green Bay, the roster he’s on is loaded. And I think we’re going to see Allen reach another level in 2021 and get the Bills all the way back to the big game.

Mac Jones’s winning the Patriots QB job has me optimistic for the real start of the post–Tom Brady era in New England. With a quarterback trained by Bill Belichick’s best friend in coaching, the Patriots can return to the top of the AFC East. But there’s another resurgent team ready to steal the show—the Matthew Stafford–led Rams. After 12 years stuck in Detroit, Stafford is finally on a team where his 4,000- (or 5,000!)-yard passing seasons should not go to waste, and Sean McVay now has the QB he needs to capitalize on the Rams’ always-all-in roster-building approach. The Bucs were the first team in 55 Super Bowls to play for a Lombardi Trophy on their home turf last year, and I’ll boldly pick L.A. to follow suit this year, in Super Bowl LVI at SoFi Stadium.

This will be a fun season, as it’ll feature a return of the Patriots to the playoffs and, with it, a renewed appreciation for Bill Belichick as a head coach. Despite being the greatest coach in modern history, he has been awarded Coach of the Year only three times. His reputation took an absurd, momentary dip in the wake of the Tom Brady divorce and New England's first missed playoff appearance in more than a decade. But the reenergized, Mac Jones–led offense will forge a new energy in Foxboro. Meanwhile, a pedestrian offense in Jacksonville will help Trey Lance edge out Trevor Lawrence for Rookie of the Year, despite a solid performance from the No. 1 pick. Lance’s season-long situational usage, which will eventually lead to starters' snaps before the trade deadline, will be electrifying in spurts, leading to significant optimism for the 49ers in 2022. At the top of the award category, it’s quite boring but also underlines just how phenomenal of an era we’re in. Rodgers will become the first repeat MVP since Peyton Manning in ‘08, and Henry will continue to alter what we expect out of a heavy-usage running back.

What do you call a man who picked two NFC East teams to make the playoffs? Bold! Unafraid! An idiot! Fair enough. But the NFC is bottom-heavy—the best team I left out of the tournament is the Saints, whose quarterback is Jameis Winston. While he might turn his career around, I can live with that omission. As you can see, I am a believer in Bill Belichick (always), Patrick Mahomes (always and forever) and the Joe Judge–Daniel Jones combination (for at least another 15 minutes). But my big takeaway from making these predictions was that the most obvious pick to win their division is the Packers, which reinforces just how absurd it is that they ever thought it was time to move on from Aaron Rodgers.

My baseline feeling is I could have filled this out five times and come to five wildly different conclusions. I could see around six teams being capable of winning the whole thing, and their chances will depend largely on health and injury rates, not to mention COVID-19.

I really like the Bills in the AFC, especially on offense, and I buy the Browns hype, even if it feels like this is a movie we’ve seen before. But given how the Chiefs reconfigured on the offensive line this offseason, I don’t want to bet against Patrick Mahomes. So while I think all three of those teams are capable of winning the Super Bowl, he alone—and how the Chiefs helped him this offseason—tipped my pick toward Kansas City. Out on a limb, I know.

In the NFC, I felt even more conflicted. I like the whole NFC West; I feel like they could all be in the playoff mix. I think Matthew Stafford tips the Rams in the right direction, back toward the Super Bowl. But I’d give a slight edge in overall roster strength to San Francisco, and, if we’re splitting hairs, I’d give the same slight edge to Kyle Shanahan over Sean McVay. But because L.A. has the established quarterback and San Francisco appears headed to platoon city, I like the Rams to win the division and the 49ers to gain momentum, then beat the Rams in the playoffs, in a matchup of young offensive savants.

In that scenario, a Kansas City–San Francisco rematch in the Super Bowl, I like the 49ers, their depth and what Shanahan learned from the loss two years ago. I know, I know. I’m not taking my own advice. I’m betting against Mahomes and one less-celebrated quarterback or two of them. But there’s just so much to like about the Niners, if they can sort out their quarterback situation. Trey Lance becomes a star; Brandon Aiyuk a top-10 wideout; George Kittle a Comeback Player of the Year candidate. Shanahan affirms his “genius” by utilizing two quarterbacks throughout the season, switching and swapping more than ever previously seen. And San Francisco fully returns to its glory days with the most complete roster in pro football—and a healthy one devoid of so many injuries that cost them a year ago.

As usual, I am showing my Packers bias, but I am more confident in picking them this year than I have been in a while. They were a couple of plays from the Super Bowl in their second straight NFC championship game last year, and I believe the third time’s the charm. Aaron Rodgers can easily compartmentalize his issues with the front office; he is a pro and will play his usual MVP-caliber football. As for the Bucs, “run it back” sounds great but usually doesn’t work out. I expect dramatic improvement from the 49ers and Chargers, both of whom will be knocking on the door of the Super Bowl with young quarterbacks. Speaking of young quarterbacks, Zach Wilson will not be a winning quarterback this year on a bad team, but he will make enough wow plays to fill highlight reels and garner OROY votes. But it will be Trey Lance who will eventually be playing and winning. And I believe Brandon Staley will turn around the fortunes of the Chargers, a club that has perennially been a sore luck group.

I’m doing what no one else in this industry has the courage to do: picking the Chiefs to win the Super Bowl and Patrick Mahomes to win MVP. I will now spend the coming months carefully distributing my weight across the limb onto which I have climbed. If you want a bolder prediction in the AFC, the Steelers will bounce back behind a defense complemented by a more aggressive offense. Ben Roethlisberger is no longer one of the best pure throwers in the game, but folks are acting like he’s 2015 Peyton Manning despite the fact that last year Roethlisberger showed he can still push the ball downfield when needed (and the “can’t throw the deep ball” narrative is awfully similar to one that surrounded Tom Brady circa Thanksgiving '20). Newly promoted OC Matt Canada will simply have to be more willing to put his quarterback in harm’s way, which is what seemed to fuel Pittsburgh’s reluctance to open things up last season. In the NFC, the Packers are still great, Sean McVay expanding his offense with Matthew Stafford will make up for the defense’s mild regression in L.A. and the Bucs will be better than they were last regular season, especially with Brady’s basically taking command of the offense. You can pick any of those three teams—or the 49ers, after Trey Lance steps into the lineup and the offense shifts into hyperdrive—as NFC champs and I wouldn’t point and laugh at you.

First off, I need you to know that I can’t believe I’m being that guy. I’ve never been that guy, and I’ve always made fun of the people who do this. Picking a Super Bowl rematch is almost always foolish. And yet here I am, potentially for the first time in my life. (Truth be told I spent much of the summer thinking I’d pick the Rams to come out of the NFC, but then that pick became way too trendy.) While we’re telling truths, I don’t think I’ve ever even picked Tom Brady to reach the Super Bowl in the five years I’ve been making preseason predictions for SI/MMQB, which of course means I’ve been wrong more than I’d like to admit. So count me in as the only MMQB staffer who thinks the defending Super Bowl champs, who got better as the season went along, who return every single key player from last year’s team, including Tom Freakin’ Brady, will find themselves back in the big game. But I also still love the Chiefs—their talent, their coaching and now their hunger to get back and prove they fixed what was wrong last year. Give me the same teams, but now both of them at full strength (hopefully, for the viewers’ sakes). And lots of points. My picks are otherwise pretty chalky, with lots of teams returning to their perches atop their respective divisions. But I guess if you’re already picking a Super Bowl rematch, go all in on the chalk.