In Attack of the Clones, characters use the appellative “m’lady” more times than you remember. If you wanted to play a drinking game where you take a shot every single time Anakin, Obi-Wan, Yoda, and Mace Windu address Padmé as “m’lady,” you’d be drunk much quicker than you think.

This is another way of saying Attack of the Clones has weird dialogue and a reputation for being the most stilted and strangest Star Wars film. And yet, 20 years after its release in 2002, Episode II remains the most important film in the franchise. It’s not the best, but this single movie changed the Star Wars universe more than any other film set in a galaxy far, far away.

When you consider what’s been going on with Star Wars in the past few years, it’s shocking how much of it has directly grown out of Attack of the Clones. It was Hayden Christensen’s first film as Anakin Skywalker, and now he’s reuniting with Ewan McGregor in the new Disney+ series Obi-Wan Kenobi, along with Joel Edgerton and Bonnie Piesse, who play Owen and Beru, respectively.

Episode II also marked the moment we learned that Boba Fett (Daniel Logan) was a clone of Jango Fett (Temuera Morrison) and that Fett’s DNA was the model for the Clone Army of the Republic. The recent series The Book of Boba Fett and The Mandalorian Season 2 featured the “return” of Morrison as Boba Fett, even though his face only appeared in one Star Wars film ever, again Attack of the Clones.

Additionally, the entirety of two Star Wars series — both versions of The Clone Wars — and aspects of The Bad Batch also rely on events that occur in Episode II. Although it was a spoiler at the time, this movie also established that Yoda could fight with a lightsaber for the first time. From Death Star retcon to the first appearances of ships that look like Star Destroyers, Attack of the Clones changed the story of Star Wars and its larger canon forever.

Attack of the Clones was the first “Hollywood” movie shot entirely on a digital camera. During its theatrical run, George Lucas approved certain theaters to project the movie digitally. This sounds odd because digital projection and making movies on digital cameras are so commonplace now. But at the time, Lucas was pushing the boundaries of how people thought about movies (basically, they weren’t films anymore).

In this way, Attack of the Clones was Lucas’ most technologically and stylistically risky movie. And yet, as a follow-up to The Phantom Menace, it was also a much safer Star Wars movie because it looked more like the original trilogy than Episode I.

“Attack of the Clones also kicked much more ass.”

While The Phantom Menace featured a lot of things audiences had never seen before (Naboo, podracing), the visuals of Attack of the Clones were instantly more familiar as a Star Wars film:

Attack of the Clones also kicked much more ass than The Phantom Menace. Lightsabers are out constantly, spaceships look amazing (including two vastly underrated Padmé ships), and Mace Windu gets a purple lightsaber! There’s no other Star Wars movie with this many people swinging lightsabers in one scene, making the Battle of Geonosis one of the most epic and dizzying moments in all of Star Wars.

For those who criticized The Phantom Menace and accused Lucas of being out of touch with what made Star Wars great, he both doubled down on the first prequel film’s aesthetic but also threw old-school fans a bone with Attack of the Clones. While it wasn’t a George Lucas mic drop, Episode II was a moment where he threw ten thousand lightsabers on the screen and said to the fans: How do you like me now?

Attack of the groans

If there’s one aspect of Attack of the Clones that was then — and still is — consistently lambasted, it’s how Padmé and Anakin’s romance lacks realism, or at the very least, chemistry. Anakin admits to murdering a bunch of Tusken Raiders, and Padmé later says she “truly, deeply” loves him. Anakin’s infamous remark about how he hates sand also comes from this movie, as do a few on-the-nose clunkers, like “I wish I could just wish my feelings away.”

However! George Lucas didn’t do this by accident. In the 2020 book The Star Wars Archives: 1999-2005, Lucas makes it clear he knew exactly what he was doing with the dialogue in Attack of the Clones. Behold, the maker in his own words:

“Let’s face it, their dialgoue in that scene [by the fireplace] is pretty corny. It is presented very honestly, it isn’t tongue in cheek at all and it’s played to the hilt. But it is consistent, no only with the rest of the movie, but with the overall Star Wars style. Most people don’t understand the style of Star Wars. They don’t get that there is an underlying motif that is very much like a 1930s Western or Saturday matinee serial. It’s in the more romantic period of making movies and adventure films. And this film is even more of a melodrama than the others.”

The degree to which you buy this defense is likely affected by when you first experienced Attack of the Clones. For the legions of fans who had grown up with the classic films, the idea that Star Wars had always been written like this was a dubious claim. And yet, if you grew up or came of age with the prequels, Lucas outright admitting Attack of the Clones was a melodrama was an epiphany.

GenX worship of Star Wars tried to codify what it could and couldn’t be. With Attack of the Clones, George Lucas tried to make that audience happy and push his strange, uncomfortable epic into new territory. Twenty years later, it’s easy to see Lucas was right and the haters were wrong. Attack of the Clones works because it’s not trying to be the best movie ever. Its flaws are part of why it works.

Anakin says the problem with sand is that “it gets everywhere,” and the same is true of incorporating campy elements into a sci-fi blockbuster. Once you get a little campy, it tends to spill over into everything.

Star Wars: Attack of the Clones is streaming on Disney+.

Inverse may receive a portion of sales if you subscribe to Disney+ through the link. 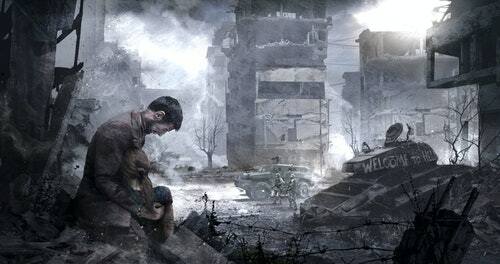 8 years ago, one remarkable indie changed war video games forever
'This War of Mine' is proving to be a timeless game thanks to strong aesthetics and thoughtful soul-searching.

The actor’s role in the upcoming series ‘Ahsoka’ remains unknown