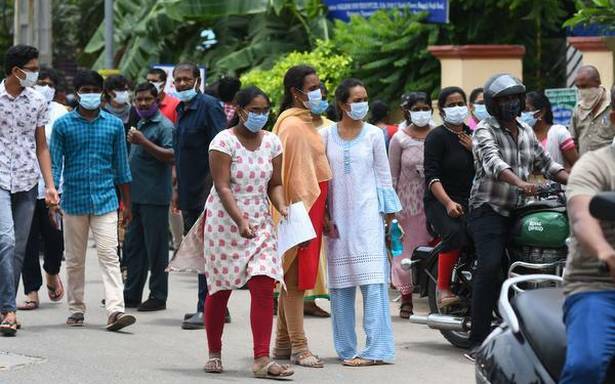 Four students from Andhra Pradesh and three from Rajasthan were among the 18 candidates who shared the top rank in the JEE-Main examinations, the National Testing Agency (NTA) announced in the early hours of September 15. A total of 44 candidates achieved a 100 percentile score.

As of 2 a.m., the overall results had still not been declared, leaving the 9.34 lakh candidates still waiting for their scores and ranks.

Once the results are declared, students can check their scores as well as the final answer keys at jeemain.nta.nic.in.

This year’s examination was marred by an alleged cheating scandal at one centre in Sonepat, Haryana where computers were hacked to provide illegal assistance to students who paid up to ₹15 lakh. So far, 11 people have been arrested and a Central Bureau of Investigation probe is ongoing. It is not clear yet what action NTA will take against students who were involved in the scam.

JEE Main is used as an entrance test for admission to undergraduate engineering programmes at the National Institutes of Technology, and several other Central, State and private institutions. The top 2.5 lakh ranked candidates are also eligible to appear for JEE Advanced, which is the admission test for the elite Indian Institutes of Technology. Last year, the Common Rank List cut-off score was set at 90.37.

JEE Advanced will be held on October 3. Registrations for the exam, originally scheduled to open on September 11, have been postponed because of the delay in declaring JEE-Main results.

This year, the computer-based JEE-Main examination was offered four times, with the last two sessions postponed due to the second wave of the COVID-19 pandemic. Students were allowed to attempt the examination as often as they wished, with their best score being used for ranking purposes.