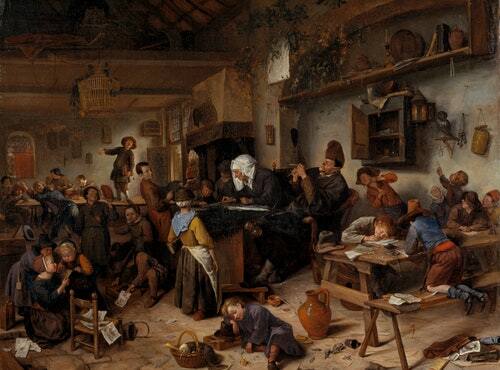 October 5 was World Teachers’ Day, and we asked Inverse Daily readers to share their one-sentence stories about the best unconventional teachers. You all responded in remarkable style.

We’re sharing some of our favorite stories below as a way to kick off the week on a positive foot.

“At Basic Nuclear Propulsion School while in the Navy, a Navy chief taught me the Order of Operations using the pneumonic PEMDAS. I went on to become an engineer. During my high school years, not one teacher had bothered to teach it this way, and I was a terrible math student. Simple methods often have enormous consequences.” —Thomas

“When I went up to protest my first C of junior high from Mr. MacIntyre in 1974, he taught me that revenge has no expiration date — when he informed me that my father had given him his first C in junior high in 1961.” —William

“Ms. Dina Giovanelli taught me to let people be who they feel they are without question.” —SuZanne

“My sixth-grade teacher, Ms. Freddi, provided inspiration in how she lived her life away from the classroom at the end of the school year by being a participating member of the Greek Opera in Athens.” —Cathy

“Mother: Learn how to spell people’s names; it’s the only thing that is truly theirs.” —Deborah

“My best teacher was my high school chemistry teacher Mr. Kauffman. His famous ‘You know, You know, You know’ was a stress on what you really needed to know to understand the subject fully.” —Bill

“Mr. Rule. Taught me that nothing in life comes without effort — even if I want to win the lottery, still have to buy the tickets to play.” —Monica

“My high school Physics teacher, Mr. Harper, taught me, by example, that it is best to give credit/kudos to the best solution, especially if it is a variant based on your idea that you were really passionate about.” —Eugene

“When I was a junior in high school, someone nominated me for Senior Class Secretary. In class, we were discussing options and responsibilities. One guy said he didn't want to be anything. So, we discussed a “declining the nomination” option. So, I quickly declined the nomination. The teacher later walked by and whispered to me, asking, ‘Are you afraid you'll lose, or are you afraid you'll win?’” —Dianne

“High School Journalism teacher: Don’t give up when the odds are against you; even the smallest school newspaper can win awards if we’re good enough.” —Deborah

“My most unforgettable teacher was Dr. Dodson, who taught World History 101 and 102. He would lecture both semesters without a scrap of paper or a book, and my mission became to find a mistake in his lectures. Never did find one and developed a love of history in the process.” —George

“My teacher of American Government had us choose a topic currently being discussed in Congress and follow it by reading the Congressional Digest every day throughout the semester.” —Debbie

“Ms. Taylor, who powdered her poodle hair cut with baby powder, taught me to read through love and patience.” —Rose

“Mrs. Jawerski was the sole lay teacher at the Catholic Grade School I attended; less concerned with saving my soul than showing me the wider horizons attainable by a female with a brain.” —Anonymous

This is an adapted version of the Inverse Daily newsletter for Monday, October 11, 2021. Subscribe for free and earn rewards for reading every day in your inbox. ✉️

NASA may still rename the controversial Webb Telescope — NASA shows no signs of relenting on its stance not to rename the James Webb Telescope, but a New York State Senator suggests this it's a long game.

Go deeper into the Webb Telescope:

A new meteor shower? — The Arid meteor shower rained down on Earth's night skies for the first time in October 2021.

Asteroid Bennu — Bennu is billions of years old, so how have its massive rocks not eroded into dust? It turns out they're pretty porous, giving them unique defenses.

Rivian R1T: 9 amazing features — The Rivian R1T is packed with clever innovations. Alone, any one of them would be a “that’s neat” aside, but all combined, it turns the Rivian into something extraordinary.