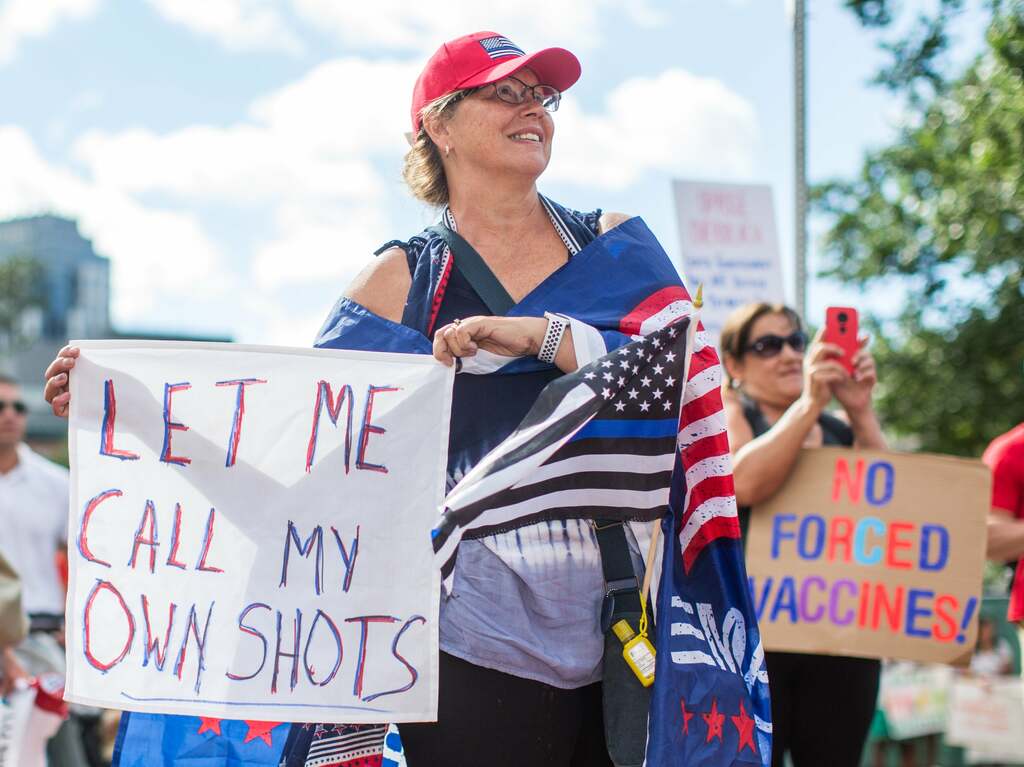 Scientists across the globe have continually asserted that the COVID-19 vaccine is safe and effective (as they all are), but anti-vaccination advocates refuse to budge on their controversial views, opting to eat horse dewormer — which actually is dangerous — instead.

This got us thinking: Wouldn’t it be nice if there was a vaccine for ignorance? Yes, but then of course, they wouldn’t take that one either. Alas. Here are ten examples of why we wish people could receive treatment for being obtuse.

Right-wing extremism expert Jeff Sherlet explained that anti-vaccine ideology has roots in white supremacy, recalling that, historically, the anti-vaccine movement has largely been based on the false belief that white people have “natural immunity” due to their claimed superior genes. Therefore, white supremacists — or those who empathise with white supremacist ideology — often convince themselves that they don’t “need” to be vaccinated. “It goes back to the 19th century where you start encountering terms like ‘medical tyranny’, ‘medical liberty,’ ‘natural immunity,’ and then, it’s conflated with whiteness,” he told Chris Hayes. “This idea that white people somehow, through their good genes — ‘very good genes,’ as Trump would put it — have that immunity.”

Such is not actually the case.

Anyone who has actually seen COVID patients knows this is wrong

You must be a complete idiot to be pushing natural immunity as a viable option after soo many people have died from COVID & reinfection has occurred on more than one occasion https://t.co/StEGwVmO01

We’ve always been told not to believe everything we see, and yet, here we are. TikTok user Gray Fagan took to the platform with a satirical video, broadcasting a very clearly faked mock-up of a newspaper headline, “VACCINE BANDITS take over Los Angeles streets.” In the clip, he said — in jest — that the aforementioned “bandits” “walk up to you on the streets and ask you if you’re vaccinated and if you hesitate at all they inject you with a vaccine right on the spot.”

“And then they throw a vaccine card at you right after they inject you. They even leave it blank so you can fill in your name,” he said.

The video was clearly a joke — which he confirmed to The Daily Dot — but a lot of people genuinely believed the blatant lie was fact, which is concerning.

Why is no one talking about the “vaccine bandits”in LA rn ? These guys go up to random people and ask if they’ve had the vaccine if u hesitate they inject u on the spot very quickly , throw a COVID shot record card @ them &’ leaves a note saying they’ll be back for the 2nd dose

Sign up to our free Indy100 weekly newsletter The Viral Democracy.

In the fictional film “I Am Legend,” people turn into zombies after being infected with a genetically reprogrammed virus. But even still, anti-vaxxers took the plot line and ran with it — very, very, very far into the distance — and not only decided that this was somehow the truth, but that the vaccine would do it, too. As in — turn them into zombies. The rumour got so out of hand that Akiva Goldmsna, who wrote the movie, was forced to take to Twitter and remind the public: “It’s a movie. I made that up. It’s. Not. Real.”

Some anti-vaxxers are seriously avoiding the vaccine because they’re worried about a fictional zombie film. https://t.co/snpi94NstM

As you likely know by now, Nicki Minaj opted out of attending the Met Gala due to the vaccination requirement and faced immediate backlash for having been vaccinated. Minaj then attempted justify her decision by telling her 22 million followers that her cousin in Trinidad’s friend “got it & become impotent. His testicles became swollen. His friend was weeks away from getting married, now the girl called off the wedding. So just pray on it & make sure you’re comfortable with ur decision, not bullied.”

Swollen testicles are not a side effect of the vaccine — though various other conditions can cause the problem. Thus, thousands of experts took to Twitter to debunk her claim, including Dr. Florian Krammer, a virologist at Mount Sinai:

Chlamydia is a more likely explanation - and may also explain why the relationship ended. While there is unfortunately no licensed vaccine against chlamydia yet, there are vaccines against other STDs, like HBV and HPV. Maybe spread that information instead of misinformation.

Dick Farrel, a right-wing radio host who called COVID-19 a “scamdemic” and advised his followers not to get the vaccine, died due to complications from the coronavirus. The controversial broadcaster regularly campaigned against vaccination and criticised Dr. Anthony Fauci, calling the immunologist a “power tripping lying freak.” But Farrel’s close friends say that upon being hospitalized with the virus, he quickly changed his mind regarding vaccination.

Prior to falling ill, however, he wrote, “Vaccine Bogus Bull Shid!, [sic] Two peeps I know, got vaxed, now have Corona, hospitalized critical. Thank you Moderna, FOR NOTHING.” The openly ardent Trump supporter also doubted the reality of a Delta variant, implying “FOOT-chee” (his nickname for Fauci) conceptualized it when Americans weren’t “falling for” the subsequent coronavirus waves. “So, presto! Delta Variant.”

A longtime FL radio host Dick Farrel rallied against vaccines. “Why take a vax promoted by people who lied 2u all along about masks.” After battling COVID for three weeks, Mr. Farrel texted his friends urging them to get the vaccine, his last texts before his death. pic.twitter.com/mPlT4M3KsU

Then another conservative anti-vax radio host died of it too

Marc Bernier, a conservative talk show radio host from Florida died after a three-week battle with the virus at just 65-years-old, making Bernier the third right-wing radio host who publicly condemned vaccination to die from Covid.

Prior to becoming infected, he proudly dubbed himself “Mr. Anti Vax” live on-air.

It’s with great sadness that WNDB and Southern Stone Communications announce the passing of Marc Bernier, who informed and entertained listeners on WNDB for over 30 years. We kindly ask that privacy is given to Marc’s family during this time of grief. pic.twitter.com/vXQIAtVN9e

Covid “truthers” might be averse to to getting vaccinated and wearing masks, but they are willing treat their Covid infections by drinking horse-strength tubes of medication meant to deworm horses.

Some questionable medical groups have pushed the de-worming medication, despite no research confirming Ivermectin’s effects on COVID-19. But that hasn’t stopped anti-vaxxers from raiding tractor and animal supply stores in search of the drug, both in the form of paste — and, well, injection (…do they see the irony?). However a dose meant for a horse is obviously significantly larger than one intended for humans, and people began to unintentionally poison themselves.

Nobody is simplifying “ivermectin is horse medicine”

People kept taking horse dewormer even after those people accidentally poisoned themselves, and despite the fact that there is little to no evidence proving it helps

People would not stop taking horse-strength dewormer to the point that the FDA had to step in. The federal agency took to Twitter to address the troubling trend, writing: “You are not a horse. You are not a cow. Seriously, y’all. Stop it.”

Despite there being little to no evidence that ivermectin actually prevents or treats the coronavirus, anti-vaccination groups continued to push the narrative that it’s a miracle drug, encouraging each other to purchase it in the form of horse and livestock dewormer. As to be expected, people kept getting sick: Poison control centres saw a drastic increase in calls regarding ivermectin since the summer, with 70 percent of calls to Mississippi poison control have been from people who ingested ivermectin in the form meant for livestock.

Anti-vaxxers started wearing masks…to protect themselves from the vaccinated

It’s all “my body my choice” until someone gets vaccinated in your vicinity. Indeed, despite anti-vaxxer’s adamant anti-masking mentality, they finally considered wearing them when it came time to “protect” themselves from…the vaccinated.

“There is something being passed from people who are shot up with this poison to others who have not gotten the shot,” said Larry Palevsky, a New York pediatrician and anti-vaxxer, during an anti-vax livestream, during which he also said that people who had been vaccinated should “have a badge on their arms that say ‘I’ve been vaccinated even though it’s not a vaccine’ so that we know to avoid them on the street, to not go near them anywhere in society.” Soon, anti-vaccine communities expressed a desire to cover their faces for “protection.”

Basically: The same group of people protesting masks…now wants them…to protect them against…the other people in masks? We give up.

I am going to be watching these vaccine shedding stories like a hawk. Is my family going to need to wear masks to protect ourselves from the vaccinated?

Vaccine resistance is killing innocent people who don’t even have Covid, because those who won’t get vaccinated are crowding ICUs.

Lastly, we wish there was a vaccination to trigger some empathy: Because innocent people are dying due to others’ selfish refusal to get the vaccine. ICUs across the United States are filled far beyond capacity with people who contracted Covid — majority of whom are unvaccinated — so people with other life threatening conditions can’t get the treatment they need.

One recent example: Ray Martin DeMonia of Alabama, who died of heart complications just three days shy of his 74th birthday after 43 hospitals across three states were unable to treat him when their ICUs were full.

DeMonia initially suffered a cardiac event at Cullman Regional Medical Center, but when it came time for emergency staff to transport DeMonia to a cardiac ICU, they struggled to find one with availability nearby. After contacting 43 hospitals across three different states, emergency staff ultimately transported DeMonia to Rush Foundation Hospital in Meridian, Mississippi — approximately 200 miles from Cullman, a three and a half-hour drive away.

“In honour of Ray, please get vaccinated if you have not, in an effort to free up resources for non-Covid related emergencies,” DeMonia’s family wrote in his obituary. “He would not want any other family to go through what his did.”