Gold price rises but ₹8400 below its lifetime high. Good opportunity to buy? 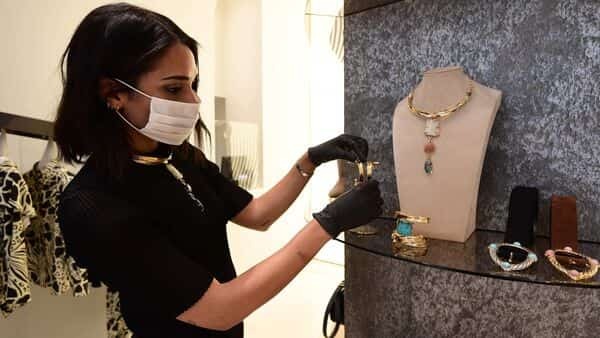 Gold price on Multi Commodity Exchange (MCX) ended ₹74 higher at ₹47,810 levels on Friday, logging weekly gain of ₹355 per 10 gm. However, gold price today at MCX is still around ₹8,400 below its lifetime high of near ₹56,200 per 10 gm. According to commodity market experts, MCX gold rate has been on the downside for last one and half years after making its life time high in August 2020. They said that soaring crude oil price is fueling global inflation that is expected to trigger upside movement in the precious yellow metal price in near term.

As per commodities and currency trade experts, spot gold price is trading in the range of $1780 to $1835 per ounce and it may go up to $1900 to $1910 per ounce levels once it breaks the current hurdle at $1835 levels. They said that rising crude oil price in the global market is expected to further fuel global inflation leading to weakness in the major global and local currencies, which will push gold price further northward.

Speaking on the triggers that may support gold price rally in near term; Anuj Gupta, Vice President — Commodity & Currency Trade at IIFL Securities said, "Recent US economic data indicates serious inflation concerns and this problem is expected to further worsen as crude oil prices are expected to hit $100 levels in near term. In that case, local and major global currencies are expected to become weak and Indian National Rupee (INR) that has appreciated around 74 levels against the US Dollar (USD) in last fortnight may come down to near 74.50 to 75 levels. So, both domestic and international factor are indicating sharp upside movement in gold price in short-term."

Echoing with Anuj Gupta's views; Amit Sajeja, Vice President — Commodity Research at Motilal Oswal said, "In last one fortnight, spot gold price has remained in the range of $1780 to $1835 per ounce and I am expecting that spot gold rates may soon give technical breakout at $1835 levels on closing basis. After this breakout, gold price in international market may soon go up to 1900 to $1910 per ounce levels in next one to two months as market has already discounted the interest rate hike announced by the US Fed."

Unveiling investment strategy for gold investors, Ami Sajeja of Motilal Oswal said, "Short term should maintain buy on dips strategy till spot gold is trading in $1780 to 1835 per ounce range maintaining stop loss at $1760 levels. However, if a gold investor has medium term time horizon for next 2-3 months, he or she can hold its position for $1900 to $1910 per ounce target."

Speaking on gold price outlook in domestic market; Anuj Gupta of IIFL Securities said, "Currently, MCX gold price today has strong support at ₹46,500 levels whereas it has immediate support at ₹47,200 levels. So, short term gold investors can buy gold at current market price and keep on accumulating till it is above ₹47,450 per 10 gm levels maintaining stop loss at ₹47,200 levels for immediate short-term target of ₹48,200 per 10 gm. However, for medium-term investors who have 2-3 month time horizon, I would suggest them to start accumulating at current levels maintaining stop loss at ₹46,500 levels. MCX gold rates may soon hit ₹48,700 levels. Once, the precious metal breaks this important hurdle we can expect it to go up to ₹49,500 to even ₹50,000 levels by end of March 2022."