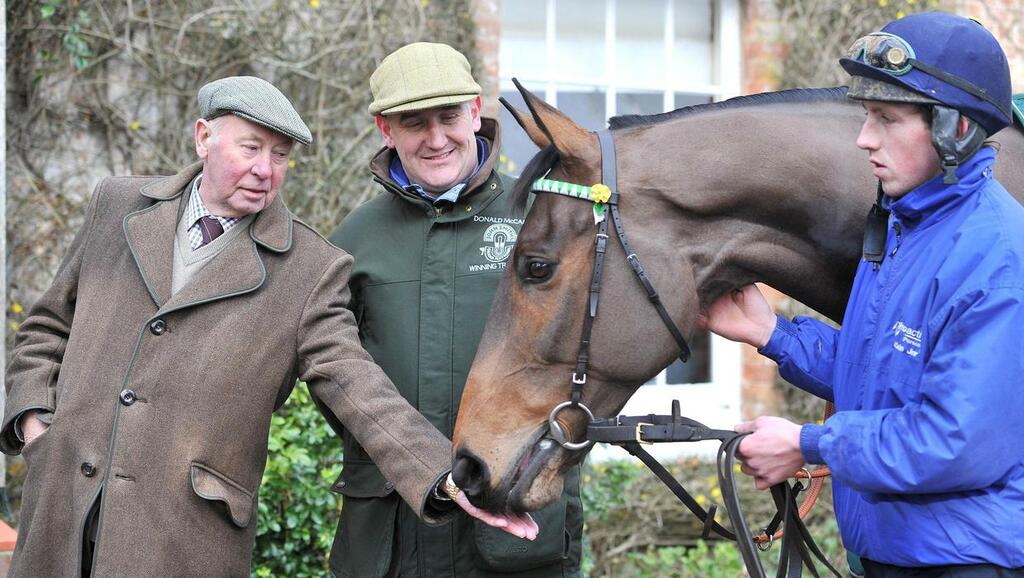 Willie Mullins and Donald McCain led the tributes to three-times Grand National-winning owner Trevor Hemmings who died on Monday evening at the age of 86.

Hedgehunter provided Mullins with his first and only victory to date in the Aintree Grand National 16 years ago under Ruby Walsh.

Mullins said: “We had a great day with Trevor Hemmings and Hedgehunter.

“It was a dream come true to win the National – it gave us one of the great days in my training career.

“He (Hemmings) was a man who it was an honour and a pleasure to train for.”

McCain trained Ballabriggs to provide Hemmings with a second Aintree success in 2011 following on from Hedgehunter (2005) and added to by Many Clouds (2015).

Having also had horses with his father, Red Rum’s trainer Ginger, McCain explained while also losing a huge supporter, his family were mourning the loss of a friend.

“It was a huge shock. He’d been in touch fairly recently and he even used to ring my mum now and again just to keep an eye on her,” said McCain.

“Obviously, he was fantastic to me. Dad trained for him in his latter years, but for me as a first-season trainer, to have horses for Trevor Hemmings was a huge thing and he supported me every year through thick and thin for every year that I’ve been training.

“He’s been a wonderful man for me and a lot of other trainers. He was very fair and while it’s corny, he was just a gentleman. He was a wonderful supporter to me, you can’t underestimate the reason why he was so successful and that is because he allowed you to train horses the way they should be trained.

“He was not just a great man but he was a great friend to the family as well.

“Cloudy Lane was the first good horse I had for him and Mr Hemmings bred him as well, we had some great fun with him even before Ballabriggs came along, he won at the (Cheltenham) Festival and was favourite for the National the following year (finished sixth).

“It was no fluke that he won three Grand Nationals, he allowed you to do the job, he never rushed you.

He told Sky Sports Racing: “It was a real shock to get a text from David Minton (bloodstock agent) last night. He’d been in really good form recently, he hadn’t been in any ill health, so it was a huge shock.

“We had some great days with Many Clouds and I’ll be forever in their debt. Without Trevor’s input I wouldn’t have even run him in the National because I thought it was a year too soon.

“After his slightly disappointing run in the Gold Cup, Trevor said we had nothing to lose and the rest is history.”

Reflecting on that National success, Sherwood added: “I won’t forget that weekend for as long as I live. Trevor flew down the next day in his helicopter and celebrated with all the locals in Lambourn and paid for everybody to have a drink.

“It was a huge turnout in the centre of Lambourn, which will stick in my mind forever. We’ve still got a huge picture in our yard now of ‘Clouds’ in the square in Lambourn. They were very special days.

“Many Clouds was one of many good horses Trevor owned. I think he had a soft spot for all his National winners.

“Trevor would be the first to say he was a very lucky man to have the horses he did, but then he enjoyed the highs and knew the lows that came with owning racehorses. He knew the game inside out as well, which is very important.

“He was the perfect owner. He let us get on with it and knew we knew the horses better than anybody.”

Former champion jockey Richard Johnson, who rode many winners in the Hemmings silks, said: “I was very, very lucky, Trevor was a big supporter of Philip’s (Hobbs) and Henry Daly’s.

“I rode a lot of winners for him over a long period of time, he was always a great character.

“He was self-made, he’d done everything and I think he loved all sport, he loved racing and he understood the good and the bad.

“He always loved the Grand National and he bought those lovely big chasers that he knew took a lot of time, he used to joke ‘I’ve had him forever, one day we might win a race’ – a character like that, you’re really going to miss him.

“It (racing) was his enjoyment, his hobby, he just loved to be a part of it and when he was at Haydock or Uttoxeter or Cheltenham, he was telling jokes rather than worrying about what going to happen in 10 minute’s time.

“It was very sad to hear the news that he’s passed away.”