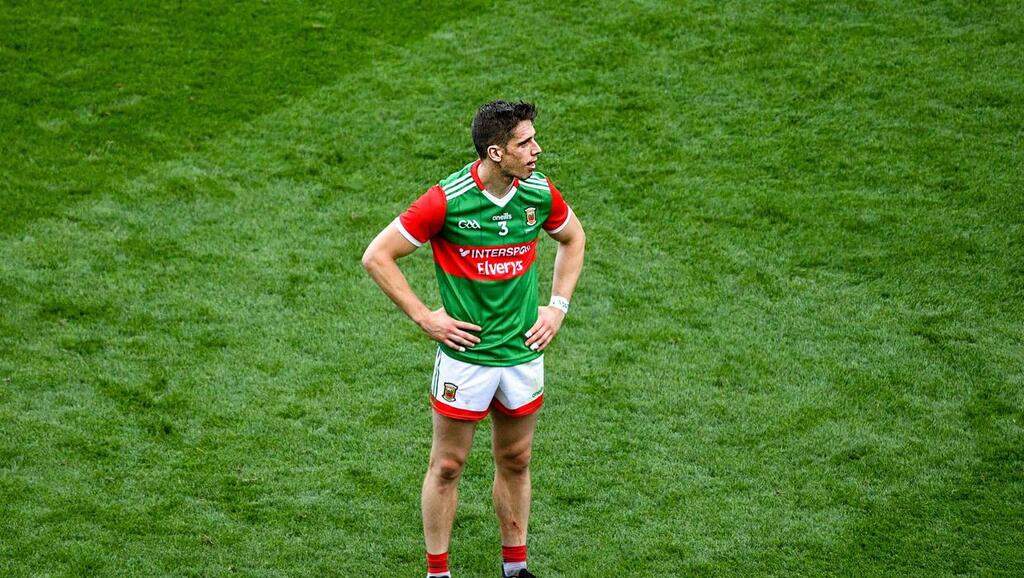 He turns 32 next month, the years bringing him ever closer to a title that is at once a glowing compliment and the worst kind of curse.

Should his football reel run to the credits without the ultimate prize, Lee Keegan will be remembered as the greatest player never to win an All-Ireland.

It would be a legitimate if hugely unwanted legacy for a former Footballer of the Year who in seven (including the 2016 replay) All-Ireland final appearances has invariably invaded the critical exchanges.

He did it again on Saturday, red-blooded and defiant even as all-around him Mayo were reduced to an anaemic shambles in the face of Tyrone’s surge for glory.

If the ultimate measure of an athlete is the ability to perform on the biggest stage, then the Westport force of nature can be name-checked alongside any of the finest to have played the game.

Keegan’s qualities are the kind managers measure in gold – athleticism, endurance, intelligence, consistency, technique, versatility, and a Machiavellian willingness to do whatever is required to get his team across the line.

That latter trait was evident in the iconic image of Diarmuid Connolly’s ripped shirt in the drawn 2016 final or the black card which cut short Keegan’s epic battle with Dublin’s creative mainframe in the replay.

But then, this is a warrior footballer who – as the GPS system that whistled by Dean Rock’s nose as he fired the 2017 All-Ireland final kill shot - has always been prepared to go to the limits and sometimes beyond.

Keegan crossed the line with that crude intervention, but the balance sheet of his Croke Park performances is heavily in credit.

Ask the Dublin players with whom he duelled for a decade about the Mayo figure whose talents they most feared and whose attitude they most respected, and Keegan is – invariably – the first name to trip off their tongues.

Their admiration is for a player they see as a kindred spirit, one who delivered the best of himself at the decisive hour.

The full sweep of his talents can be seen in those explosive forward thrusts which so ignite Mayo's vast platoons of support, an athlete at the peak of his powers, carrying his team into the battle.

Nominally a defender, he gallops across the acreage with the elegance of an accomplished midfielder, finishes – both goals and points – with the poise of a master forward.

If those are the glamorous flourishes, he is equally at home at the coal-face, an adhesive man-marker, a closer of doors, an unashamedly physical green and red fortification, a constant leader in deed.

Keegan’s story has yet to meet his final cover. He is 56 months younger than Cristiano Ronaldo, the Portuguese phenomenon who engulfed another season with that unforgettable Old Trafford homecoming on the very same afternoon Mayo were again unable to escape the shadow of the past 70 years.

Stephen Cluxton won seven of his eight All-Ireland medals after the age of 32, but still, the sense is that the hourglass is emptying for Keegan.

But, if it ends without a visit to the Hogan Stand podium, can we place him at the very summit of those players not to get their hands on Sam Maguire?

His county has others on the shortlist, notably his long-time defensive colleague, Keith Higgins, and the absurdly gifted, poet-footballer Ciaran McDonald.

Dermot Earley Senior's name is branded onto any shortlist of those who lit up the game like Times Square without ever landing the ultimate prize. Ciaran Whelan’s most notable weakness was one of timing, 15 stellar years in Dublin blue ending on the eve of their unprecedented era of dominance. Frank McGuigan was a genius who preceded Tyrone’s days of thunder.

A divine talent like David Clifford has a decade stretching out before him to hook summer’s biggest fish.

Accidents of geography have denied some phenomenal talents a proper run at a Celtic cross. From Matty Forde to Mickey Kearins, Declan Browne to Kevin O’Brien, the game’s back catalogue is littered with aristocratic talents held back by a more artisan support cast.

What sets four-time All-Star Keegan – a fifth surely beckons this year – apart is the sheer volume of his work at the highest peaks, his maintenance of high standards, and an ability over a decade to carry the fight to Dublin, Kerry and, on Saturday, Tyrone.

It would be the easiest – and most patronising – aside to suggest his body of work 'deserves' All-Ireland recognition.

What can be safely declared is that there is hardly a player who has done so much so often, on the biggest mileposts along the September Road, without joining the list of championship-winning immortals.

Keegan is - with respect to Higgins and McDonald - already the greatest of all 21st-century Mayo footballers, his career underpinned by a rare and undimming glow of consistent excellence.

As his 32nd birthday looms, he will likely make the call to relaunch himself into another pursuit of platinum in 2022.

The alternative, after all, is to lay down his sabre and inherit a title that celebrates prowess in so many summer duels but would feel, for one of the swordsmen of the ages, like the most hollow kind of glory.