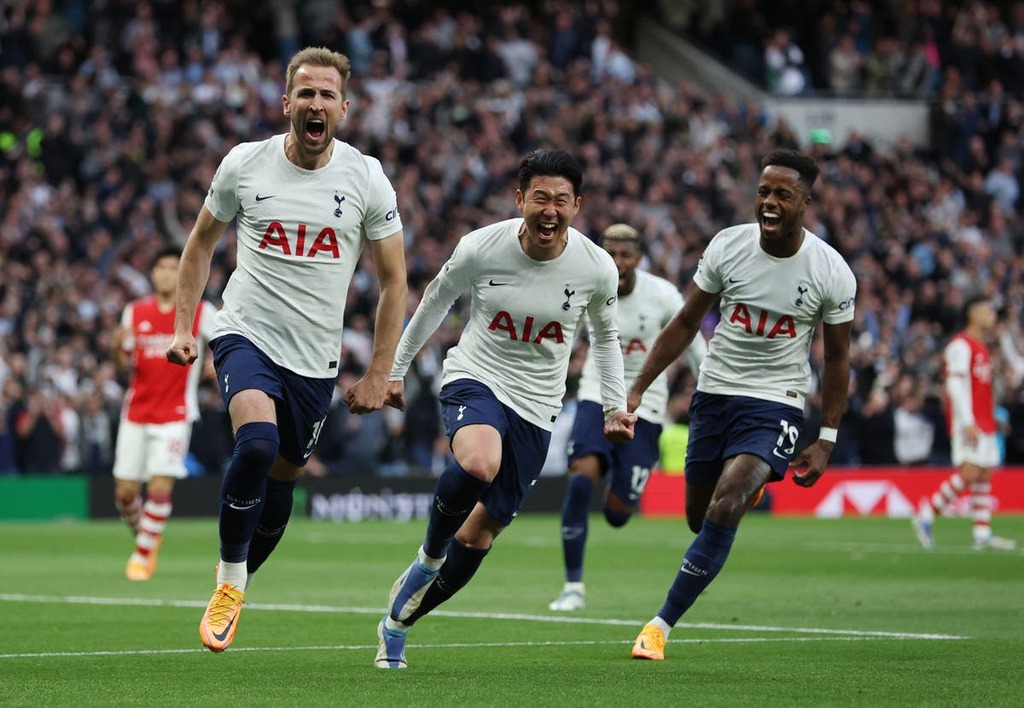 It’s still Arsenal by a nose, just, but that’s after they lost their heads. Tottenham Hotspur might have got the benefit of some decisions, but they also took impressive advantage of Arsenal’s chaotic response to all of that.

Antonio Conte’s side were consequently worthy winners on the night, and full value for this emphatic 3-0 win.

The Italian roused his team to another big win in another big game. It has been the main marker of his time so far. Whether Spurs are a better team, and a better bet for top four, remains to be seen.

It’s entirely possible that this just reveals the difference between the sides on nights like this. Spurs have one of the best managers in world football, as well as some canny and experienced players in their prime – particularly the star scorers Harry Kane and Son Heung-Min – while Mikel Arteta still has such a callow team.

It’s just that this also revealed a pronounced flaw that has been a problem for Arsenal for so long, and something the coach has not yet eliminated. They just have this propensity for chaotic collapse at the wrong moments, usually in the form of red cards. Rob Holding was the latest responsible here, after Cedric Soares had given away a penalty.

There have been so many occasions where they have responded erratically to setbacks within games. They now have to respond to a setback from a game. That is another potential consequence from this.

Spurs will feel they have all momentum. They go within a point of their rivals in the race for fourth place with two games to go, having ripped them apart here. It was quite a fitting first derby in front of a full crowd for this new stadium. The place, duly, was rocking. It was difficult not to think this had an effect on Arsenal’s young side, too. They walked into a cauldron, and now have to recover some spark for an awkward last two games.

They still have the advantage but do they have the belief? Do they have the bodies? That was something else this game brought. Holding will be suspended. Gabriel pulled up. Ben White must not have been fit, which can surely be the only explanation for why Arteta didn’t bring him on after Holding got sent off.

Against this, Spurs were all smooth lines and surging runs. They were also smarter, as the key moment of the game indicated.

Long before that, in what should be the most frustrating element for Arteta, Arsenal had looked the better side.

They were impressively asserted in the first 10 minutes. It did seem as if they could get the draw they needed if they just adhered to the tactical plan.

Football has much more to it than that, though, as Conte – and now Arteta – know all too well.

It almost calls for a new spin on that old Mike Tyson line for this club.

Arsenal have a plan until they punch themselves in the face.

There’s almost no other way to describe what happened here. Yes, many will point to Paul Tierney’s decision, and the softness of that first penalty. Cedric Soares had gone in clumsily on Son but it had initially been difficult to tell whether it was for that, Holding doing similar, or even a handball.

It was not difficult to tell what Kane was going to do. He of course scored.

Spurs had the lead. But they didn’t necessarily have the game. This is what was so galling about Arsenal, what should really make Arteta so furious.

The issue was that you could sense a frantic energy had entered their play immediately after the penalty. The previous focus had gone. It had been replaced by a rush to get things done, and a rashness.

Conte’s side no doubt sensed this. They were repeatedly getting in behind. It seemed another goal was only a matter of time.

Instead, much more predictably, another Arsenal red card for the season was only a matter of time.

Holding had already been playing as if he wanted to assert himself in this match, to be the sort of old-fashioned player that physically dominated a derby, but there was always a danger to that against a player like Son. The Korean had no doubt noted when Holding almost manhandled him early on.

So, from another Spurs break, when the defender probably had Son covered, he so recklessly checked him.

It was definitely a foul. Whether it was a second yellow card is open to debate, but the wider point is you don’t leave yourself open to that so needlessly. You don’t just collapse like that.

That’s again what happened. It could be seen in how players like Gabriel were lashing out, or kicking the ball against the advertising boarding in frustration.

Spurs and Conte could no doubt see that and be entirely content to just keep their concentration. A mere four minutes after the red card, and just 11 after Holding’s first yellow, Kane had his second goal.

A needless corner was given away. Kane was left free at the back post.

Arsenal badly needed half-time only to immediately concede when they came back out. The backline got into an even greater mess as Son just offered the clarity of a clinical finish.

To give Arsenal some due, it looked like it could have got much worse at that point. They did dig in, but there’s no escaping the reality that the table now looks much worse than it did two hours beforehand.

Arsenal still have the most slender advantage possible, but do they have the mettle? Do Spurs have the momentum? This game detonated the chase for the Champions League places, and ensured they will be alive until the final weekend.

Spurs, for their own part, have a capacity for immediately dropping off from such peaks. Arsenal have shown resolve already this season.

There’s never been a more important time to keep the head.