They had waited for hours, after completing the grim task of providing DNA, to learn whether their children had joined America’s ever-growing roll-call of school shooting victims.

When they heard the news, their cries pierced the night.

Some seemed to struggle to walk under the weight of their grief as they made their way to their cars, now returning home one passenger short.

Almost all of Alfred Garza’s family had waited with him in the reunification hub in the small city of Uvalde, halfway between San Antonio and the Mexican border. On his phone he had a photo of his 10-year-old daughter, Amerie Jo, beaming with a certificate she had received that very day at the Robb Elementary School.

Mr Garza had rushed there on his lunch break, when he heard the school was locked down because of an active shooter. Late on Tuesday night, he learned the smiling photograph he held of his “full of life”, “jokester” daughter was one of her final moments.

“Thank you everyone for the prayers and help trying to find my baby. She’s been found. My little love is now flying high with the angels above,” he said.

By yesterday afternoon, all the victims had been identified.

Amerie Jo was one of 19 students, aged between seven and 10, and two teachers, killed in the once sleepy city which now claims the unenviable notoriety of the home of America’s second-deadliest school massacre.

The city lies in a rural area of Texas, 150km west of San Antonio. Robb Elementary School’s 535 students had gone to class that morning expecting a day of celebration.

With just two days left before the summer holidays, they were dressed in their finest clothes to enjoy a “Footloose and Fancy” themed day at school.

Before the lunch bell had rung, the celebrations were brought to an abrupt end as gunshots rang out.

One 10-year-old survivor said her class had been watching a film when she looked out of the window and saw a man outside with a gun.

She alerted her teacher and soon the class could hear gunfire aimed towards nearby windows. They survived by jumping out of their classroom window, one by one.

The teenage shooter, Salvador Ramos, dressed head to toe in black and wearing body armour, had run into a side door of the school at 11.30am.

Lieutenant Chris Olivarez, from the Texas Department of Public Safety, said Ramos had crashed his car nearby before making his way into the school, armed with an assault rifle.

A police officer stationed at the school tried to prevent Ramos from entering, followed by two more officers. At least two officers were shot, neither seriously. It remains unclear how Ramos was able to bypass the officers and enter the school.

“At that point they began breaking windows around the school, trying to evacuate children, teachers, anybody they could, to try to get them out of that building,” Mr Olivarez said.

Meanwhile, Ramos made his way into a classroom and began shooting at the children and teachers inside.

He had “no regard for human life, just a complete evil person”, Mr Olivarez told NBC News.

Once barricaded inside, Ramos exchanged gunfire with an elite tactical law enforcement unit, before being shot dead.

Some students were already in the school cafeteria, where staff turned off the lights and rushed to lock the doors, warning the children not to make a sound. They were eventually able to make for safety through a side exit.

Too many were not so fortunate. Among the victims were teacher Eva Mireles (44) and 10-year-old Xavier Lopez, who loved to dance and was never shy of the camera.

His mother, Felicha Martinez, told The Washington Post, her voice breaking: “He was funny, never serious. And his smile – that smile I will never forget. It would always cheer anyone up.”

Ms Mireles’s daughter said her mother had “selflessly jumped in front of her students to save their lives”.

A second teacher, Imra Garcia, was reported to have “sacrificed herself” to protect her students from the gunman. “She died a hero,” a family member said.

Jacob Silguero (35) was waiting at the civic centre for news of his 10-year-old daughter Jailah when he was asked to give a DNA sample.

“I figured after the DNA swab test, it was something bad,” he said. “About an hour later, they called to confirm that she had passed.”

The gunman had bought his cache of lethal weapons immediately after his 18th birthday, on May 16.

Earlier on Tuesday, Ramos had shot and injured his grandmother in a “domestic disturbance” before heading to the school, officials said.

Investigators were looking into reports that the grandmother, who survived, might have once worked at Robb Elementary. Ramos attended a nearby high school in the predominantly Hispanic neighbourhood of Uvalde.

Witnesses described watching the terror play out at Robb Elementary.

Derek Sotelo (26), who runs a garage nearby, was heading to lunch with a colleague when they heard gunshots. As they rounded the corner, they saw several women screaming: “He’s shooting! He’s shooting!”

The women said the gunman had driven his grey truck into a ditch outside the school. When they approached to offer assistance, he shot at them.

After Ramos entered the school, anxious parents gathered outside and the crowd grew to more than 300 people.

An hour after the shooting began, small groups of children began emerging from the building, some holding hands as they fled under police escort to a safety point.

Less than 3km away, the SSGT Willie de Leon Civic Center had become a makeshift crisis centre for families looking for their children.

As the evening stretched on, families gathered in silence outside waiting for news of their loved ones.

Parents who had gathered there were shown photographs of the rucksack each child was found with to see whether they could recognise them.

They were then asked to give DNA samples to help identify their children and instructed to wait.

One father fought back tears as his worst fears were confirmed, his cousins embracing him.

A few yards away, a woman said she would not stop praying for her 10-year-old granddaughter as they waited for the results of their own DNA swabs.

Some families sat in silence or sobbed quietly as a group of children sat on the floor playing with teddy bears.

The massacre is just the latest in a grim tally of mass shootings in America – there have been 248 so far this year.

Tuesday’s shooting was the worst at a primary school since the 2012 Sandy Hook shooting in Connecticut, in which 20 children and six staff were killed.

“Why are we willing to live with this carnage?” an angry Joe Biden asked in a national address. “Why do we keep letting this happen?” (© Telegraph Media Group Ltd 2022) 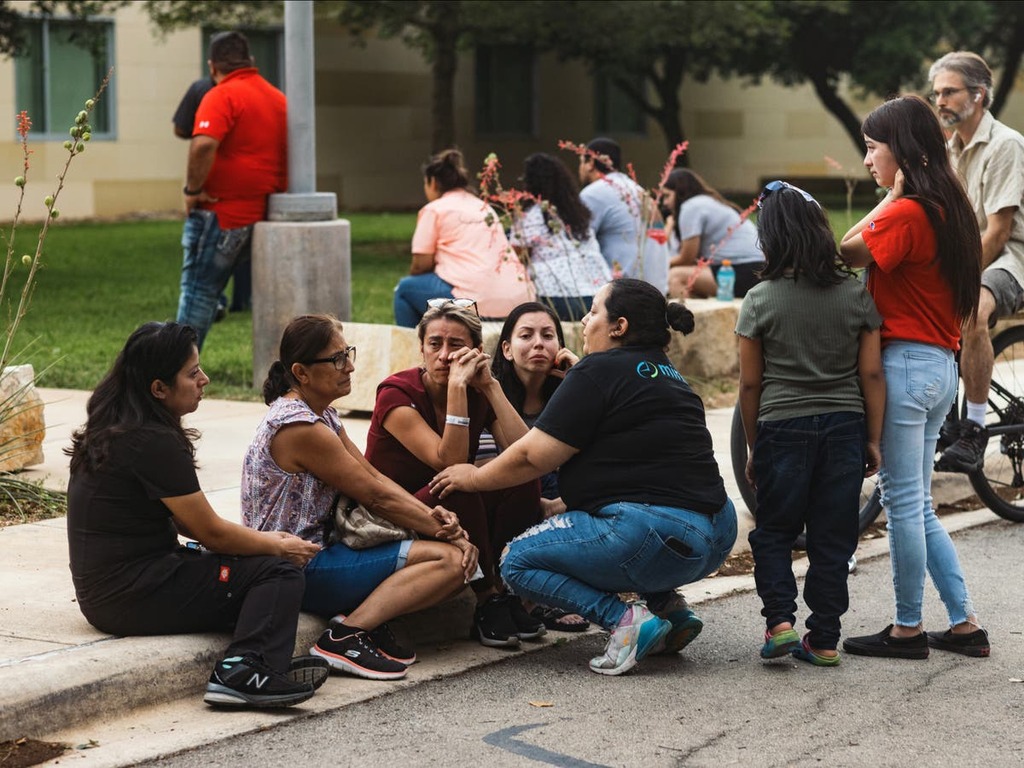 Texas school shooting: All 21 victims were killed in one classroom after gunman barricaded himself in
At least 19 children between the ages of 5 and 11 and two adults were killed

The Independent UK
One subscription that gives you access to news from hundreds of sites
'Nightmare' as gunman murders 19 children, two teachers in Texas

AFP
Texas school shooting: All 19 children, 2 adults killed in single classroom
UVALDE, Texas — A gunman who killed 19 children and two teachers at a Texas elementary school in one of…