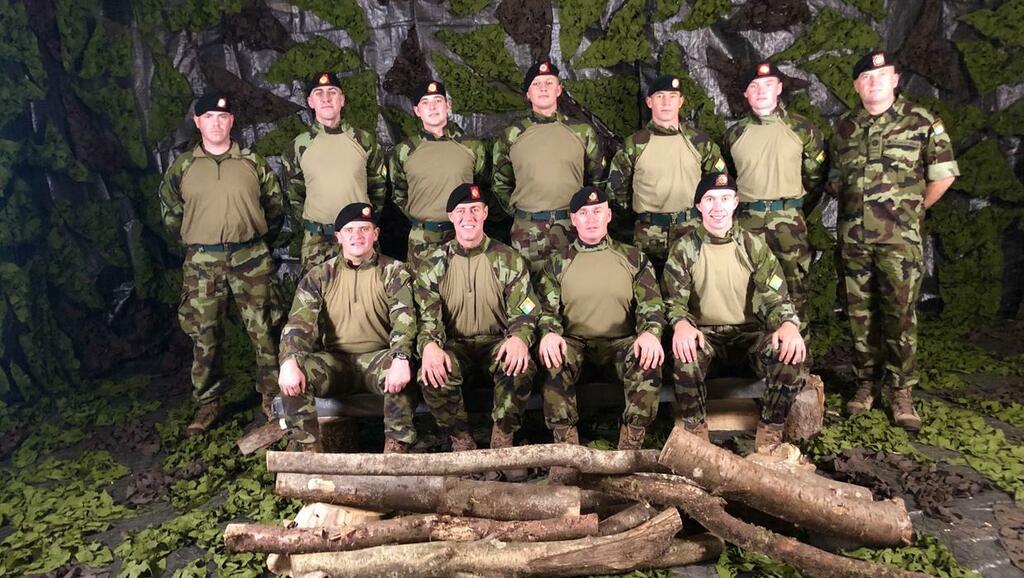 The eight person team participated in the 48 hour exercise which saw them walk over a course of 70km+ taking in some the hardest terrain Wales had to offer, while carrying weapons and equipment weighing between 45-50 kgs.

Private Gerard Rogers described the exercise as the “most physically demanding 48 hours of my life, but worth every minute”

The team were tested in a number of military skills throughout the 48 hours including medical evacuation, simulated mine strikes, Chemical Biological Radiological & Nuclear (CBRN) scenarios, improvised river crossings and close target reconnaissance (CTR) tasks. The team were the first international team from 88 patrols to achieve the gold medal.

Team manager, Sergeant Alan Ferguson outlined the commitment required to achieve their Gold Medal. “As Team Manager I had a huge responsibility to ensure that the guys had a comprehensive and realistic training programme in the run up to the actual Patrol. We are all close friends and I didn’t want to let them down in this regard. I spent every week since late July including weekends coming up with training exercises, scenarios, tactical/situation briefings and correcting previous patrol reports. Two of the lads had competed in this event before in different years and both came away with Silver. This year they wanted to put things right, they wanted nothing but gold and that hunger for success, drive, leadership, teamwork and training paid off. I was honoured to have been asked to be Team Manager and I’m immensely proud of them all.

To see them at the front of the ceremonial room receiving their gold medals with all the other UK and International teams looking on is a memory I’ll never forget.”

Sergeant Brian Loughran, the team’s second in command, described the exervices, as the “Toughest thing I’ve ever had to endure in my 19 years service, but worth every bruise, blister and ache to achieve such an award.....so proud of my boys”

The Cambrian Patrol is an annual international military exercise that involves its participating units covering an arduous course in less than 48 hours while performing military tasks and patrols throughout the rugged Cambrian Mountains and testing terrain of Mid-Wales.