France and Germany have seized two superyachts owned by Russian oligarchs, hitting Russia's super-rich under sanctions imposed on Moscow over its invasion of Ukraine.

At least five other superyachts owned by Russian billionaires are anchored or cruising in the Maldives, an Indian Ocean island nation, ship tracking data showed.

The yachts arrived in the Maldives after the West imposed sanctions on Russia.

Washington, the European Union and others have said they will target oligarchs who have amassed fortunes and political influence under Russian President Vladmir Putin.

"Thanks to the French customs officers who are enforcing the European Union's sanctions against those close to the Russian government," Finance Minister Bruno Le Maire said on Thursday after French customs seized the 88-metre "Amore Vero" (True Love).

The yacht had been about to flee, he said.

It was impounded in the French Riviera port of La Ciotat and belongs to a company whose main shareholder is Rosneft chief Igor Sechin, a close ally of Putin, the finance ministry said.

In Germany, a nearly $600 million luxury yacht owned by Russian billionaire Alisher Usmanov was seized in the northern port of Hamburg, Forbes reported.

And in another sign of Russian oligarchs feeling the sanctions' heat, billionaire Roman Abramovich said yesterday he would sell the Chelsea Football Club and promised to donate money from the sale to help victims of the war in Ukraine.

The United States is preparing a sanctions package targeting more Russian oligarchs as well as their companies and assets, two sources said on Wednesday, after US President Joe Biden said the United States would work to seize the yachts, luxury apartments and private jets of wealthy Russians.

The EU, the United States, Canada and Britain are pooling efforts to examine how oligarchs could find ways to bypass the sanctions and also nail down the role of trust companies in holding assets, an EU official said on Thursday.

This task force will aim to close loopholes as they become apparent, the official said.

The impact of the sanctions was being widely felt.

"There is a significant chilling effect on any new business with Russia," said Matt Townsend, a sanctions partner at law firm Allen & Overy.

"People are concerned about credit risk exposure but are also worried about what's coming next. Everyone's eyes are on the next wave of significant sanctions."

The Amore Vero seized in La Ciotat had arrived there on January 3 and was due to stay until April 1 for repairs, the French finance ministry said.

On Wednesday, customs officers noted that the yacht was "taking steps to sail off urgently, without the repair works being over," the statement said.

As it was subject to the new sanctions, the officers decided to seize it.

Rosneft, a Russian oil giant, did not respond to a request for comment over the seizure.

"The individual you name is not connected with either Kazimo nor the yacht," a representative for Imperial Yachts told Reuters when asked about Sechin.

The French finance ministry did not immediately return a request for comment.

Spanish group MB92, which owns the Ciotat shipyard, said the company was cooperating with the French authorities.

In Germany, the 156-metre yacht Dilbar had been undergoing a refit in the shipyards of Blohm + Voss, Forbes said.

The German government had frozen the asset and employees working on the ship did not appear for work on Wednesday, Forbes said.

A representative of Usmanov said he had no confirmation of the yacht's reported seizure.

A spokesperson for Blohm + Voss declined to comment on the Dilbar, saying only that all orders and projects of its owners, the Luerssen Group, and subsidiaries were treated in accordance with the legal situation.

Meanwhile, at least five superyachts owned by Russian billionaires appeared to have found temporary haven in the Maldives, a luxury holiday destination.

The superyacht Clio, owned by Oleg Deripaska, the founder of aluminium giant Rusal who was sanctioned by the United States in 2018, was anchored off the capital Male on Wednesday, according to shipping database MarineTraffic.

The Titan, owned by Alexander Abramov, a co-founder of Russian steel producer Evraz, arrived on Monday.

Most of the vessels were last seen anchored in Middle Eastern ports.

A spokesperson for the Maldives government did not respond to a request for comment. 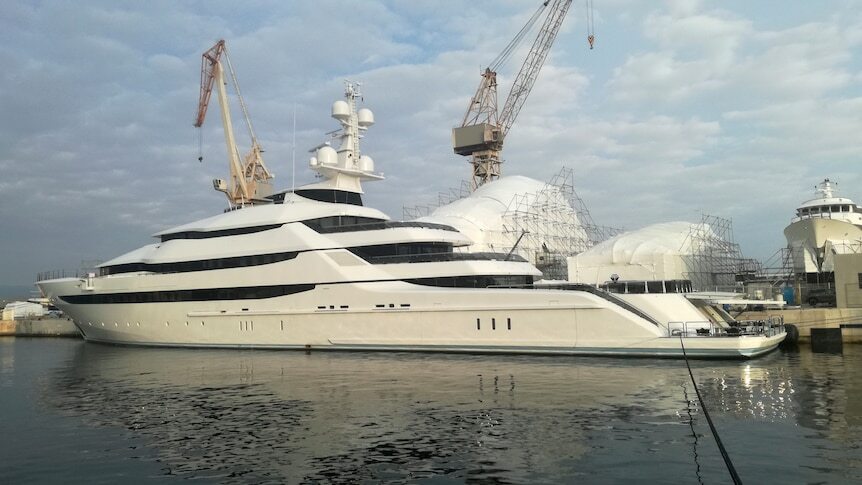 Russian oligarchs' ships seized amid sanctions over Ukraine invasion
With Western nations seizing the assets of Russian oligarchs following the invasion of Ukraine, at least five superyachts owned by…

ABC News
One subscription that gives you access to news from hundreds of sites
Yacht seized as U.S. ramps up oligarch sanctions so Putin 'feels the squeeze'

The French government on Thursday said it had seized a superyacht owned by a company linked to Igor Sechin, chief…

A luxury yacht linked to Russian billionaire Alisher Usmanov, who faces EU sanctions over Russia's invasion of Ukraine, is sitting…