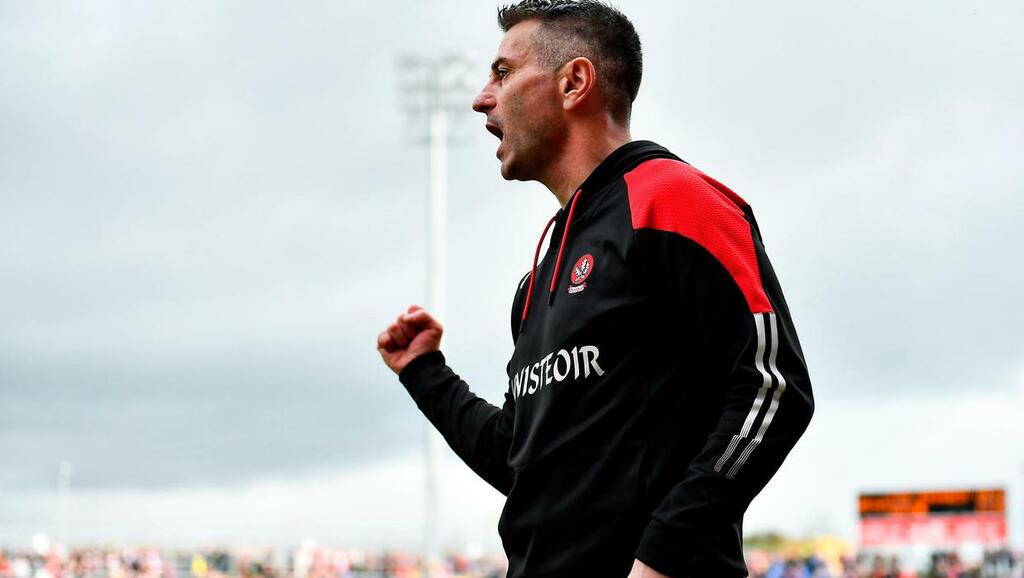 Your guide to the weekend GAA action
TODAY

DERRY have qualified for their first Ulster final since 2011 after causing a second seismic upset.

Irish Mirror
One subscription that gives you access to news from hundreds of sites
Derry are on the rise, but Farneymen are the favourites says Conleith Gilligan

We are almost a month into the championship and results have gone along expected lines. The exception was Derry’s defeat…

Royals are not ready yet to turn the blue tide

And if you are old enough and have not lost your marbles you can remember when Meath used to actually beat Dublin on a regular basis.

If you are able to go back that far you can also remember when young people were not permanently attached to a mobile phone and Casablanca was probably one of your favourite films.

Like Cork against Kerry, this fixture is surely becoming tedious for most of the participants.

From Dublin’s point of view, Meath are not seen as a serious team, but the last decade has shown that they treat all opposition in Leinster with respect and humility. That makes it much easier to batter them into submission. Dublin don’t do overconfidence.

On the Meath side, the build-up to these games invariably leads to rehashing some of the great matches of the past, and of course some of the great wins. The players must be fed up with these comparisons — at least they should be.

There is a very simple way of despatching all of us ancient soldiers to the dim and distant past — that is by beating Dublin. We all had to build our own tradition by doing that.

Meath should take at least some hope from last year when coming from 11 down at half-time and getting the margin down to three before Dublin responded with three late points to win (2-16 to 1-13).

At the time it seemed as if Meath had turned a corner, but the pattern of Dublin fade outs in the second half continued against Kildare in the Leinster final and the bomb finally went off against Mayo in the All-Ireland semi-final.

At that time, and then in the league, it appeared as if the Dublin empire was crumbling. Many of the leaders looked mentally tired, going through the motions. Yet the win over Wexford a fortnight ago proved conclusively that they have not gone away. You might say this was a performance against a Division 4 team so it is nothing to go on.

However, Wexford exposed the first cracks last year, and this time it was a ruthless demolition job. Brian Fenton, Ciarán Kilkenny, Con O’Callaghan, Dean Rock, Michael Fitzsimons, Brian Howard — they all showed up. Dublin have a proven panel of players, all dripping in gold, and they could afford to have James McCarthy and Niall Scully on the bench. Their ambitions stretch beyond today.

Meath had a poor start to the league but there were signs of improvement as it wore on, particularly in terms of getting men and the ball forward quicker.

Cork were easily beaten in Navan, but the visitors that day were poor beyond description. Against Derry there was even more hope. Maybe it was a dead rubber and played out like a challenge match, and Derry won, but it was a match that could have gone either way.

The form of Derry before and since has shown they are a fairly good team with potential to get better. Today will tell a lot more about them.

This is the longest stretch since the 1920s for Meath to be absent from an All-Ireland final. Before 1939 and now after 2001. That makes a lot of people wonder if we will ever see it again. The heroes of Meath football now are women. It is a big ask today to light a great fire.

Plato, the Greek philosopher, said that “you can discover more about a person in an hour of play than in a year of conversation.” I’m not sure if Plato was ever at a game between Meath and Dublin in Croke Park, but the implication is clear.

You learn a lot about courage and skill and loyalty and leadership and manliness in the great coliseum by the Canal. We live in hope.

However, the only logical conclusion is that Dublin will win again and consign Meath to what appears like a damned eternity of second class citizenship.

Perhaps the biggest game of the day is in Ulster, the semi-final meeting of Monaghan and Derry in the Athletic Grounds. Ulster is the gift that keeps on giving. The championship throws up great struggles if not great games and today will be no different.

Very few outside of Derry saw the destruction of Tyrone coming. Maybe that includes many inside the team. Where Derry were strong and disciplined, Tyrone were weak and petulant — not a good mix with which to defend an All-Ireland.

Derry dominated physically, mentally and through hard work and skill. People saw players like Gareth McKinless, Conor Glass, Shane McGuigan and Conor Doherty and realised these are proper footballers. And the gel that has been missing for a decade returned.

Monaghan are a different proposition altogether. They know the time of day and while Tyrone lacked hunger it is an essential part of what makes Monaghan a serious team.

They have a hard edge and an appetite for battle. Tough games bring out the best in them. Yet there is another change from the recent past. Monaghan are scoring more.

For many years their success was built around keeping the opposition score down with the Wylie brothers the anchors of their defence.

The other brothers, Darren and Kieran Hughes, have been rejuvenated at midfield, but something has gone haywire up front.

Normally a score of 14 or 15 points would be around their limit. In the league against Dublin they scored 3-13, in the championship against Down it was 0-23.

You’d expect that Conor McManus would need to shoot the lights out to get near those scores, but it has been Jack McCarron, who got 2-6 against Dublin and 0-7 against Down.

McCarron was looked on as very skilful but a bit too slow for championship football. Now it appears Monaghan have found a way of getting the ball to him in space.

He doesn’t miss often. He also has a big man beside him, Gary Mohan, who can play a bit and as soon as he gets a haircut he could be even better.

Those two are hard to handle so Conor McManus can be just one of the team now rather than the “hewer of wood and drawer of water” for everyone else.

This will be a game of cat and mouse for a long time and the first half will probably feature plenty of lateral play. Derry will start off very cagey and Monaghan could make life easier for themselves by risking more on all-out attack early on. If they do that Derry would be forced out of their defensive shell. I expect Monaghan to seize the moment.

The other match in Leinster starts off proceedings in Croke Park. There have been some grumblings that this match should be in a smaller venue where there would be more atmosphere and there is no doubt that Croke Park will be fairly empty when the ball is thrown in at 2.15.

However, if you asked the players on both sides they would probably say they would prefer playing in the big field, even if there is no one there.

Westmeath struggled through the league and reversed the earlier defeat by beating Longford in the first round of the championship. The score of 3-13 was pretty decent but Kildare managed 2-22 against Louth.

Looking at all the teams in Leinster it is fairly obvious that Kildare have a lot of very good footballers and were a small bit unfortunate to be relegated.

That campaign saw then beat Dublin, draw with Kerry and beat Monaghan. That sort of form is a long way above what Westmeath have been experiencing recently. It looks like a repeat of last year’s Leinster final, Kildare v Dublin.

Your guide to the weekend GAA action
TODAY

DERRY have qualified for their first Ulster final since 2011 after causing a second seismic upset.

Irish Mirror
One subscription that gives you access to news from hundreds of sites
Derry are on the rise, but Farneymen are the favourites says Conleith Gilligan

We are almost a month into the championship and results have gone along expected lines. The exception was Derry’s defeat…