By By Nicole Winfield and Justin Spike, Associated Press 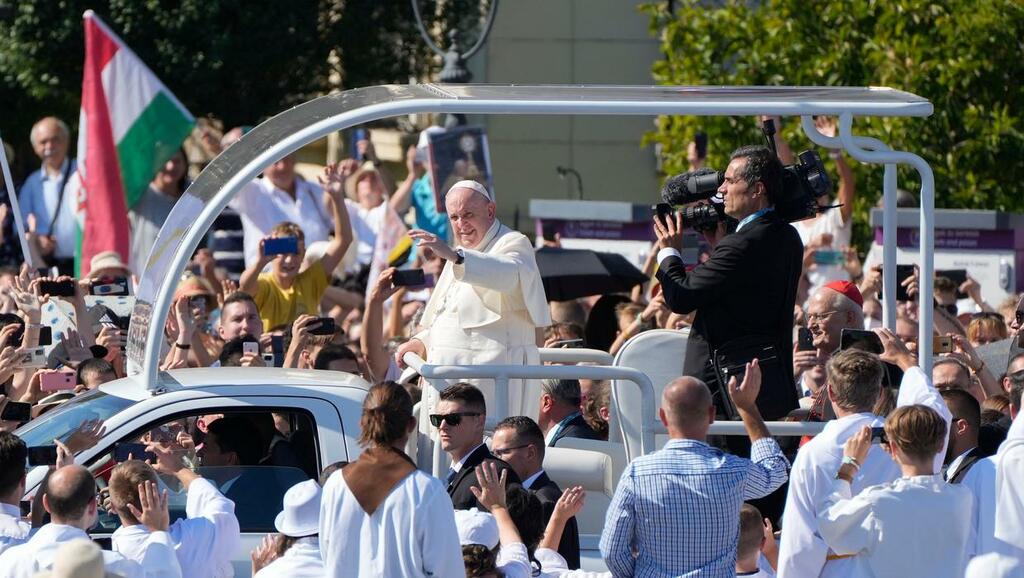 Pope Francis arrived in Hungary on his first foreign trip since undergoing intestinal surgery in July, kicking off a four-day pilgrimage with an awkward meeting with prime minister Viktor Orban, who represents the type of populist, nationalist leader Francis frequently criticises.

Mr Orban, whose anti-migration policies clash with Francis’ call for refugee welcome, greeted the Argentine pope at the Museum of Fine Arts and the two went into a private meeting attended also by the Hungarian president and Vatican officials.

Hungary’s hardline stand on migration apparently did not come up during Sunday’s chat.

Video footage of the encounter showed Francis shaking hands with President Janos Ader, Mr Orban and deputy prime minister Zsolt Semjen and smiling, and then the Hungarian and Vatican sides sitting apart in a cavernous room of the museum.

The Vatican said the meeting was held in a “cordial atmosphere” and lasted longer than expected, 40 minutes.

Francis is only spending seven hours in Budapest before moving Sunday afternoon onto a four-day tour of neighbouring Slovakia.

The lopsided itinerary suggested that Francis wanted to avoid giving Orban the political boost that comes with hosting a pope for a proper state visit ahead of elections next spring.

Vatican and Hungarian officials have insisted Francis is not snubbing Hungary, noting that the Hungarian church and state only invited him to close out an international conference on the Eucharist on Sunday.

Mr Orban has frequently depicted his government as a defender of Christian civilisation in Europe and a bulwark against migration from Muslim-majority countries.

Francis has expressed solidarity with migrants and refugees and criticised what he called “national populism” advanced by governments like Hungary’s.

He has urged governments to welcome and integrate as many migrants as they can.

Organisers expected as many as 75,000 people at the congress’ concluding Mass in Heroes’ Square, which went ahead with few coronavirus restrictions even as Hungary, like the rest of Europe, is battling infections fuelled by the highly contagious Delta variant.

Few in the crowd wore masks and no tests or vaccination certificates were required to gain entrance.

Matyas Mezosi, a Hungarian Catholic who got to the mass site early, was jubilant that the pope had come at all so soon after his surgery; The 84-year-old pope had 33 centimetres (13 inches) of his colon removed in early July.

“It’s great to see him recovered from that surgery,” Mr Mezosi said.

“Him being here in Hungary today means that he sacrifices himself to be with us, and that he feels good now.”

During the flight from Rome, Francis indeed seemed in good form: He stayed so long greeting journalists at the back of the plane that an aide had to tell him to get back to his seat because it was time to land.

Francis said he was happy to be resuming foreign trips again after the coronavirus lull and then his own post-operative recovery.

“If I’m alive it’s because bad weeds never die,” he quipped about his health, quoting an Argentine dictum.

But later in the morning he apologised to his audience of Christian and Jewish leaders by delivering his speech sitting down, joking that “I’m not 15 anymore.”

In his remarks, Francis warned against a resurgence of anti-Semitism in Europe, saying it is a “fuse which must not be allowed to burn.”

The Argentine pope called for Christians, Jews and people of other faiths to commit themselves to promoting greater fraternity “so that outbursts of hatred that would destroy that fraternity will never prevail”.

Hungary’s large Jewish population was devastated during the closing months of the Second World War, with more than 550,000 Jewish deaths.

The vast majority were deported within a two-month period in 1944 with the assistance of Hungary’s fascist Arrow Cross Party, and most were sent to the Auschwitz concentration camp in occupied Poland.

More Hungarians died in Auschwitz than any other nationality, and more Hungarian Jews perished in the Holocaust than from any country other than Poland and the Soviet Union.

Hungary’s government under Mr Orban has been accused of trafficking in veiled anti-Semitic stereotypes, largely aimed at Hungarian-born US financier and philanthropist George Soros, whom the government frequently accuses of meddling in the country’s internal affairs.

A tiny fraction of the population is Jewish.

Still, religious commitment in Hungary lags behind many of its neighbours.

According to a 2018 survey by the Pew Research Centre, only 14% of Hungarians said religion was an important part of their lives, and 17% said they attend religious services at least monthly.

Despite that, registered churches have been major beneficiaries of state support under Mr Orban since he returned to power in 2010.

Additionally, around 3,000 places of worship have been built or restored using public funds since 2010, part of an effort by Mr Orban’s government to advance what he calls “Christian democracy”, an alternative to liberal governance of which he is a frequent critic.