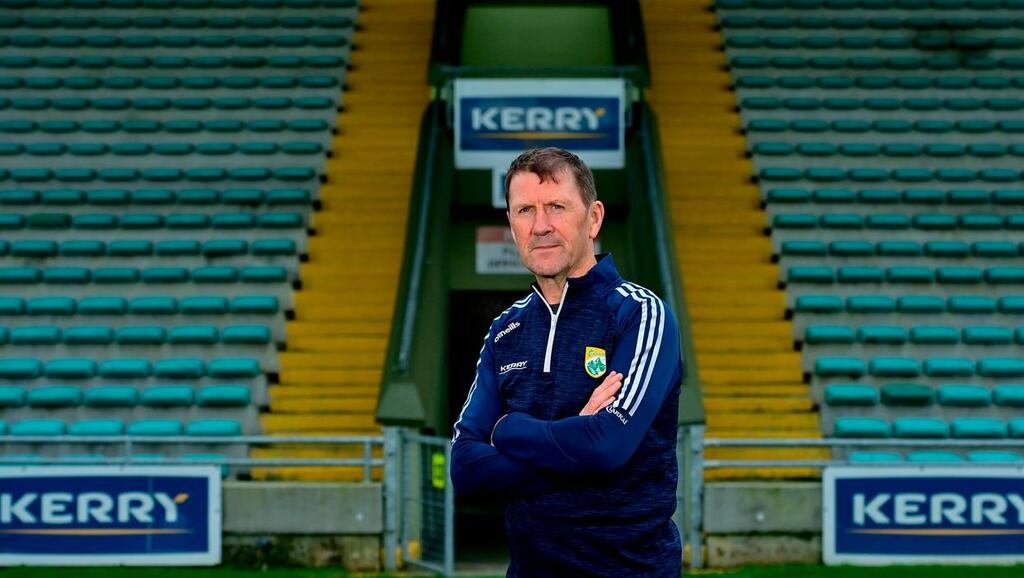 The self-styled outsider folds his arms and stretches his legs out long under a table in Austin Stack Park, the body language that of a man ready for any fires about to be set.

Faced by microphones, most Kerry managers feel compelled to become curators of platitude and cliché, but he knows this is different. Jack O’Connor has heard the noise.

So his third stint as Kerry manager officially begins with a question and answer session in Tralee that, for a time, is all about awkward backward glances.

In Kildare, his decision not to complete the third year of his term has been broadly depicted as an act of opportunism, predicated on the changed circumstance of his native county. The bigots and fools of social media have been having a field day, so much so that Kerry chairman Tim Murphy felt compelled to describe questioning of their selection process last Monday as “the lowest of the low”.

Given a previous Kildare statement declaring work with the senior footballers being “at an advanced stage of planning for 2022”, O’Connor’s resignation on September 6 became a kind of incendiary.

“There’s a bit of a misconception there,” he says firmly now. “This thing that I left Kildare because I was asked to manage Kerry or that it was a done deal is absolute and total nonsense.

“The situation in Kildare was I more or less had my mind made up when we were beaten in the Leinster final.

“In fact, I was quite emotional in the dressing-room because I’d a fair idea it was my last time meeting that bunch of players or addressing them.

“I had a great time in Kildare. The people couldn’t have been more welcoming, but I was finding the almost nine-hour round journey was taking a huge toll.

“And even people close to me would have remarked around that time that I’d lost a lot of weight, that I couldn’t afford to lose.

O’Connor leaves Kildare a Division 1 team, yet drew heat before departing for his depiction in a podcast of Kerry as Gaelic football’s Manchester United.

No matter, for a man who won immediate All-Irelands in his previous two stints as Kerry senior boss and someone who guided the county’s minors to glory in 2014 and ’15 too, his credentials to replace Peter Keane are scarcely up for argument.

He was, too, always likely to be vulnerable to the visceral pull of home.

“In many ways, it’s a dream come true for me to get back working with the lads I worked with in 2014 and 2015,” said O’Connor, confirming that Tyrone’s Paddy Tally will join Diarmuid Murphy and Mike Quirke in his backroom team.

You get the impression that O’Connor returns a calmer, more weathered soul.

He wrote a book in ’07, the pages of which read stark with the hard edge of perceived isolation, with his sense of exclusion.

Not one member of the 1970s team contacted him on his first appointment in late ’03 as replacement for Páidí Ó Sé, O’Connor interpreting their silence as a hostile clannishness. He wasn’t part of their silken world, had no access to the elegant light of their history.

And, to Jack, that made him unwelcome.

That’s where his sense of being an outsider found traction, in the idea that the gods of the county were almost willing him to fail.

Seventeen years on, he considers himself wiser, less trenchant.

“I would openly admit that when I went in in 2004, I felt under ferocious pressure because of the man I was replacing,” he says now. “I was replacing a legend, who’d won eight All-Irelands on the field and two more on the sideline. And I’d been involved with him for those two All-Irelands in ’97 and 2000.

“For different reasons, I felt under a lot of pressure to win that year.

“I think that I’m better able keep things in perspective now. I don’t take criticism as personally as I used to that time. I’m not saying that I like criticism, but I can deal better with it. I’d be a bit more thick-skinned than I used to be. And I now know the areas where you need to direct your energy.”

His first stint as Kerry boss drew immediate success at a time when Ulster teams were becoming brazen.

For three years out of four (’02-’05), Kerry’s hopes would be guillotined by steel-boned Northerners infused with what Jack himself perceived at the time as a vaulting self-regard. He spoke of “an arrogance” in the new challengers “which rubs Kerry people up the wrong way”.

The idea of Kerry being spooked by Northern champions, of them wintering in the red glow of a Sacred Heart lamp for fear of a famine looming clearly needled him.

“They build up a mythology about themselves,” he said in ‘Keys to the Kingdom’. “That doesn’t sit well in Kerry, where a man with four All-Ireland medals would quietly defer to another man who has five.”

Now his third stint begins, as the previous two did, with Tyrone as All-Ireland champions.

And if there was a time in Kerry when losing to Ulster teams represented some social embarrassment, the prejudices of the past have been ground to dust now. O’Connor’s previous Kerry teams found the Tyrone template hard to penetrate and he reckons the new champions won’t be abdicating gently now.

“Tyrone, in my head, could be even better next year,” he says now. “Because if you think about it, they had disruptions this year with Covid and all that. And the confidence it will give them having won the All-Ireland, they could be better again next year.

“But look I wouldn’t be too sure now that Dublin are gone anywhere. They could regroup next year. They still have a core of very good players, the Brian Fentons, the Ciarán Kilkennys, the Con O’Callaghans, these fellas, they’re going nowhere.

“They could regroup and come very strong next year.”

From there, he does what a Kerry manager must, name-checking just about every team with a functioning pulse. And soon he is on his feet, gathering his coat.

“Thanks lads,” he smiles. “I hope we’ll still be as harmonious in our dealings this time next year!”