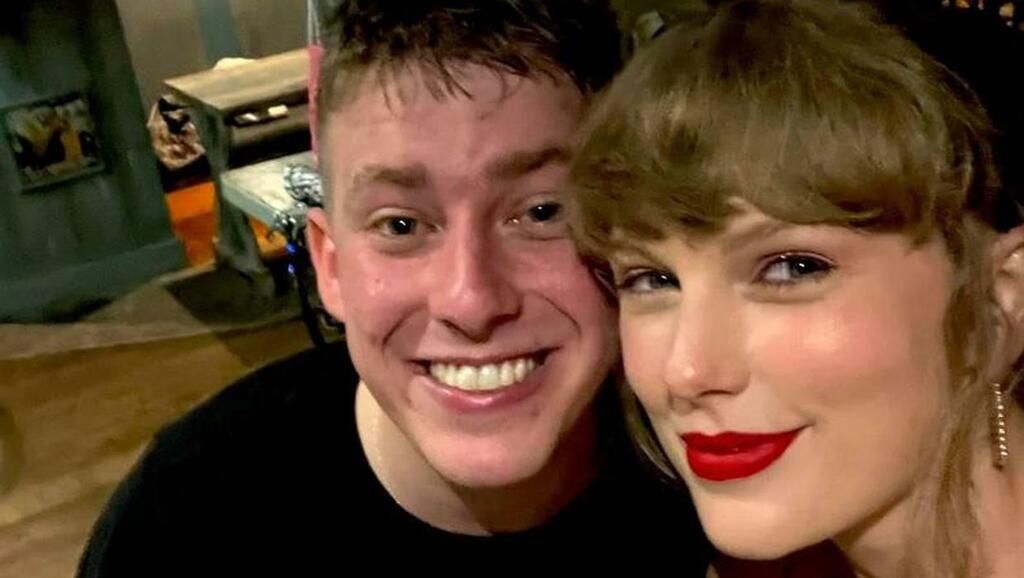 A young Co Antrim singer/songwriter who performed in front of an impressed Taylor Swift in Belfast has described the experience as “better than winning The X Factor or The Voice”.

Tiernan Heffron (22), who comes from outside Randalstown, was gigging at the Tipsy Bird bar in the city centre when he was told the pop sensation had just arrived with her actor boyfriend Joe Alwyn.

The pair were accompanied by dozens of cast and crew from the TV adaptation of Conversations with Friends, at the glamorous wrap party.

Alwyn is one of the stars of the new drama, which has been filming in Northern Ireland for several months.

Tiernan, who has a regular Friday night slot at the pub, was stunned to see the multi-Grammy award-winner take to the dancefloor to Shake It Off during his performance.

But there was a bigger shock to come when Swift approached him to ask for a selfie and how she could follow his music. The American superstar then gave the musician an undisclosed tip to thank him for entertaining her.

Speaking to the Belfast Telegraph, Tiernan, who writes his own material as well as doing covers, said his feet haven’t touched the ground since meeting Swift and that it had been the “best moment” of his life.

“When I walked into the Tipsy Bird I thought it was going to be a quiet night but then I heard that the cast and crew from Conversations with Friends were coming in,” he said.

“I was about 20 minutes into my set when someone told me that Taylor Swift was in the bar. I just laughed and said: ‘Come on, you’re joking’, but looked up and there she was.

“I kept on singing but the backs of my knees were shaking and my heart was beating. I was nervous obviously - it was Taylor Swift! But I was so excited too.

“I started singing I’ll Tell My Ma and next thing, she was up dancing and singing along. Then she came over to talk to me, with a big smile on her face and gave me a hug.

“She asked me for a selfie. I mean, she asked me, not the other way around. I couldn’t believe it. It was the best moment of my life; like winning The X Factor or The Voice, only better.”

Tiernan performed a number of covers including Marvin Gaye’s Let’s Get It On and Keith Urban’s track Somebody Like You. To show her appreciation, Swift gave the singer a “nice” tip and asked how she could follow his music. She also introduced him to her boyfriend and they chatted about her friendship with Ed Sheeran, another singer whose songs Tiernan covers in his set.

“I had my first ever business cards printed just a fortnight ago and had ordered 2,000 because it worked out cheaper that way,” Tiernan explained.

“I’d been giving them away outside the Kodaline gig in Belfast recently. To be honest, I’d just been trying to get rid of them all.

“Next thing, I’m standing there, giving my business card to Taylor Swift. She said she’d been to a lot of gigs in her time and that she really liked my singing.

“Then she said: ‘This is you, putting in your 10,000 hours, you’ll do great’ and told me she was sending me positive vibes.”

After his slot was over, a delighted Tiernan drove home, blaring Swift’s song Love Story in the car. He stopped off at his best friend Aidan’s house at 3am, to share what had just happened. Then he drove home to his parents’ house, where he was unable to sleep due to the excitement.

“Earlier in the night I’d sent the selfie of me and Taylor to my mum and when my sister saw it, she said: ‘That girl looks just like Taylor Swift’,” said Tiernan, who works as a classroom assistant in a special needs school in Ballymena.

“But they never thought for one moment that it was her.

“They were all sleeping when I got home, so I couldn’t tell them what happened until the following morning.

“The thing is, I'm a huge Taylor Swift fan. I don’t know what’s going to happen next, if I hear from her or not. But whatever happens, I am ready. I’m going to ride this wave and enjoy every moment.