By By David Keyton and Frank Jordans, Associated Press 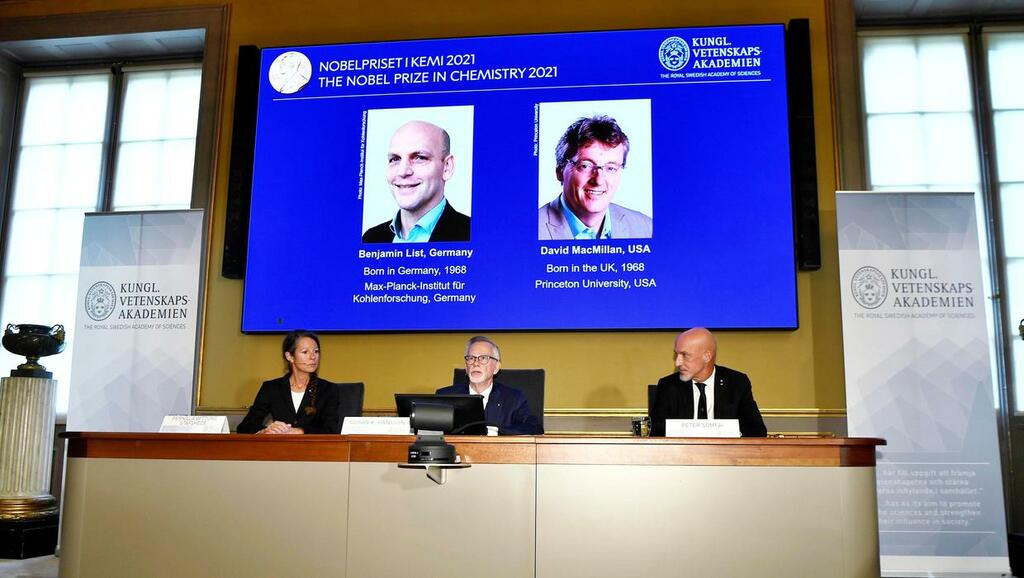 Two scientists have won the Nobel Prize for chemistry for finding an “ingenious” and environmentally cleaner way to build molecules that can be used to make everything from medicines to food flavourings.

The work of Benjamin List of Germany and Scotland-born David WC MacMillan has allowed scientists to produce those molecules more cheaply, efficiently, safely, and with significantly less environmental impact.

Making molecules — which requires linking individual atoms together in specific arrangement — is a difficult and slow task. Until the beginning of the millennium, chemists had only two methods — or catalysts — to speed up the process.

That all changed in 2000, when Professor List, of the Max Planck Institute in Germany, and Professor MacMillan, of Princeton University in the US, independently reported that small organic molecules could be used to do the same job as big enzymes and metal catalysts.

Johan Aqvist, chair of the Nobel panel, called the new method as “simple as it is ingenious”.

“The fact is that many people have wondered why we didn’t think of it earlier,” he added.

Speaking after hearing the news, Prof MacMillan told The Associated Press that he was “stunned, shocked, happy, very proud”.

He said he did not expect to get a call from the Nobel committee.

“I grew up in Scotland, a working-class kid. My dad’s a steelworker. My mum was a home help. I was lucky enough to get a chance to come to America to do my PhD,” he said.

His inspiration came when thinking about the dirty process of making chemicals — one that requires precautions he likened to those taken at nuclear power plants.

If he could devise a way of “making medicines faster by a completely different way” that did not require vats of metal catalysts, the process would be safer for both workers and the planet.

“We recognised that not only would it make it faster, cheaper, it would also make it better — better for the environment, better for the world,” he said.

Before the laureates’ work, “the standard catalysts frequently used were metals, which frequently have environmental downsides”, Mr Cheng said.

BREAKING NEWS:
The 2021 #NobelPrize in Chemistry has been awarded to Benjamin List and David W.C. MacMillan “for the development of asymmetric organocatalysis.” pic.twitter.com/SzTJ2Chtge

“They accumulate, they leach, they may be hazardous.”

The catalysts that Prof MacMillan and Prof List pioneered “are organic so they will degrade faster, and they are also cheaper”, he said.

Peter Somfai, another member of the committee, stressed the importance of the discovery for the world economy.

“It has been estimated that catalysis is responsible for about 35% of the world’s GDP, which is a pretty impressive figure,” he said.

“If we have a more environmentally friendly alternative, it’s expected that that will make a difference.”

Speaking after the announcement, Prof List said the award was a “huge surprise”.

“You really made my day today,” the 53-year-old said while on holiday in Amsterdam.

Prof List said he did not initially know that Prof MacMillan was working on the same subject and figured his hunch might just be a “stupid idea” — until it worked.

“When I saw it worked, I did feel that this could be something big,” he said.

Since their discovery, the tool has been further refined, making it many times more efficient, said Prof List, adding that the “real revolution” was only just beginning.

Prof List said the award would allow him even greater freedom in his future work.

“I hope I live up to this, to this recognition and continue discovering amazing things,” he said.

It is common for several scientists who work in related fields to share the prize.

Last year, the chemistry prize went to Emmanuelle Charpentier of France and Jennifer A Doudna of the United States for developing a gene-editing tool that has revolutionised science by providing a way to alter DNA.

Watch this video with our new #NobelPrize laureate David MacMillan to learn more about his work. https://t.co/gYzi1Lplub

The prestigious award comes with a gold medal and 10 million Swedish kronor (£800,000).

The prize money comes from a bequest left by the creator of the prize, Swedish inventor Alfred Nobel, who died in 1895.

The Nobel Prize in physics was awarded on Tuesday to three scientists whose work found order in seeming disorder, helping to explain and predict complex forces of nature, including expanding our understanding of climate change.

Over the coming days prizes will also be awarded for outstanding work in the fields of literature, peace and economics.