Nintendo Switch Sports review: Wonder of waggling not quite as novel as it once was

More than 80 million homes at some point owned a copy of Wii Sports, the motion-controlled collection that transfixed non-gamers for a time in 2007.

That title came to define the plucky little Wii console as a friendly machine on which playing games was simple and intuitive as waggling a controller. Much less is at stake for Nintendo Switch Sports, which is a more elaborate re-run for a console that has already become a wild success.

Yet while NSS is no clone, it is essentially the same set-up in which the Joy-Con motion controllers enable players of all abilities to participate in six sports: tennis, badminton, football, sword-fighting, bowling and volleyball. Naturally, the Joy-Cons are more accurate in their tracking than the original Wiimote. But the nuance of your control is not always obvious, not least because some of the sports don’t have full tutorials, which is very unlike Nintendo.

Just six sports might also seem a little miserly given that the 2013 sequel Wii Sports Resort featured 12 (the original Wii Sports had just five). Nintendo promises to add golf in a free update to NSS later this year but at least acknowledges the lower value proposition with a mid-range price tag.

Nonetheless, NSS provides a substantial core of multiplayer fun that should grab non-gamers’ attention all over again. In single-player mode against the CPU, it has a fleeting charm that lacks enough diversity of challenge. But with a bunch of other humans it escalates into a perfect party game full of friendly bickering, shouting and competitiveness.

Those humans no longer need be in the same room either, with online multiplayer now an option, albeit through Nintendo’s clunky matchmaking system and using voice chat awkwardly via smartphone app.

The games themselves are a mixed bunch. Tennis reminds me closely of the Wii Sports original, though confusingly you control two doubles players at once. Badminton adds more subtlety but is poorly explained to newcomers. Bowling enables up to 16 players to compete online in simultaneous play but again resembles the 2007 version. Sword-fighting demands you read your opponent’s stance to counter their angle and makes for a decent challenge. Volleyball offers perhaps the most complexity, ensuring you master the spike, block and serve, and thus offers the most longevity.

However, football proved to be my favourite because it doesn’t behave like soccer much, instead riffing on Rocket League by using a giant ball. With up to eight players online, it gets delightfully chaotic and yet requires a lot of skill and team coordination. If you own the leg strap from Ring Fit Adventures, it can mimic the act of kicking in penalty shoot-outs, with an upcoming patch allowing its use in full games.

Some sports entail more exertion than others, with volleyball, football and sword-fighting bringing out a sweat far more easily than the others.

NSS has already hit the top of the charts but won’t dominate the zeitgeist the way Wii Sports did 15 years ago. That’s partly down to the changed gaming landscape but also the lack of novelty factor in NSS. We’ve seen it before and even though it’s never been done so well, the overall package seems a Wii bit thin. 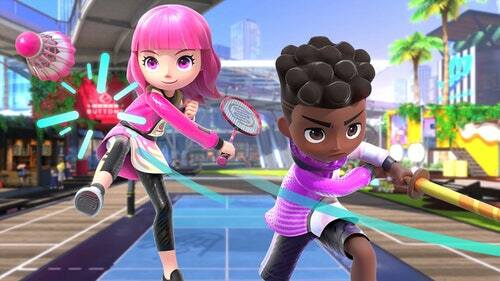 The Telegraph
FIFA and EA sports are splitting: a look at 30 years of game innovation, and what fans can expect next

EA Sports and FIFA will part ways after almost 30 years of collaboration. This is surprising for a number of…