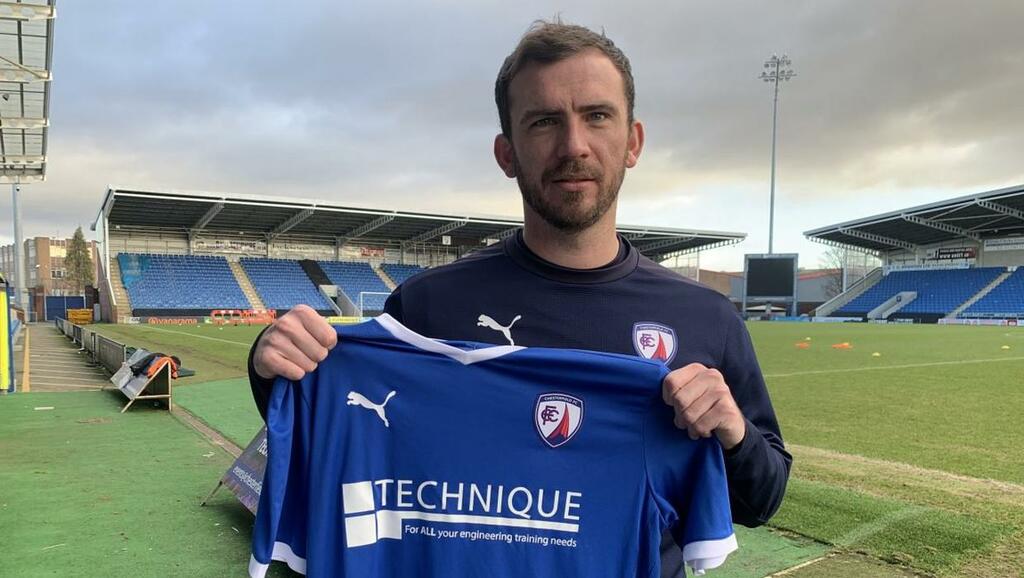 A 14-year career in England as a professional saw Dubliner Gavin Gunning take a few wrong turns and make some bad choices.

But there’s a touch of steel about the defender, which has allowed him to sustain that cross-channel career. That steel is needed by Gunning (30) this weekend as he faces up to the current European champions, a battle between Premier League contenders Chelsea and his own Chesterfield side, who are top of their league, England’s fifth tier.

Ten weeks ago, he suffered a severe facial injury in the line of duty that needed surgery and requires him to wear a mask today.

“I fractured my face, eye socket and nose. I have two big plates in my face right now. There’s one plate in my cheekbone and the other is right above the eye,” Gunning says.

“We played Eastleigh in the league a few weeks ago, I went to head the ball, but the player I was marking swung his foot and took the head off me. I don’t know how he managed to do it.

“If it was another inch to the left, I’d have lost the sight in my left eye, so I was lucky. It could have been very serious, but thankfully I didn’t lose the eye. I missed a few games, but I’ve played in the last two matches and we’re unbeaten, so it’s all good.”

Meeting Chelsea at Stamford Bridge is a reward for promotion-chasing Chesterfield and their efforts in the Cup to date, including a win away to league side Salford City in the last round. Playing at a ground like Stamford Bridge is also a reminder for Gunning of where he could have been. Touted as a prospect when he joined Blackburn Rovers from a brilliant Crumlin United side, he never made it at Premier League or Championship level, spending chunks of his career in the Scottish top flight or the non-league scene in England.

Injury was one major roadblock, but Gunning also looks within.

“I had quite a big reputation when I first came over and I was pushed into the first team at Blackburn at an early age, but I think that was detrimental to me in the long run,” he says.

“You have to be able to deal with it all. Moving away from home at a young age is tough and then you have the pressure of being there and trying to make it. You are getting paid to be a footballer and you have to grow up quick, and I didn’t do that.

“My attitude was the problem. My attitude was sh*te. Everything you shouldn’t be doing, I was doing. People tried to put me straight, but I didn’t listen. You can bring a horse to water, but you can’t make it drink, and I didn’t want to listen to people when they were talking to me. I got a reputation and kept going the same way, and once I finally got myself straight, I had all those injuries. I still had a good career over here.”

International ambitions were also unfulfilled. At one stage, he was mentioned by Giovanni Trapattoni and he was due to join the squad, but an ankle injury ended that dream.

“At times, I thought of jacking it in,” he says. “I was close. I was meant to go into the Irish squad when Conor Clifford was in, but I did my ankle and couldn’t go. Then when I was doing well in Scotland, in the team of the year and talk of million-pound bids, I couldn’t get in. I was in the Championship and didn’t make the squad and then a few years later, lads from the League of Ireland are in the Irish squad.”

Yet a batch of the Gunning family will be in London this weekend to see Gavin play: “Going to Stamford Bridge is a big deal. We know how tough it will be, so we have to try and enjoy it.

“I am getting that bit older now. I’ll tell the younger players to enjoy it while they can,” he says, aware that promotion back to the Football League is a priority for his club, which regularly host crowds of 8,000.

“I can’t see Chelsea going easy on us. They will want to win the FA Cup this season. Tuchel seems like a manager who is very keen to win trophies. They could make a load of changes and still put out 11 internationals against us, but I will enjoy today.”