Mayo v Tyrone: What time, what channel and what are the teams? All you need to know about the All-Ireland SFC final 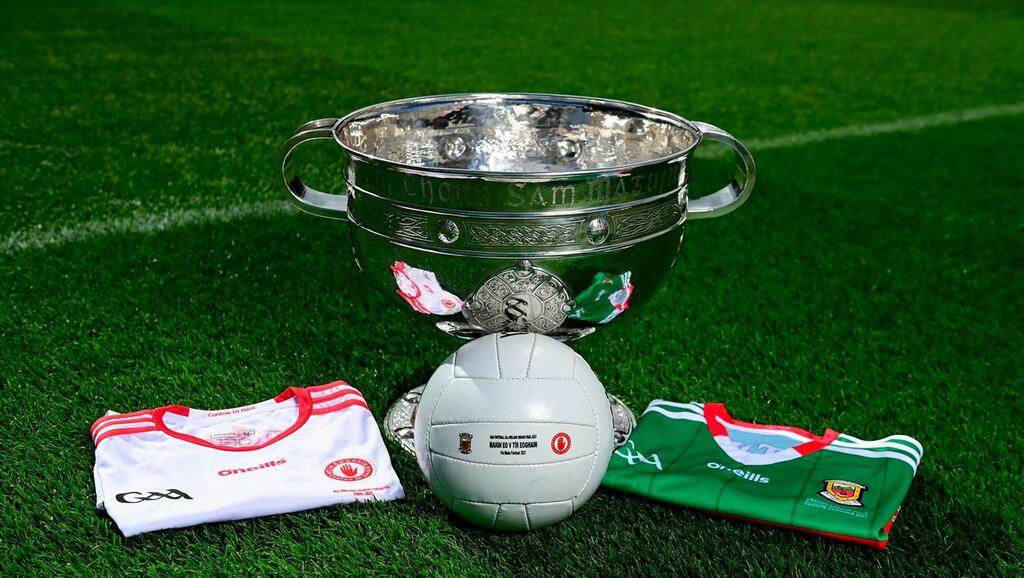 Mayo attempt to bury a 70-year hoodoo when they take on Tyrone in the All-Ireland SFC final on Saturday with both sides chasing their fourth title.

Here is everything you need to know about the game:

What time is throw-in?

As always, RTE will be showing the match live with their build up starting at 3.30pm on RTE 2 and on the RTE Player.

The match is also on Sky Sports Arena and Sky Go with their coverage getting underway from 4.00pm.

What are the teams?

James Horan has revealed two changes from the side that started their epic semi-final ambush of Dublin.

Oisín Mullin is not among the named 15, but his omission is unlikely to dampen speculation that the All Star could yet be parachuted into Horan’s defence before tomorrow’s 5pm throw-in.

Instead, the promoted duo are Enda Hession of Garrymore and Bryan Walsh of Ballintubber, replacing Eoghan McLaughlin at left half-back and Darren McHale at left half-forward respectively.

The Mayo boss has yet to name his substitutes bench.

Meanwhile, Tyrone joint managers Feargal Logan and Brian Dooher have given a vote of confidence to the same team that started their semi-final win against Kerry for tomorrow's final.

The Ulster champions have elected to continue holding former All Star Cathal McShane in reserve despite his impact against Kerry when he scored 1-3.

What are the managers saying?

Mayo manager James Horan: “I don’t know about obsession. You definitely need to be a bit mad, so bordering obsession is probably fair.

“But I genuinely love what I am doing. It’s not too often you get a bunch of guys pulling the same way, trying to improve and grow without any major complications. In work or general life, it’s very rare you get something so pure and so honest.

“So, delighted to be part of that and try and help in some way to make it happen. There’s madness and stubbornness and all that, they’re important parts of it.”

Tyrone joint-manager Brian Dooher: “Against Kerry, it was a chance to get to an All-Ireland final, which was the big thing. It was Kerry, surely, and Kerry are a great team, it was a big challenge for us. But you’re playing in an All-Ireland semi-final, you’ve the opportunity to get into the final, that was our primary aim, mine certainly.

“We had a lot of learning to take, obviously, from the six goals we conceded (in the league), if we were going to concede six again we’d be in serious problems. That is one thing we had to look at and thankfully we did. We sailed close to the wind a few times, a bit too close for my liking, but thankfully got over the line.”

What are the pundits saying?

Tomás Ó Se: "I just detect something a little different about Mayo this time, something incorrigible. They’ll meet Tyrone’s ferocity in the middle third, so I’m going for them to bridge that gap to ’51.

"But, remember, any verdict is based on tiny fractions here."

Ciarán Whelan: "While history and the psychology of sport suggests that Tyrone could have the upper hand because of Mayo’s track record in All-Ireland finals, this team doesn’t play under the pressure of the mental baggage of a 70-year wait to end their Sam Maguire famine.

"This is a new Mayo team and often younger players cope with pressure better because they are not burdened by history."

What are the odds?