French president Emmanuel Macron launched a scathing attack on far-right rival Marine Le Pen, saying her true “authoritarian” intentions were showing after she banned a team of reporters and did not rule out a return of the death penalty.

Mr Macron, a pro-European centrist, became president in 2017 after easily beating Ms Le Pen when voters rallied behind him to keep the far-right politician out of power. This time, he is facing a much tougher challenge.

He is slightly ahead in polls, but before last Sunday’s first round Ms Le Pen successfully tapped into anger over the cost of living and a perception that Mr Macron is disconnected from everyday hardships – and she has continued to press on those points.

Criticised for not properly campaigning in the run-up to the first round, Mr Macron has changed tack ahead of the April 24 run-off. He has headed to areas where people voted against him and has adopted a more aggressive rhetoric towards his rival.

He has categorised Ms Le Pen’s manifesto as full of lies and false promises that conceal a far-right agenda that ultimately would lead to France’s exit from the European Union.

Yesterday, at a news conference outlining her vision of democracy under her presidency, Ms Le Pen was quizzed why a team of journalists from a popular evening show had been refused accreditation.

She tried to brush it off, saying that the show was entertainment rather than journalism and that she reserved the right – now as a candidate, and later as president if elected – to choose who can come to her news conferences.

“Despite all the efforts, the true face of the far right is coming back. It is a face that doesn’t respect freedoms, the constitutional framework, press independence, and fundamental freedoms – rights which are at the heart of our values, such as the abolition of the death penalty,” Mr Macron told France 2 television. He added it was the start of an “authoritarian drift”.

Ms Le Pen, who has made a concerted push to detoxify her party’s image with a less inflammatory brand of eurosceptic, anti-immigration populist politics, retorted that Mr Macron was showing “weakness” and was in no position to give lessons on how to handle the press.

Mr Macron has had a bumpy relationship with the media during his presidency and last week was criticised for refusing to take part in several prime-time shows ahead of the first round of voting.

“He’d be better off going into the substance of my project. It is known, transparent. We can discuss it and argue over our disagreements,” Ms Le Pen told reporters during a campaign stop outside of Paris.

Ahead of the second round, both candidates are seeking to win over left-wing voters, especially from hard-left third-placed candidate Jean-Luc Melenchon. Mr Macron is hoping that by once again demonising Ms Le Pen he can sway enough voters to block her path.

But he is also struggling to convince working-class voters to back him. Ms Le Pen has veered to the left on economic issues and focused her attacks on Mr Macron and his plans to raise the retirement age. He has indicated this week he would water down his proposals as he tries to lure left-wing voters.

Mr Melenchon’s party launched a consultation yesterday to ask his supporters if they plan to vote for Mr Macron, put in a blank ballot or not vote.

“Neither Emmanuel Macron nor Marine Le Pen are up to the task,” he wrote. “However, the two are not equivalent.

"Marine Le Pen adds to the project of social damage that she shares with Emmanuel Macron a dangerous ferment of ethnic and religious exclusion.”

He made clear, however, that, even after the consultation closes on Saturday, he will give voters no instruction on what they should do on April 24 – whereas other parties have urged voters to vote for Mr Macron in order to block the far-right.

Mr Macron’s charm offensive with left-wing voters could be hurt after former conservative president Nicolas Sarkozy, a reviled figure on the left, on Tuesday endorsed him. This forced Macron to deny there was any wider political agreement with Sarkozy.

Macron will need a new majority after legislative elections in June, and political sources have said Sarkozy’s endorsement could pave the way for an alliance between the centre-right Les Republicains party and Macron’s LaRem. 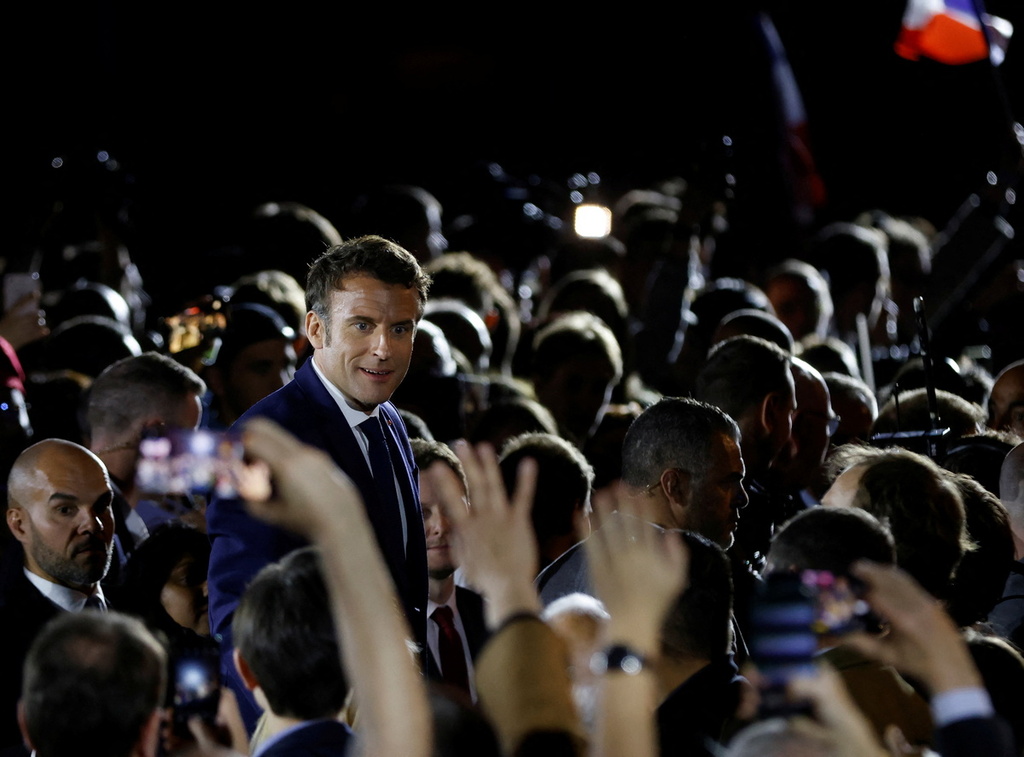 Reuters
One subscription that gives you access to news from hundreds of sites
Le Pen's renewables ban plan is an 'aberration', Macron says

Reuters
The French election, round two

French President Emmanuel Macron won the first round of the presidential election last Sunday, but he's still in trouble. He…