Kenneth Branagh: ‘I was being English at school and Irish at home. I didn’t want to upset my parents’ 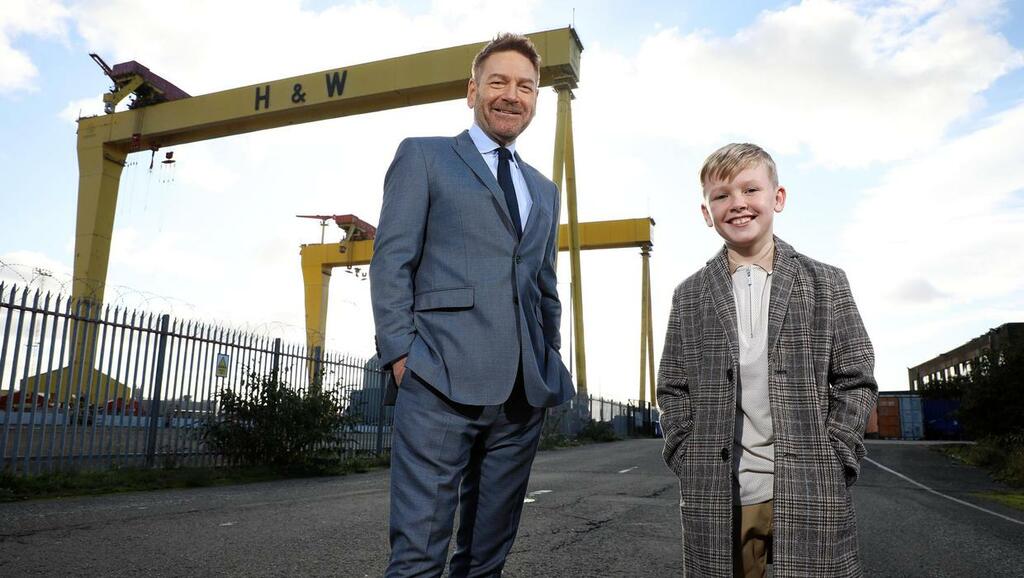 Though he has quietly pointed it out on numerous occasions, Britain has never quite accepted the fact that Kenneth Branagh is, in a sense, Irish. The multitasking Shakespearean was born and raised in Belfast, and left for England at the age of 10 following the outbreak of the Troubles. That departure, he tells me via Zoom, was “probably the most significant moment of my life”, a cultural and familial sea change which marked him deeply, and left him with a haunting sense of loss.

“I’ve always wanted to write something about Belfast,” he says, “and I initially thought I might be able to do something about my grandparents and their earlier lives. But in the end, I couldn’t get away from that moment which quite literally changed the direction of my life, how I would sound, where I would live, possibly the career that I would have. It was a moment of traumatic change that had been preceded by this feeling of being entirely and utterly settled.”

Born on December 10, 1960, Kenneth was the second son of working class Protestants Frances and William Branagh, and grew up in and around the Shore Road on a street that was home to both Catholic and Protestant families. In his elegiac film Belfast, that childhood is presented as a happy and almost enchanted life, a period of harmonious calm before the storm of sectarian violence broke.

“People did get on,” he remembers. “I mean, there were the usual challenges, and plenty of things not to like: in those tight communities people knew your business too much. People were very proud, and when economic hardship occurred, a lot of people visited the pawn shop.” But, surrounded by parents, grandparents and friends, Branagh’s Belfast childhood was overwhelmingly happy — until the Troubles came.

“I like sport very much, and I’m always fascinated to see people when they’re in the beautiful state of being on song: they have technique, talent and they know who they are, they’re entirely present,” he says. “Before a riot happened on our street, I felt my life was like that. Life was Danny Blanchflower, Spurs, Catherine [a Catholic girl he had a crush on] and films. And when somebody needed you, 15 people yelled across five streets and you went back like a sort of magnet.”

In the film, Caitríona Balfe’s ‘Ma’ is horrified when she discovers that her young son Buddy (Jude Hill) has got mixed up in the looting of a supermarket, and makes him take what he’s stolen back to the shop. The incident is based on real events.

“When I got involved in that looting of the supermarket, it was a real tipping point for my mother,” Branagh says. “She was just incandescent with rage at the idea that I would have stolen something. But even at the time, she realised that if it’s got to this pitch, something’s got to change. She thought, I can’t be drawn into this — the madness had overtaken both of us.”

Branagh’s Belfast, which co-stars Jamie Dornan, Judi Dench and Ciarán Hinds, is packed with colourful minor characters who flesh out the story and give it veracity. Like the Bible-thumping minister who urges young Buddy and his family not to stray from the righteous path. “I think the church was maybe my first introduction to showbusiness,” Branagh says wryly. “I mean this guy would really give it all, but he needed a smile for the old ladies too.”

The film is witty on how Buddy understands distinctions between his own religion and the more exotic and continental alternative of Catholicism. “Frankly,” says Branagh, “my understanding of the Catholic religion remains as sketchy as it was back then, and about as sophisticated as my mother’s — ‘they get a lot of water thrown on them and then they’re all right’ kind of thing. But I think that anybody who went to church, whatever side you were on, you thought you were getting a rough deal.

“My friend Patrick Doyle, who often writes the music for my films, he’s from a large Catholic family and we often compare notes on what is more powerful, Catholic or Protestant guilt, and we reckon it’s absolutely neck and neck.”

Movies shot in black and white are hard to fund, harder to market. Branagh uses crisp monotone cinematography to convey the past, and also a sense of safety, but every now and then there are little glints of colour, as when Buddy’s granny is at the cinema with him and a flash of crimson flares up in her spectacles.

“Well, black and white adds a poetic dimension — and it persuades you that you’re looking into the past. It gives the viewer more time sometimes; it’s as if colour describes faces, while black and white goes to the interior somehow. But colour was how the stories I was describing always burst into my mind, almost like Sherbet dabs.”

Blasts of colour came courtesy of family visits to the cinema.

“I saw a lot of my films at the Capitol just up on the Antrim Road, just on the other side of the Alexandra Park. I watched Yellow Submarine there, a trippy film; and God knows what curious feelings were going through my mind when I saw Raquel Welch in One Million Years BC. But seeing those big Technicolour films of the 1960s in an often grey and rainy Belfast, these explosions of colour were really utterly transporting.”

In a film full of fine performances, Hinds’ portrayal of Buddy’s sage and charismatic grandfather stands out. “Ciarán responded very positively and instantly to the script,” Branagh says, “and I mean he was born and grew up less than a mile from where I lived, so he absolutely knew and understood this world. He’s charismatic, but he’s also got that sort of gravitas, he’s got the twinkle, and he’s got great soul as an actor. It was very beautiful to watch him work.”

Buddy is particularly close to his grandparents, but his granddad has a nasty cough, and their cosy world is about to be shattered by political and societal breakdown.

Not long after that riot that so marked the young Branagh, his parents took the fateful decision to leave Belfast for a new life in Reading. In the film, Buddy is traumatised by the very idea of abandoning the narrow streets and familiar faces of his old neighbourhood, and refuses to budge. That emotion, Branagh tells me, is not an exaggeration.

“It was certainly awful,” he recalls. “I just remember crying my eyes out when they ultimately told us we were leaving.

“It was an isolating experience, the Troubles were on the news every night, we were in a place where a lot of families of service personnel lived, it made us a unit, and then as individuals within the unit, entirely withdraw.

“From being a very happy and social kid, I became very isolated. I think my mother became very depressed, and my father did the best he could. My brother sort of embraced it a bit more, but for all of us it was very difficult.”

Children hate to stick out and young Kenneth got grief over his accent in Reading. “Sometimes people found it hard to understand us, and, for me, sticking out became the cardinal sin. You just had to find a way to disappear, because I didn’t feel I had any other real support network: everyone else in our family was working hard to just survive themselves, so I think as soon as you could, you shaved the edges off the accent.

“It was a survival thing, a coping thing. For a little while there, for two or three years I think, I was being English at school and Irish at home, because I didn’t want to upset my parents, by abandoning the mother tongue as it were.

“All of it was not a very comfortable feeling because, even then, with a limited capacity to understand it, you are aware of essentially living in disguise.”

All these years later, that familial trauma has been turned into a genuinely moving and hugely accomplished work of art, Branagh’s best film yet in my opinion. Last weekend, Belfast won Best Screenplay at the Golden Globes, and is expected to figure strongly in the Oscar nominations. Has making this film, I wonder, given him a sense of peace about his past?

“Ask me after we’ve shown this film at the Belfast Film Festival,” he says laughing. He did so shortly after we spoke, and the film went down extremely well. “Frankly, the two places where I think we’ll get what we might call the most robust reaction is likely to be in Belfast and Dublin. Certainly the film’s appearance all over Ireland is very important to me, and obviously it’s critically so in Belfast.

“But I always felt that the film had to be much more than me coming to peace with a certain period in my life, it was more to do with acknowledgement, and more to do with the idea of honouring your parents, and honouring that experience.”

I ask him if, after all this time, when somebody asks him where he is from, does he instantly think, Belfast?

“Well I’ve said it for many, many years, and people… it’s as if they don’t hear it, or they don’t understand it. But yeah, it’s a bit of a cliché that remark about how you can take the boy out of Belfast but you can’t take the Belfast out of the boy, but I think in my case I know it to be so categorically true. I’m from Belfast, and very happy to be.”

‘Belfast’ is released nationwide on January 21