Kane and Moura save sluggish Spurs from disastrous cup humiliation 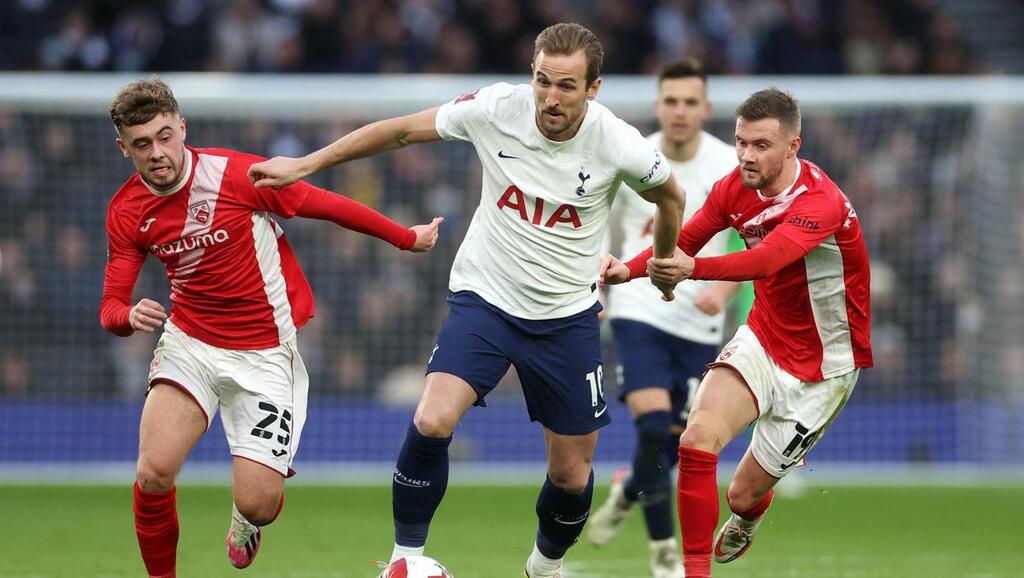 Antonio Conte described every Tottenham Hotspur game as a “struggle” last week, and for long spells this was up there with the worst of them under him or predecessor Nuno Espirito Santo.

Unimaginative, uninterested and sloppy, Tottenham were desperately poor for much of this meeting with League One side Morecambe, who took the lead and held on to it for more than 40 minutes.

It was only after Conte had implemented his emergency plan, summoning Harry Kane and Lucas Moura from the bench, that his side were able to find some conviction and cohesion in their attack.

Such a fact does not say much for the likes of Bryan Gil, Dele Alli and, especially, for Tanguy Ndombele, who was booed off in the second half before trudging straight down the tunnel.

To think, Morecambe did not even have their manager with them here. Stephen Robinson was missing because of a positive Covid-19 test, leaving 34-year-old assistant Diarmuid O’Carroll, a former Ireland U-21 international from Killarney Co Kerry, in charge in the dugout.

Lying 21st in League One and without a training ground of their own, the visitors offered commendable spirit until their resistance was finally broken at the end.

“The boys did themselves proud,” O’Carroll said. “Tottenham were finding it difficult to break us down and had to bring on players of that quality. We missed our manager, our leader, but hopefully he will be reasonably happy with what he saw.”

If the scoreline suggests a relatively comfortable afternoon for Tottenham, then the times of their goals should paint a far more accurate picture.

They had to wait until the 74th minute for Harry Winks to score their fortuitous equaliser. Then Moura struck in the 85th minute to give them the lead, and Kane added the third in the 88th.

“We struggled to be creative,” Conte said. “At the end we have to be a bit disappointed. We can do much better. We must not be happy, for sure, but we reached our target.”

It marked a disappointing last 20 minutes for Morecambe and their fans, but they certainly had their fun.

Cork man Anthony O’Connor put them in front from a corner, and top scorer Cole Stockton might well have doubled the lead in the second half.

Before the stars arrived from the bench, Tottenham were worryingly short of ideas.

Matt Doherty struck the outside of a post, and Ben Davies nodded over from a corner, but otherwise there was little for the home supporters to cheer in the first half.

With Kane in need of a rest and Son Heung-min out with injury, Conte started with Gil and Alli as his strikers. The experiment did not work, although the duo were not helped by the ponderousness of the midfield and defence behind them.

Conte could at least have been happy with the sense of security at the back in the first half an hour, although that was not to last either.

From Alfie McCalmont’s corner, O’Connor was able to stroll towards the back post and volley the visitors into an unlikely lead.

It was abysmal defending, verging on comical, and the 2,500 travelling Morecambe supporters enjoyed it fully. Their celebrations contrasted with the growing sense of anger among the home fans, who booed furiously at the break.

The unrest was magnified when the ineffective Ndombele was removed from the action. The midfielder, whose future at the club remains uncertain, was in no mood to rush off the pitch. Instead he ambled at snail’s pace, prompting many of the home supporters to jeer. If this is to be the end for him at Tottenham, it will not be remembered as a dignified one.

With Kane and Moura on the pitch at last, Tottenham finally began to move the ball with purpose.

Winks pulled them level when his left-wing free-kick curled into the far corner of Trevor Carson’s goal, and Moura struck after snatching the ball from Ryan McLaughlin and rounding the goalkeeper.

Kane’s tidy finish, reversed into the far corner, made sure of a victory that was much harder work than it should have been.