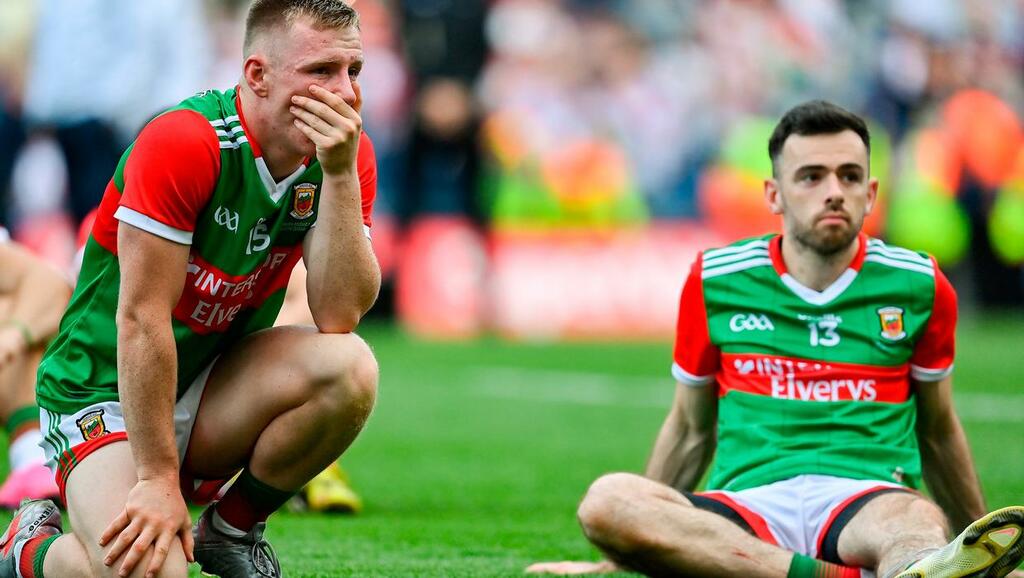 It didn’t take long for the Mayo jokes to start. Even before sunset on Saturday evening, they were whirling around social media, WhatsApp groups etc, some new, some rehashed, but all poking fun at the beaten All-Ireland finalists.

Hilarious. Same old Mayo – always losing finals. How many is that now? Ten defeats and two draws in 12 finals over the last 32 years. How could they miss out so often? Is the curse real?

No All-Ireland for the past 70 years. Head-wrecking stuff for Mayo, but apparently a source of mirth elsewhere.

Ok then, so what is happening ‘elsewhere’? How many people reflected on their own county’s fortunes before chuckling at the latest Mayo joke that bounced their way over the weekend.

There are no gags about Galway, Meath, Kildare and Cork, who between them have reached the grand total of two All-Ireland semi-finals in the last 10 seasons.

Nothing either about Down, Armagh, Derry, Monaghan, Roscommon, Laois, Cavan or Offaly, who between them have been in only three semi-finals over the last 15 seasons.

And for all of Donegal’s promise, they haven’t reached a semi-final since 2014, the season they beat Dublin before losing the final to Kerry.

Tipperary, a county where hurling gets first call, have a better record, reaching the last four in 2016 and last year.

Let’s examine Galway, Meath and Cork, the trio next in line behind Kerry and Dublin on the All-Ireland honours table, and Kildare, a county with a healthy regard for itself and its status as a football power.

It’s 20 years since Galway last won the All-Ireland, beating Meath in the final after availing of re-entry to the championship in the first year of the qualifiers. A memorable season, but look what happened afterwards.

Since 2001, Galway have reached the semi-final only once (2018) and marked the rare occasion with a dismal performance when losing to Dublin by nine points. They were so far out of their depth that it could easily have been 15 points.

They have won only two (one a Division 2 final) of 17 games in Croke Park since 2002, an embarrassing return for a county which used to have a good record there.

So however much disappointment their neighbours endure, it’s surely better than living off distant glories.

At least Mayo are competing consistently at the business end of the championship, as indeed they have been doing since 2011.

Like Galway, Meath’s decline began after the 2001 All-Ireland final and has reached depths nobody could have envisaged.

A sole Leinster title, robbed from Louth in 2010, and two All-Ireland semi-final appearances – the last in 2009 – is all they have to show for the past 20 seasons.

Their subservience to Dublin over the last decade has been sad to see, yet it hasn’t encouraged the comedians who like to feed off Mayo.

Winning the All-Ireland 11 years ago was supposed to mark the liberation of a new Cork generation but it never happened. We all overvalued their 2010 success.

Subsequent events showed that the 2010 championship was seriously sub-standard (all four provincial champions lost All-Ireland quarter-finals) so Cork were probably lucky to even squeeze one title from that era,

Without a Munster title since 2012, the last season they reached the All-Ireland semi-final, the downward spiral has been the most pronounced in their history. And judging by their awful display against Kerry this year, the bottom may not have been reached yet.

Their only championship win against Division 1 opposition over the last nine seasons was against Kerry last year, while they also dropped into Division 3 and had to survive a relegation play-off earlier this season to avoid slipping out of Division 2 again. Anyone care to script a joke about that?

And what of Kildare, who have done damn-all since Mick O’Dwyer drove out of Newbridge for the last time 19 years ago.

Winning Leinster between 2002 and 2011 wasn’t all that difficult, but it still eluded Kildare, whose only All-Ireland semi-final appearance in the last 21 seasons was in 2010, when they lost to Down. Laois did even less since Micko departed in 2006.

Armagh’s first All-Ireland win in 2002 was supposed to herald a new era but after winning three of the next six Ulster titles, they tanked down the rankings and haven’t even reached a final since 2008. The legacy of 2002 is long spent.

There are several other counties who have either stalled or regressed. Over the last 10 seasons, Dublin, Kerry, Mayo and Tyrone have taken 32 of the 40 All-Ireland semi-final slots, leaving six others to fill the remaining 20pc.

Mayo have been in the semi-final nine times and the final six times. The grand prize has remained tantalisingly out of reach, but far from making them the butt of jokes and ignorant analysis, it points to a level of consistency that few others can reach.

Unlike soccer, where a top-four finish is deemed a success, only title winners are feted in the GAA. Mayo know that better than anybody but for as long as they maintain the consistency levels of the last decade, they will be in with a great chance of eventually making the breakthrough.

The county is hurting again this week but when the action resumes next spring, Mayo will be in a much better position than all except Tyrone, Dublin and Kerry. No amount of silly jokes will change that.

Something spooky at the Davin end?

An email from a reader, Noel Kelly, makes an interesting observation about the number of penalties at the Canal/Davin end of Croke Park which didn’t yield goals in All-Ireland finals.

Another that can be added is Trevor Giles’ miss in the Meath-Galway final in 2001.

Are there spooks at work at that end of Croke Park?

Kildare’s not so subtle distinction

The positions of Kildare senior and minor football managers are currently advertised on the county board’s website, with interested candidates given until 5pm on Friday to apply.

In the case of the senior job, the board, which has drafted in Michael McGeehin, director of Sport Ireland coaching, to help find a replacement for Jack O’Connor, also reserves the right to approach candidates.

The specifics for the minor position, which will have a three-year term, are equally detailed.

Intriguingly, there’s only one line attached to the minor job.

“Please note that this is a voluntary position and there is no capacity to provide remuneration.”

Isn’t that rather curious? Why was it deemed necessary to specify no ‘remuneration’ for the minor job but not mention it for the senior role? It’s sure to get tongues wagging.