Guts and glory is all well and good, but Mayo need to start producing better forwards 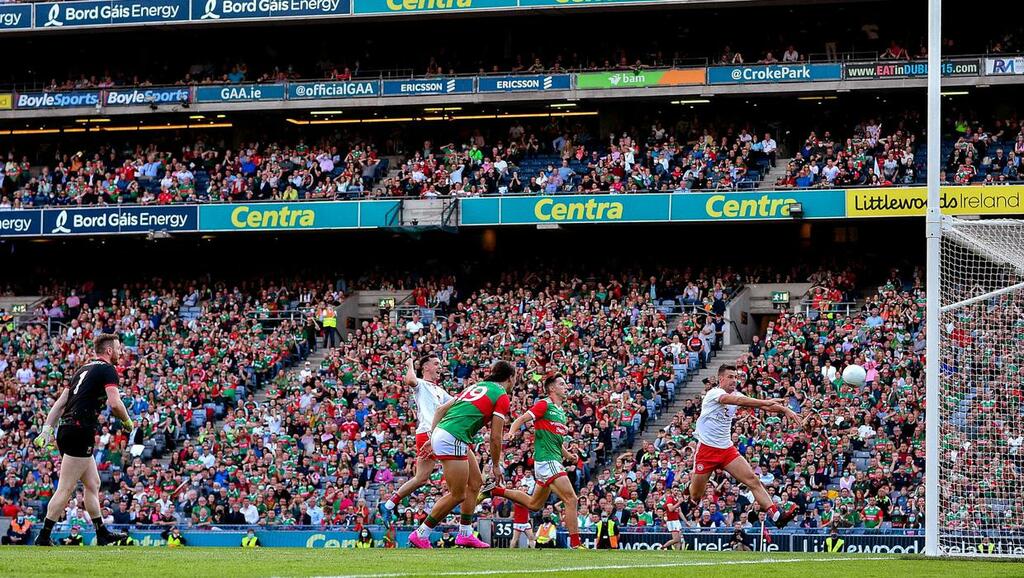 Admiration and disappointment. The two overriding feelings I felt coming out of Croke Park on Saturday. Admiration for what Tyrone had just achieved, and the manner and style in which they done it.

I make no apologies for saying I dearly wanted to see that group of Mayo players win an All-Ireland, and genuinely thought that they would finally do it this year. Having had the pleasure of watching so many of their thrilling contests over the past 10 years, it is impossible not to fall for their infectious charm.

At this stage, however, the patronising ‘Poor Mayo’ mantra has worn thin. Nor is it helping them face up to what they need to do to end their suffering. I am talking about facing up to some hard on-field realities that they need to address. Primarily, the technical and creative limitations of too many of their forward players continues to be an Achilles heel.

Natural forward guile, such as that displayed by Conor McKenna’s deft handpass for Darren McCurry’s match-winning goal. Or the creative instincts that combined Conor Meyler’s inch-perfect pass with Cathal McShane’s deadly first touch. Guts and glory is all well and good, but for a footbal mad-county the size of Mayo, they need to start churning out a higher standard of forward player. Croke Park demands it.

Irrespective of these limitations, my tipping them last week, was based on their ability to deliver a high-octane performance that would finally barge them over the line. When Mayo can’t deploy their all-action style of play, they quickly become a distinctly average team, as we bore witness to on Saturday. It wasn’t easy to watch as a neutral, albeit a biased one, so I can only imagine how it must have felt for their loyal supporters.

What relevance does this stat have you might ask? Firstly, it rubbishes any notion that this Tyrone team somehow came out of nowhere to win this year’s All-Ireland. Players like Peter Harte, Mattie Donnelly, Ronan McNamee and Niall Morgan have been ploughing their own lonely Sam Maguire furrow, as much as any of the Mayo players over the past number of years. Unloved by the wider GAA community, they just got no credit for it.

The steely reserve shown by Tyrone over the past few months has been forged from recent years of defiance in the face of bitter cold hard criticism from both outside and inside their county. Maybe Mayo could do with the same medicine.

Much has been made of the impact of Tyrone’s new management, and how ‘getting rid’ as so crudely put by many, of Mickey Harte was the makings of the current Tyrone team. Is it true to say that Tyrone would not have won this year’s All-Ireland with Harte still at the helm, but it is also true that they wouldn’t have won it without him.

Consistently rebuilding from the youthful ground up, Harte forged a winning culture and belief in Tyrone, that keeps driving them toward success, even in his absence. Standards set and maintained that keep Sam Maguire as a firm target for any new player coming in the panel. If they win an Ulster title, it was because it was always en route to trying to win another All-Ireland.

No man would have been prouder than Harte to see a group he nurtured for so long, finally get to the destination he first pointed them.

Brian Dooher and Feargal Logan, will rightly get the plaudits for masterminding what was a most unlikely All-Ireland In hindsight, they were handed a much stronger hand than many credited. Tyrone are deserved champions, and stand now as a benchmark for what a sizeable number of counties can aspire to.

Counties, my own included, will be queueing up to have a crack at them next year. Until then they can deservedly enjoy a winter of content. The manner in which they won this year, has brought football to a good place and they deserve huge credit for that. Comhghairdeachas.