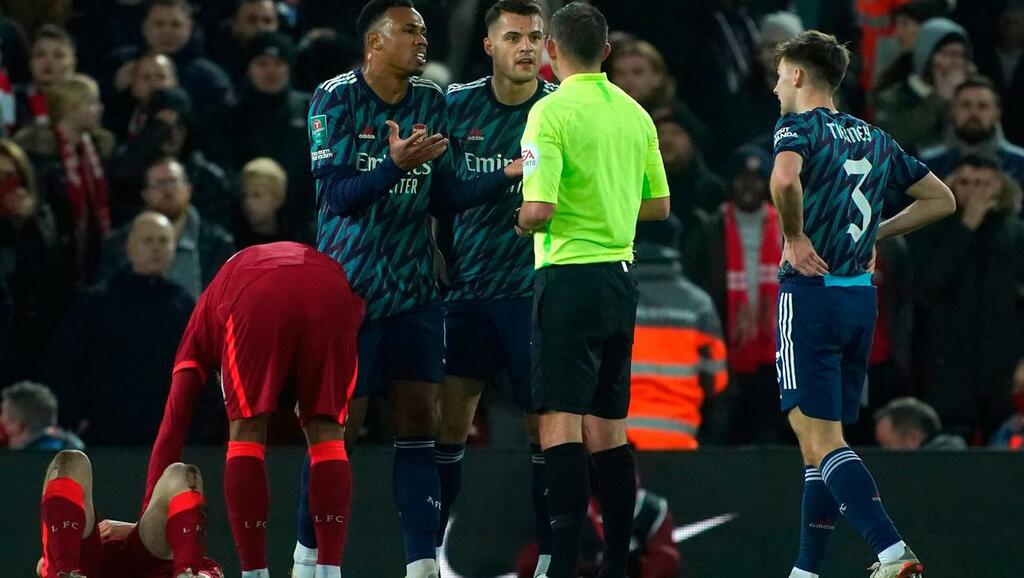 The timeless tradition of the Granit Xhaka red card has long been the signal for the kind of Arsenal collapse that launches a period of sober reflection at the club, and yet on this night at Anfield it was the trigger for a performance that felt significant for Mikel Arteta’s young team.

First things first: Xhaka went for that lonely walk early this time, his second red card of the season halfway through the first half and one which will see him suspended for the north London derby on Sunday.

In terms of timing and drama this sending-off was a Xhaka classic, albeit not quite as unhinged as some. In its aftermath was one of the finest away performances from 10 Arsenal players in recent memory and one that keeps them alive in this League Cup semi-final.

The two sides meet again at the Emirates Stadium on Thursday for a second leg that might have been academic had Liverpool been able to take advantage of the extra man and what would ordinarily have been an Arsenal side of very little belief.

A triumph, of sorts then for Arteta who, after the red card, immediately switched formations and then covered some yards on the touchline directing more than an hour’s worth of defensive shutdown.

His two original centre-halves, Gabriel and Ben White, were outstanding, and they were not the only ones.

Jurgen Klopp might have expected his side to have too much energy for a team that chose to defend on the edge of their own area, but they never reached that pitch of intensity until the very final moments at the Kop end.

When Takumi Minamino skied a volley from a loose ball in the area in that late siege it seemed that it would never go in, although it would be the way of this Liverpool side to go to London next week and win.

Nothing is certain, however, and there will be a feeling among the departing Arsenal squad that they have laid the platform for a semi-final win.

They certainly were not overawed by the scale of the task that presented itself when Xhaka was dismissed. For Xhaka, that critical moment was not as reckless or as misguided as some of his past dismissals, but one does not accumulate 12 red cards over a career without having some tendency in that way.

Against Burnley 13 months ago he grabbed the throat of Ashley Westwood. In August at the Etihad Stadium he departed for a dangerous challenge on Joao Cancelo. This was one was different, but in the end it was Xhaka putting his team in a snooker 24 minutes into a two-legged cup semi-final.

In the aftermath, he appeared to be attempting to convince Michael Oliver, the referee, that he was not aware of Diogo Jota arriving on his blindside, but it was clear that even Arsenal’s incorrigible midfielder had his doubts about the legitimacy of that argument.

He had been caught by a ball from the left side lofted nicely into the space behind Arsenal’s defensive line by Andy Robertson and from the moment Xhaka gauged its flight he seemed to know he was in the wrong place.

He lunged for it with a high boot as Jota cradled the ball on his chest and the collision was unavoidable: boot to body, card from pocket.

Oliver put the card back in his pocket and reached down to Xhaka to help him to his feet and to get him off as soon as possible.

Before then it had been a tidy performance for Arsenal that had not been without its setbacks. Martin Odegaard had tested positive for Covid before the match. The right-back Cedric Soares, who has featured just six times since the start of September, developed a problem within the first minute and eventually had to be replaced by Calum Chambers in the 11th minute.

Chambers found himself skipped around rather too easily by Robertson and Aaron Ramsdale wobbled once with a clearance. Otherwise he was not required to make any big saves.

The red card might have galvanised Liverpool, but for all their possession and territory they failed to create the chances that might overwhelm Arsenal.

Arteta opted to bring off Eddie Nketiah to get Rob Holding into what became a five-man defence to make his team even harder to break down.

It was painful to watch, but they lasted until half-time with Alexandre Lacazette left on his own up front and defending the edge of their area.

For Liverpool, the path forward was less clear. No Mohamed Salah or Sadio Mane to give them that break through the lines and a lot of delaying of the shot or cross in a style reminiscent of the most purist Arsene Wenger sides.

An hour passed and neither side had recorded an attempt on goal of any description.

One of those difficult nights for James Milner ended just after the hour when he was replaced by Curtis Jones. There was precious little room down the sides for Liverpool, although Minamino managed it once and could not keep the shot on goal.

If anything the best chance fell to Bukayo Saka, taking Kieran Tierney’s ball from the left on 72 minutes and only stopped by a fine Alisson save.

This was another fine Saka performance. A largely thankless task, outnumbered at every turn and a long way from goal when he did get the ball, the young man acquitted himself admirably and caused Liverpool to think twice every time he was in possession.

With 15 minutes left, Klopp threw it all in. Neco Williams on for the quiet Trent Alexander-Arnold. Joe Gomez in place of Joel Matip who looked like he might have picked up an injury. Alex Oxlade-Chamberlain replaced the more defensively minded Fabinho.

The possession count was close to 80pc and yet Liverpool might have had the tie in the bag.

They did eventually create the chances: a header for Jota, that volley for Minamino.

At the end of the game Klopp threw an arm around the shoulder of Saka and congratulated the Arsenal player. He was not the only young one in Arteta’s side who had come through a demanding test.