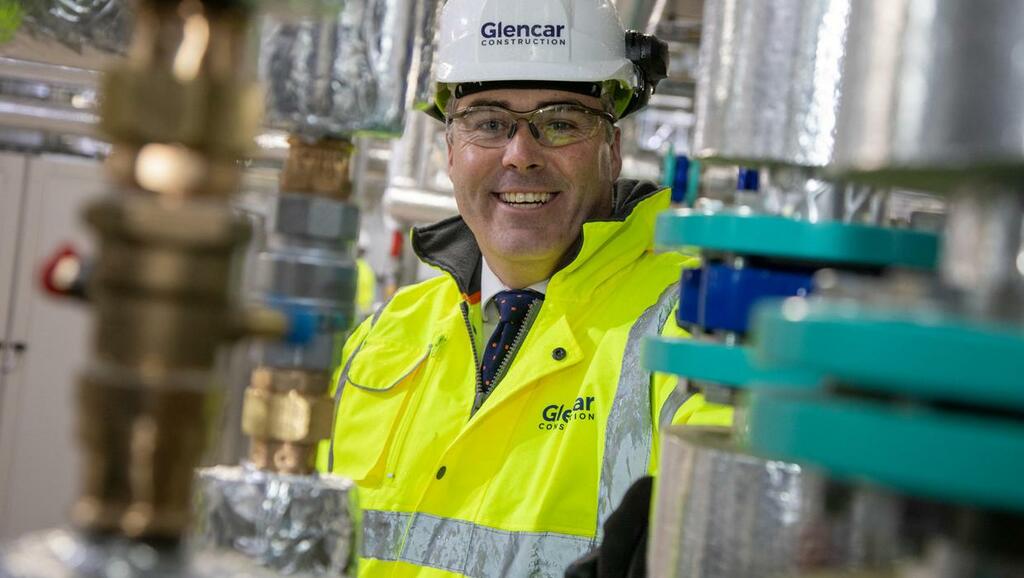 On an early December morning, the Sunday Independent visited to see a landmark £200m vaccination manufacturing and innovation centre (VMIC) in Harwell, near Oxford, that is on track for completion in May.

After our negative antigen tests, and being kitted out in boots, jackets and hard hats, we set off on a tour of the centre with McGillycuddy and one of his construction managers, Ronan Murphy, a University of Limerick graduate from Roscommon.

On the first floor of the 150,000sqft building – about the same size as two professional football pitches – there are banks of electrical control boxes and much pipework.

Two production lines will be installed in the open space to produce, carry and fill vials of vaccines. Various subcontractors are milling around in different areas. Glencar has 40 construction managers on site overseeing all of the activity.

All the structural steel for the building is prepared offsite and slid into place when it arrives, McGillycuddy says. About 40pc of the labyrinthine pipework is done that way. Building information modelling software alerts workers where there are clashes – two elements of the design occupying the same space, he adds.

A variety of mezzanines add space, while beyond a reception and office area on the ground floor will be 13 production rooms. Clean rooms, warehousing and cold storage capacity add to the compact design.

Glencar tendered for the contract in early 2020, beating four rivals to win the job. The week before we meet, the Financial Times reported that Boris Johnson’s government was planning to sell off the facility, with at least four interested buyers having tabled bids for it. McGillycuddy says he can’t comment on the report.

Many in the UK scientific community are dismayed at the possible sale of the VMIC. They and it are part of a life-sciences cluster in the London-Cambridge-Oxford triangle, contributing most of the sector’s estimated £74bn annual through-put. In total, 6,000 people from 225 organisations, including 30 universities will occupy 700 acres surrounding the centre, which was originally conceived in 2017 as a non-profit pandemic research facility.

“I know that other countries would like similar facilities – it’s been called the most advanced in the world – because they’ve approached us.

“It will produce 70 million vaccines every three months. This provides resilience against variants or more pandemics.

“It shortens production time and eases the process. In three months, it would produce enough to cover the UK and Ireland, and then could help supply the rest of the world.

“We were supposed to spend nine months working through the design. As the pandemic broke out, we were given two weeks to get up and running. Normally, we need to get water and gas mains and electrical infrastructure in place, or sometimes diverted, and it can take months. But we had people on site diverting cables within 48 hours.

"The main challenge was keeping pace with the design process,” he says.

While Glencar isn’t about to expand beyond these islands just yet to build more vaccine factories, it is expanding here in Ireland.

“We have 220 full-time members of our team at the moment, working across 40 projects across the UK. About 20pc of them are Irish, and about 10 of them will return home.

“We’ve opened an office in Killorglin, about 20 minutes from Glencar where I was born, and where my parents live. We’re opening a Dublin office in Citywest in March.

“We’re talking to tenants, landowners, developers in Ireland, looking at warehousing, logistics, life sciences. We’re also diversifying into some central London offices and student accommodation. Warehouses and logistics might only have three years left to grow in the UK after Brexit and pandemic-driven growth.

“Initially, we’ll have a core team of six people: some admin roles, and local estimators, overseen by a country director. The target for the first year is about €25m in revenue. As the workload grows, so will the team.”

Data centres are another area of potential growth the firm is evaluating.

“We’re looking at one project quite deeply. We’ve got some of the right people in-house. Others we’d have to recruit. We’ll pursue the right opportunity at the right time."

Glencar’s other clients have included Ocado, UPS, BMW, and Prologis – a partner of Amazon and Sainsbury’s. Typical warehouse construction time is 28 to 30 weeks.

“We’ve also been approached to work on various projects in Dubai, Saudi Arabia, and Australia. We’ve got enough on at the moment though.

“Ocado or Amazon might take us to those countries. We have evolved with them – learning, adapting, being agile along the way, without letting that impact the quality and delivery of the project too much.

“You might’ve seen a video where Ocado’s robots zoom around . It’s a bit sci-fi, like I might’ve seen in a film when I was a kid,” he adds.

Glencar’s rise stands out among its peers, including well-known Irish ones, according to Corkman Paul Whitnell, founder of the British and Irish Trading Alliance (BITA).

“Eddie brought great learning from McLaren. He surrounds himself with a great team of people who have the same values. He’s a great role model, with an infectious sense of enthusiasm and humour, underpinned by seriousness about problem-solving, quality and delivery. It’s easy to see why people gravitate to that.

“He plays his part in the Ireland-UK SME and construction ecosystem, along with people like Pat Gallagher, and Ray and Des O’Rourke.”

McGillycuddy’s father, Pat, chairs the company. He moved the family to Harrow, on the outskirts of north-west London in the early 1980s.

He spent 32 years running Gazeley, a developer and investor in logistics and distribution warehouses.

McGillycuddy Jr’s career path began with a construction management degree in Liverpool. “I was planning to study marketing, but my dad had other ideas.”

The McLaren founders are the other role models whose success he hopes to emulate. “They started with a £3m or so company, and it’s approaching £700m today. They’re very driven, and it’s all down to valuing their people.”

He and Chris saw an opportunity when they stopped doing warehouses and logistics projects. They’ve since hired some former colleagues. “People are both the biggest challenge and the biggest strength of our industry.

“It’s full of excellent people and some excellent businesses. When you grow, you want to bring people in who are as good as or better than the ones you have. You don’t want to dilute the skillset, or the quality of your service.

“Our people are the reason we’ve been so successful. We haven’t chased the growth. We brought in the right people first, and then we grew – and then we repeated that.”

Training is a big investment, along with infrastructure, software, and R&D. Apprentices and other young recruits are earning while learning – but he says it’s still a challenge to inspire more to join the industry.

“You can earn good money while having good craic. It’s innovative and inspiring. Mental health and wellbeing, health and safety, training, sustainability, and corporate social responsibility are all fundamental now throughout the industry.”

Brexit and labour issues haven’t been an issue for the company as much as material costs and supply chain delays have, he says. Over the past two years, the rise in costs averages between 15pc and 20pc.

“Steel, cladding, cement are all up very significantly, You can’t fix prices for longer than two weeks. Diesel price rises have impacted subcontractors. I can’t imagine prices will come back down, but I live in hope.”

The VMIC costs will have risen, but he declines to comment. “Our clients acknowledge the issues. There’s more negotiations and two-stage tendering. Some projects have been pushed to next year as well.

“With an open book, we can share risks with clients, and mitigate them. In the last year especially, most of the industry got burned on costs. We’re having to tough it out.

“We’re only successful because of our supply chain. They like to work with us. If we make money, they make money – and we all want to go to the next job together. If I don’t treat them well, they won’t work with us again, so our business will suffer.

“We’re customer-focused. The best reference I can give is that we get repeat business from them.

"At the heart of what we do is the design of a building. Having the right architects working with our design team is key, working with the right structural engineers, the software to coordinate it all, manufacture it and then install it get the end result.”

Glencar had revenues of £160m for the year to October. Gross profit was down from 6pc to 5.7pc. “Our margin is generally higher than that. Our overheads have increased to accommodate next year’s growth.

“This is a high-turnover, low-margin industry. You have to run the business as efficiently as possible to protect the margin you have,” he says.

He’s batted away a number of approaches from prospective buyers and investors, including private equity firms. The business has always operated without any debt.

He and Gleave own the business – and they plan to stay private, rather than float on the market at any stage.

“We aim to double our headcount, and get to about £500m turnover, however long that takes, and be excellent at that,” he concludes.

What management lessons have you learned during your career?

“Know when to say no to a client. Make sure you enjoy what you do. Train and reward your team, and you’ll retain them. Give them responsibility at the right time. If they enjoy working for you, they’ll help attract other people.”

What’s the future of construction?

“About 20pc of our team are women. More will go into management roles. AI and robotics, as seen in our Ocado work, aren’t quite there yet for construction. Engineers and technicians will increase IT skills. A solution combining all the software we use would be a unicorn.”