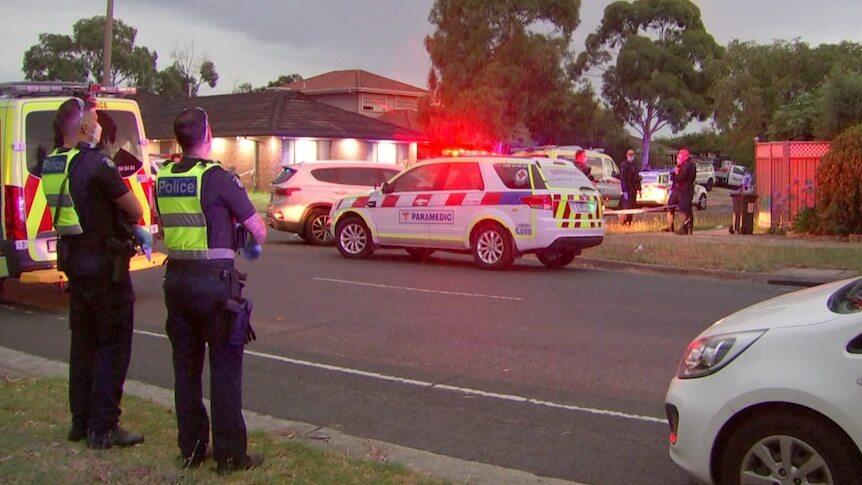 Police say support is being offered to a 10-year-old girl after two people were killed in a domestic violence stabbing in Melbourne's north.

WARNING: This story contains details that will distress some readers.

The girl was in the house when her mother and younger sister were stabbed to death, allegedly by her father.

Officers were called to the Mill Park home around 7:50pm on Thursday after a neighbour reported a stabbing.

Detective Inspector Dean Thomas said the officers discovered a man, woman and two girls aged six and 10 at the house.

The 39-year-old woman, who Inspector Thomas said was pursued by her attacker as she ran to a neighbour for help, died at the scene from her injuries.

The six-year-old girl was taken to hospital in a critical condition but died on Friday morning.

The 40-year-old man began to injure himself after he was confronted by police, who pepper-sprayed him before he was taken to hospital with critical injuries.

"I believe at this point in time, and again, things need to be confirmed, but I believe that the male and female are husband and wife and the children are from that relationship," Inspector Thomas said.

He said the 10-year-old girl had managed to escape the attack.

"She was not physically injured so she's currently in the care of the Department of Health ... and she's been speaking to police overnight," he said.

Inspector Thomas said police were still waiting to interview the man, who remained in a critical condition in hospital under police guard on Friday morning.

But he confirmed police were not looking for anyone else in relation to the killings.

He said it was still "very early" for police to work through what had motivated the attack, but said the man was previously known to police.

Inspector Thomas said he believed emergency services had been called to the property hours earlier on Thursday to assess a person at the home.

"What I can tell you is that we believe emergency services were called to the address in Mill Park at about 12:50pm yesterday," he said.

"We believe that a person at the address was assessed at that point in time and ... cleared."

In a separate incident, two men died in a shooting incident at Mordialloc in Melbourne's south-east.

Police were called to a McDonald Street property shortly after 9:00pm yesterday following reports of gunshots.

When the officers arrived, they found two men aged 72 and 62, who were being treated by neighbours for gunshot wounds but died shortly afterwards.

He was on Friday evening charged with two counts of murder, conduct endangering life and serious assault of police.

Anyone with information on either incident is urged to contact Crime Stoppers.