'From the minute I signed, I had belief in myself' - meet the Northern Irish teen making his mark at Liverpool 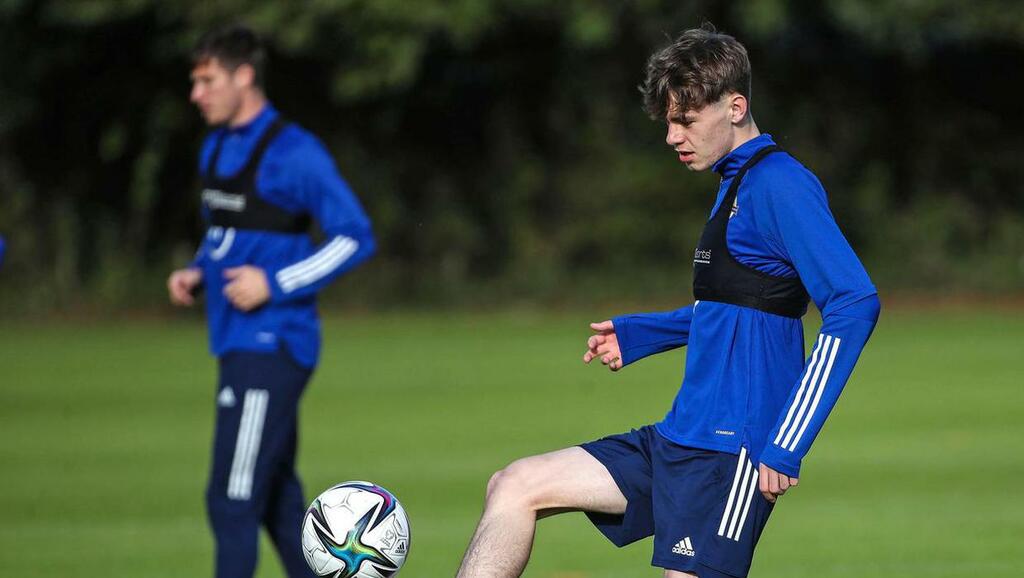 “While we’re living, the dreams we have as children fade away.”

It wasn’t the most uplifting of Oasis lyrics but it was one that, if most of us are brutally honest, can often ring true.

We all wonder at one stage of life if we have what it takes to be the next Lionel Messi, Liam Gallagher or Leona Maguire.

Then as we grow into adulthood, those misty-eyed wonderings slip into the past, replaced by perhaps more achievable goals.

But what if they don’t?

It’s the rather curious position in which Liverpool and Northern Ireland star Conor Bradley now finds himself. Still aged only 18 – barely past a child even now – he’s coming to terms with the realisation that his biggest ambition has been ticked off already after he made his senior debut for his boyhood club.

Not only that, but he did so alongside players he had just a couple of years ago idolised from afar.

Back in 2019, then 16-year-old Bradley was watching on from his home in Killen, near Castlederg in County Tyrone as the likes of Divock Origi, Jordan Henderson and Andy Robertson inspired Liverpool to Champions League glory.

Then all of a sudden, there he was lining up alongside them in a League Cup win over Norwich at Carrow Road last month.

How does a teenager begin to even comprehend such a rise from starry-eyed kid to team-mate?

“It’s been mad when you think about it but that’s the main thing, I try not to think about it too much so my head doesn’t go away,” he smiles. “I try to keep myself grounded and take everything in my stride.”

That’s his mantra, which he repeats time and again during this exclusive interview with the Belfast Telegraph.

It’ll be music to the ears of mum Linda, who told us two years ago, when Bradley initially signed for the Reds in the direct aftermath of the Champions League win, that her and Conor’s dad Joe had made a conscious effort to keep him “grounded” despite his obvious talent.

It’s evident that he hasn’t forgotten those lessons, even though he has already hit previously unfathomable heights.

“I’ve learned about it with the club,” he muses, considering how and why he can seem so blasé about his remarkable position within one of the best squads in world football.

“They help you to deal with all of these situations. That’s the way I’ve been brought up too, not to get too above myself and to take everything in my stride.

When we spoke back in 2019, Bradley was still a boy about the embark on a huge adventure.

Back then, he spoke about “one day” making the step to the Liverpool first team but, in truth, it still seemed a long shot, considering the amount of young hopefuls that get taken in, churned up and spat out by top Premier League clubs.

The thing is, it never seemed unrealistic to Bradley, and perhaps that’s another key to following his “taking in my stride” slogan.

While, for most of us such heights are pipe dreams, in one house in County Tyrone, this ambition was always more than that.

“I wouldn’t have signed for Liverpool if I didn’t think I could play for them,” he says. “From the minute I signed, I knew. I had belief in myself that I’d be able to one day pull on the shirt for the first team.

“To go on and do that after all the hard work I’ve put in over the last two years in Liverpool has been unbelievable and I’m just really proud.

“You just have to have confidence in yourself. There’s no point in even playing football if you don’t believe in yourself.

“You just need to see in the future that you’re able to do those type of things. I was confident and thankfully it has come true.”

Bradley’s new team-mates are household names across the globe, in fact Mo Salah is ever-more increasingly entering the debate as potentially the greatest player in the world.

But it’s company that Bradley has had to become used to keeping.

“It’s surreal when you first meet them,” he laughed, a brief admission that deep down there is a purposely hidden realisation of just what he is achieving.

“I feel like I’ve been with them quite a bit now so it has sort of sunk in and I just see them as team-mates but the first time I went up to first team training, obviously it was a bit surreal just seeing them in real life.

“They’re all good to me and help me out if I need it. Andy Robertson gave me quite a bit of help before the Norwich match, telling me to play my normal game and to go out and show what I can do.

“Things like that help you a lot when you’re a young player coming through. I’m thankful to him for what he did and how he settled my nerves a bit.”

Bradley’s even drawn comparisons to the Scotland captain for his early performances for club and country, admitting himself that their tackling abilities and energetic styles have their similarities.

But of course arguably the greatest star of all at Anfield is the one in the managers’ office as Jurgen Klopp is respected and loved not only amongst the Reds’ fanbase but across the sport.

“He’s sound, like,” says Bradley, explaining how he has found working with ‘Jurgen’ – the giver of ‘decent’ hugs - as the young full-back casually refers to his legendary boss. “He’s good to me and I’m very thankful to him for giving me my debut.

“Before the Norwich game he gave me quite a bit of advice.

“He was just saying that I needed to play my own game, don’t be too nervous, just take my time on the ball, look up and be brave. He told me not to always play the safe pass but to try things and especially when I’m in the final third, be creative and try to create opportunities for the forward players.”

When speaking about his early promise, Bradley’s old coaches have lined up to explain how he followed instructions to a tee and it’s clear that hasn’t changed as his early senior displays, be they in Liverpool red or Northern Ireland green, have displayed that fearlessness and refusal to take the easy option on the ball.

Even after conceding a penalty on that landmark night at Carrow Road, Bradley eased back into his rhythm and the fact he played the full 90 minutes spoke volumes for how he had performed.

“As soon as I gave away that penalty, I had a little bit of a panic but I tried to get that out of my system as soon as I could and carry on with the game,” he says, again shining a light into the mentality required to do what Bradley is doing.

“I didn’t want that moment to ruin my debut. I wanted to make sure it was a strong performance whether I’d given away the penalty or not.

“My family were obviously very proud. They were at Carrow Road. My mum and dad have both supported Liverpool since they were young so to see me start was unreal for them too.

“I was delighted with how it went. It really was a dream come true.”

There was another positive first impression made last month at Windsor Park when Bradley was brought on for his home Northern Ireland debut as a second half substitute in the World Cup qualifier against Switzerland.

Having surrendered possession, he thundered into a tackle on Ricardo Rodriguez, who had netted that controversial penalty back in 2017, to rapturous applause from the Green and White Army.

“When I came on, I got a good reception so that was unbelievable but then I heard that big roar after the tackle. It was mad – the stuff of dreams really,” he said, underlining what a big 2021 it has been so far.

But, as his attitude would indicate, Bradley isn’t content to dine out on his short spell in the sun, rather these are just the first fruits of years of hard graft, with the full harvest still to come.

“I’d like to be a regular for Northern Ireland, starting every game. I’ll be working hard for that,” he said, discussing where he sees himself in five years’ time, when he’ll still only be 23.

“And I’d say the same for Liverpool as well, I want to be starting or definitely in and around the first team anyway and picking up as many games as I can.”

The obvious barrier to the latter is a certain Trent Alexander-Arnold. In the conversation as the best right-back in world football, he won’t be easily displaced.

Perhaps that’s why Klopp and Northern Ireland manager Ian Baraclough have discussed moving Bradley back to his natural berth on the wing or even into central midfield.

For the man himself, it hardly really matters.

“Exactly, it’s my dream club,” he laughs. “I’m just happy to play anywhere. As long as I’m playing I’m happy. I feel like I could do a job further forward on the wing or in midfield but I’m happy at right-back as well. Wherever they want me to play, I’ll play.

“Trent’s unbelievable. He’s one of the best right-backs in the world but I’ll be at Liverpool as long as they want me. I’ll keep learning off Trent and the more I can take from him and put into my game, the better a player I’ll be.”

It is a little ludicrous that the 18-year-old lad from Killen is on first name terms with some of the biggest names in football.

But there’s only one way he’s approaching it.

“I just take it all in my stride and keep trying to work hard,” he concluded. “I go into games just focused on the fact that I want to play well and impress the manager, Jurgen, and see where that takes me.”

Conor Bradley is living his dream and he knows it, but at the same time, he never doubted that this ambition would turn into reality.

Perhaps that’s just one difference between the true elite and rest of us mere mortals, who watch the dreams we have as children fade away.