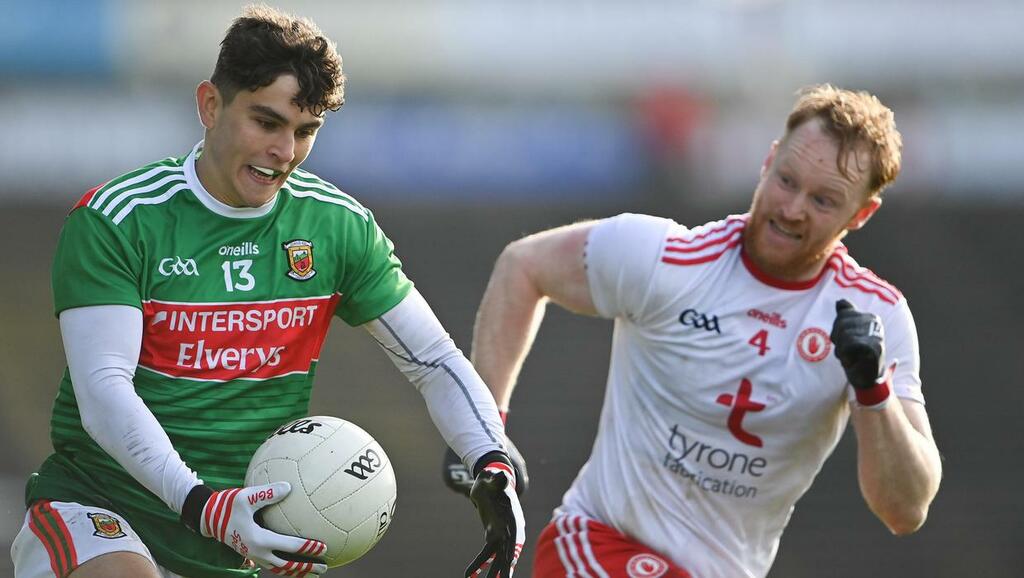 Con Houlihan once quipped that that great GAA word ‘schemozzle’ was, in truth, Yiddish for a fracas.

Well, I think we might see one or two of them erupting in Croke Park tomorrow during an All-Ireland final that nobody predicted. I cannot wait for this game for the simple reason that it’s almost impossible to know what’s going to happen here.

You can make an argument for either Mayo or Tyrone, absolutely. But anyone who calls this game emphatically in advance is either a chancer of the highest order or just a plain liar. Either way, they’re bluffing.

Maybe the only two things we can say with certainty are (1) the physicality will be off the charts and (2) whoever wins this will be worthy holders of the Sam Maguire.

It’s been a strange championship in that the provincial system broadly disappointed again, albeit it did leave us with the four best teams in the country. And from there, I suppose most of us presumed on a certain hierarchy kicking in.

A presumption that made us fools.

Both semi-finals were outstanding contests that left us with maybe surprising but utterly deserving winners. It seems to me that Mayo especially defy every rule in the book, bouncing back endlessly whenever you start thinking they’ve maybe run out of road.

We’ve all written the Mayo obituary multiple times at this stage, yet here they are back in another All-Ireland final with a team hardwired with renewed energy and hunger. A team with new blood but the familiar hard-edge of old too.

I mean, apart from the likes of Rob Hennelly, Lee Keegan, Aidan O’Shea and Kevin McLoughlin, these Mayo fellas actually don’t have a lot of miles on the clock. Which means they’re not carrying much baggage.

And that’s a trap I suspect people keep falling into here, maybe because James Horan is still manager. The trap of painting them as a group still trying to step out from under some great historical cloud.

When I see them play, I don’t see too many psychological scars weighing down men like Matthew Ruane or Tommy Conroy or Ryan O’Donoghue.

I see a fearlessness there, an indifference to the past.

It was all too easy to imagine that this season would prove just one long drum-roll towards a Dublin-Kerry final. That’s what most of us expected. But what we’ve seen is an exploration of more than simply starting 15s. We’ve seen an exploration of squad strength, management and backroom depth too.

And working off all those metrics, I’d argue that these are now the best two squads in Ireland.

What really impresses me about both Tyrone and Mayo is the match adjustments they make, the game-specific tactics. There is never the sense of either standing still, or leaving the engine idle.

The old way, the way I was used to as a player, was to essentially set up the same way, irrespective of the opposition. That’s not the case now. Look at Tyrone in Ulster, using Frank Burns so efficiently as a sweeper.

Against Kerry? They just went man-on-man.

The cliché being recycled about them earlier in the season was that they’d panicked and gone back to the Mickey Harte model. But that was never the case. They’ve clearly been trying to transition their play faster, but their use of the ball was so poor during that National League hiding in Killarney, they effectively made heroes of the Kerry full-back line.

Yet, even then, you could see subtle changes in Tyrone. A desire to be more progressive in how they attacked.

As I see it, what Tyrone have always stood for is solid defence and a sharp counter. But you can see they’re trying, to develop that further too, to identify direct outlets through the likes of Darren McCurry, Mattie Donnelly or Conor McKenna.

While Tyrone named an unchanged team earlier, given the impact off the bench against Kerry of Cathal McShane and Darragh Canavan, my view is they should start the latter because, though McShane delivered a hugely impressive 1-3 off the bench, I thought Canavan actually looked more game-ready.

One thing I love, in anticipation of Saturday’s game, is that I see it as a battle between two teams carrying chips on the shoulder. They’ll both play right on the edge. As a rivalry, there’s no real history between these counties, but I don’t doubt they’ll both now see something of themselves on the far side of the ring.

The romantic vote will, obviously, be with Mayo.

But just think what an achievement this would be by Tyrone should they pull this off? A year ago, I don’t think anybody, either inside or outside the county, saw them as potential All-Ireland champions. My view was that it would take at least two years for Feargal Logan and Brian Dooher to put their stamp on things.

So they deserve huge credit for getting to the final inside a year.

Tyrone’s man-marking against Kerry was incredible, their hunger all over the pitch just too intense for Peter Keane’s side. But let’s be very clear about something here.

Both of these finalists have flaws. Look at Mayo’s opening halves against both Galway and Dublin. Abysmal. Tyrone have been similarly inconsistent with that game in Killarney just an abject humiliation.

I think both are teams that need to play at maximum intensity to be effective. When at less than that, they become very ordinary.

Put it this way, both Kerry and Dublin had the winning of those semi-finals despite significantly under-performing. For both of Saturday’s management teams, that has to be a warning.

As disappointing as Kerry were in the semi-final, they did cause Tyrone trouble when they ran at them. Now I believe Mayo’s running game to be far superior to Kerry’s, specifically through the likes of Pádraig O’Hora, Keegan, Stephen Coen and Paddy Durcan. I also happen to believe that Mayo’s midfield will attack more than Kerry’s did.

But it’s Mayo’s work rate all around the field that could be their biggest asset here.

Go rewind that semi-final against Dublin and look at the number of tackles put in by fellas like Conroy and O’Donoghue. Off the charts. And I hope that whoever is in charge of Kerry next year was paying attention to that. Because, my God, the honesty of effort shown was just incredible.

That honesty is one of the reasons, I believe, that Cillian O’Connor’s absence hasn’t impacted more starkly.

Now you can argue that Tyrone will match it and I don’t for a second doubt that they will. But Kerry turned over Tyrone in possession more often than can have been comfortable for Logan and Dooher. And they cracked Niall Morgan’s kick-outs too.

Kerry’s problem was they conceded 2-9 from turnovers. That effectively sealed their fate.

All of which suggests to me that Tyrone might need something different up their sleeves here. The advantages their work rate won them against Kerry won’t be attainable against a ravenous Mayo.

Because when it comes to hunger, this game strikes me as a dead heat.

So who wins and how? The early positioning of Aidan O’Shea on the edge of the ‘square’ against Dublin seems to have been roundly deemed a failure. I disagree. I don’t think Mayo put the ball into O’Shea nearly as often as they should.

They were too conservative, too wary of getting caught on the counter.

It meant they were neither one thing nor the other in that first half, a team that essentially froze. To my mind, if Horan sets a proper blockade across the middle third, it simply has to be worth having O’Shea on the edge of the ‘square’ whenever they force a turnover.

But you’ve got to look for him. If you don’t, one of your best tacklers is essentially left redundant by being stranded inside.

In other words, if you play O’Shea at number 14, commit to using him. Tyrone have brilliant man-markers, like Conor Meyler and Kieran McGeary, but if the quality of the ball going in is good enough, there’s nobody able to mark O’Shea.

Watching that semi-final back again this week, he could very easily have scored 0-4 despite so little ball going in. Mark my words, if given the ammunition, O’Shea could cause chaos. And imagine what an early Aidan O’Shea goal would do for Mayo tomorrow?

For me, Horan needs to mix it up, keep Tyrone guessing.

That said, maybe the uniqueness of this game is the potentially complicated match-ups. Because, on some level, the temptation must almost be to start matching backs against backs. In other words, do Mayo try to mark the likes of Meyler and McGeary and Pádraig Hampsey? That’s what I mean about modern preparation having to be game-specific. The old ways are no longer tenable.

That’s what makes this game so hard to read and, also, what I believe will make it very tricky to referee because this is all about the unorthodox. With both teams playing a running game, the middle third of the pitch looks set to be an absolute war zone. And, trust me, neither team needs any tuition in the dark arts.

Unlike in Harte’s time, today’s Tyrone don’t wait until you get to their ‘45’ to put in the hit, they’re getting the collisions in early, meaning the quality of delivery from outside tends to be hurried and poor.

Maybe the nightmare scenario for Mayo is that, with both Dublin and Kerry out of the way, they find Tyrone in their faces now with ten minutes to go. Maybe that’s when the weight of that 70-year gap might start to prey on even the young players.

But this Mayo side showed something in their comeback against Dublin that I honestly didn’t think they had in them.

The romantic story is that they do this, but of course, Tyrone will bristle at that very sentence because romance is essentially what you make it. They haven’t won an All-Ireland since 2008 and, for them, that’ll feel a lifetime too.

But I just detect something a little different about Mayo this time, something incorrigible. They’ll meet Tyrone’s ferocity in the middle third, so I’m going for them to bridge that gap to ’51. But, remember, any verdict is based on tiny fractions here.

So, for God’s sake, don’t go backing it with the contents of your pocket. The picture might be clearer for the replay!