US President Joe Biden delivered an urgent call for new restrictions on firearms after a gunman shot and killed at least 19 children at a Texas elementary school.

It came as names of those killed during the attack were beginning to emerge.

Fourth-grade teacher Eva Mireles was remembered as a loving mother and wife.

“She was adventurous. I would definitely say those wonderful things about her. She is definitely going to be very missed,” said 44-year-old relative Amber Ybarra, of San Antonio.

Ms Mireles, who was trained in bilingual and special education, worked at Robb Elementary School, where a teenager killed them all in a hail of gunfire before being killed himself by police officers.

"My beautiful cousin. Such a devastating day for us all. My heart is shattered into a million pieces," Arizmendi Mireles said.

In a short biography posted on the school district's website, Mireles had written she had "a supportive, fun, and loving family" comprised of her husband, her college graduate daughter, and "three furry friends."

Her husband, Ruben Ruiz, is a police officer at the school district's police force, the agency investigating the massacre.

Her aunt, Lydia Martinez Delgado, grieved for her niece in a Facebook post, asking for prayers for her family and the entire town of Uvalde.

The community, about 80 miles (130 km) west of San Antonio, has about 16,000 residents, nearly 80pc of them Hispanic or Latino, according to US Census data.

"I'm furious that these shootings continue. These children are innocent. Rifles should not be easily available to all. This is my hometown, a small community of less than 20,000. I never imagined this would happen to especially loved ones," Martinez Delgado said in a statement.

"All we can do is pray hard for our country, state, schools, and especially the families of all," the statement said.

Biden spoke Tuesday night from the White House barely an hour after returning from a five-day trip to Asia that was bracketed by mass shootings in the US.

He pleaded for action to address gun violence after years of failure — and bitterly blamed firearm manufacturers and their supporters for blocking legislation in Washington.

'“When in God’s name are we going to stand up to the gun lobby?" Biden said with emotion. “Why are we willing to live with this carnage? Why do we keep letting this happen?"

With first lady Jill Biden standing by his side in the Roosevelt Room, the president, who has suffered the loss of two of his own children — though not to gun violence — spoke in visceral terms about the grief of the loved ones of the victims and the pain that will endure for the students who survived.

“To lose a child is like having a piece of your soul ripped away,” Biden said.

“There’s a hollowness in your chest. You feel like you’re being sucked into it and never going to be able to get out.”

He called on the nation to hold the victims and families in prayer — but also to work harder to prevent the next tragedy.

“It’s time we turned this pain into action," he said.

At least 19 students were killed at Robb Elementary School in the heavily Latino town of Uvalde, Texas, according to local officials.

It was just a week earlier that Biden, on the eve of his overseas trip, travelled to Buffalo to meet with victims' families after a racist, hate-filled shooter killed 10 Black people at a grocery store in Buffalo, New York.

The back-to-back tragedies served as sobering reminders of the frequency and brutality of an American epidemic of mass gun violence.

“These kinds of mass shootings rarely happen anywhere else in the world," Biden said, reflecting that other nations have people filled with hate or with mental health issues but no other industrialized nation experiences gun violence at the level of the US.

It was much too early to tell if the latest violent outbreak could break the political logjam around tightening the nation's gun laws, after so many others — including the 2012 shooting at Sandy Hook Elementary School in Newtown, Connecticut that killed 26, including 20 children — have failed.

“The idea that an 18-year-old kid can walk into a gun store and buy two assault weapons is just wrong," Biden said.

He has previously called for a ban on assault-style weapons, as well as tougher federal background check requirements and “red flag” laws that are meant to keep guns out of the hands of those with mental health problems.

Biden was somber when he returned to the White House, having been briefed on the shooting on Air Force One.

Shortly before landing in Washington, he spoke with Texas Gov Greg Abbott and offered “any and all assistance” needed, the White House said.

He directed that American flags be flown at half-staff through sunset Saturday in honour of the victims in Texas.

His aides, some of whom had just returned from Asia with the president, gathered to watch Biden’s speech on televisions in the West Wing.

“I’d hoped when I became president I would not have to do this, again," he said. "Another massacre.”

In a stark reminder of the issue's divisiveness, Biden's call for gun measures was booed at a campaign event in Georgia hosted by Herschel Walker, who won the Republican nomination for US Senate.

Speaking at an Asian Pacific American event that was intended to celebrate Biden's Asia trip, Vice President Kamala Harris said earlier that people normally declare in moments like this, “our hearts break — but our hearts keep getting broken ... and our broken hearts are nothing compared to the broken hearts of those families.”

“We have to have the courage to take action ... to ensure something like this never happens again,” she said.

Echoing Biden's call, former president Barack Obama, who has called the day of the Sandy Hook shooting the darkest of his administration, said, “It’s long past time for action, any kind of action."

“Michelle and I grieve with the families in Uvalde, who are experiencing pain no one should have to bear,” he said in a statement.

“We’re also angry for them. Nearly 10 years after Sandy Hook—and 10 days after Buffalo—our country is paralyzed, not by fear, but by a gun lobby and a political party that have shown no willingness to act in any way that might help prevent these tragedies.”

Congress has been unable to pass substantial gun violence legislation ever since the bipartisan effort to strengthen background checks on firearm purchases collapsed in the aftermath of the 2012 shooting.

Despite months of work, a bill that was backed by a majority of senators, fell to a filibuster — unable to to overcome the 60-vote threshold needed to advance.

In impassioned remarks on the Senate floor Tuesday, Sen. Chris Murphy, D-Conn., who represented Newton, Connecticut, in the House at the time of the Sandy Hook massacre, asked his colleagues why they even bother running for office if they’re going to stand by and do nothing.

“I’m here on this floor to beg — to literally get down on my hands and knees — to beg my colleagues,” he said.

Murphy said he was planning to reach out to Texas Republican Senator John Cornyn after the two had teamed on an earlier background check bill that never became law.

He said he would also reach out to Texas’ other Republican Senator Ted Cruz.

Cornyn told reporters he was on his way to Texas and would talk with them later. Cruz issued a statement calling it “a dark day. We’re all completely sickened and heartbroken.” 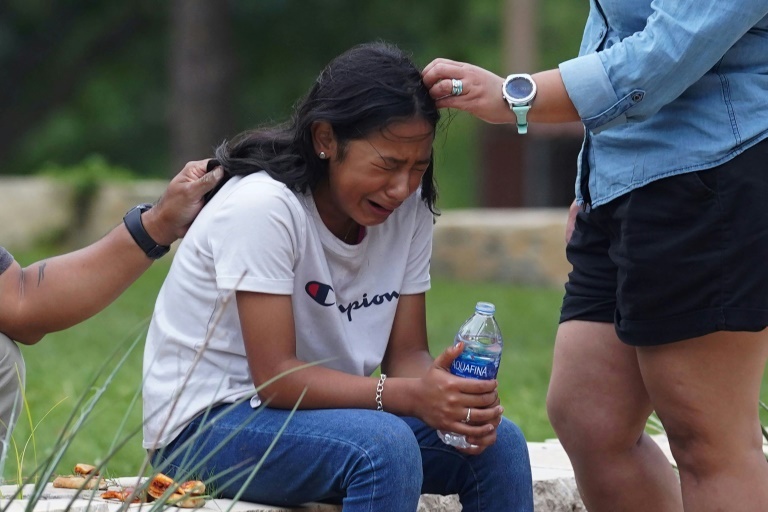 The Guardian - UK
Texas school shooting: what we know so far