‘Everybody asked, why wouldn’t you go to Australia? Today answers that’ – Tyrone hero Cathal McShane 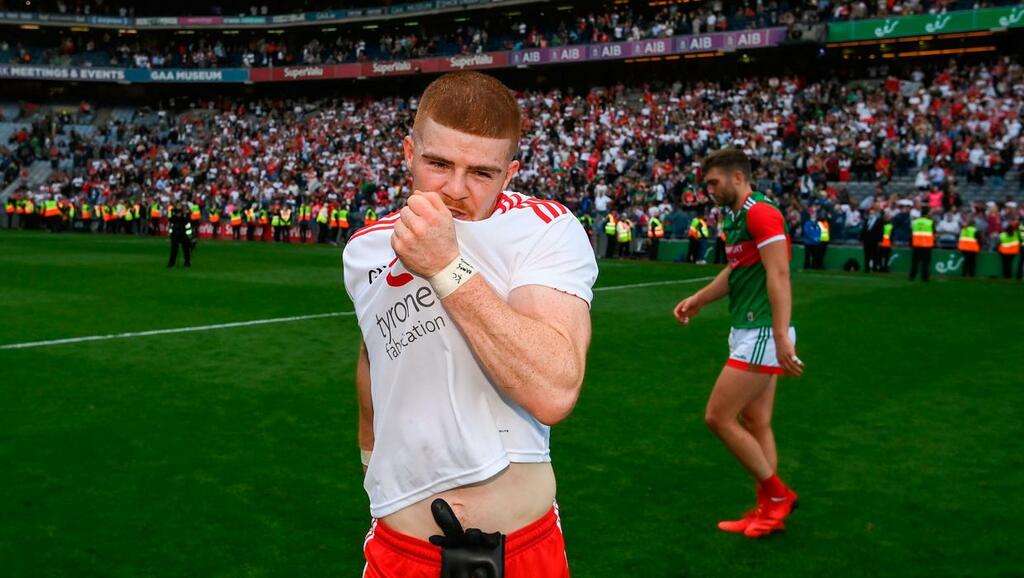 “It is a big decision to relocate to the other side of the world and pursue a professional career in a different sport. Ultimately, this was not something that Cathal was ready for and we wish him the very best in his endeavours both on and off the field.” Justin Reid of the Adelaide Crows February 2020

When it came down to it in February of last year, Cathal McShane opted to stick instead of twist. The Adelaide Crows offered a chance at life as a professional sportsman and a more sympathetic climate. It was a decision that could have sent his life off in a very different orbit, a sliding-doors moment for both McShane and Tyrone.

Had he left, Tyrone could make the case that two of their most vaunted talents had been lured away by the AFL, with Conor McKenna then operating in Melbourne. But as it turned out, McShane stayed and McKenna returned home. It helped to create the perfect storm. One man scored a goal, and the other made one. The decisions of both men to throw their lot in with Tyrone vindicated.

“Everybody asked me the question, why wouldn’t you go to Australia?” McShane reflected afterwards.

“Why do you want to stay with Tyrone? I think today answers that question. This is what it’s all about, this is what I grew up in my club Eoghan Roes dreaming of, winning Sam Maguire. Watching Peter Canavan, Brian Dooher lift Sam Maguire, that’s just the icing on the cake really today, just to get over the line and make sure Sam is coming back to Tyrone.”

It has been anything but straightforward for McShane since. He had his breakout season in 2019 when he finished as the championship’s top scorer and won an All-Star. But not long after he confirmed his decision to stay at home, he suffered a freak ankle injury, landing after going for a ball in a league clash against Galway, one that would leave him out of the action for a lengthy period.

“It was a very bad injury. Whenever I did the research and got the full diagnosis, the chances of doing that kind of injury was one or two per cent – it’s very rare. At the start, we thought it mightn’t be too bad, but it worsened. Listen, that’s the past, we just look forward now. I’ve worked really hard. I think I’ve shown out there (that) I’m more than capable. It’s just a matter of getting more minutes. I’ll be glad to go back to the club in a few weeks and build with them.”

For a period during lockdown, McShane couldn’t get physio on his injured ankle due to restrictions. It made an already complex recovery even more difficult.

“That’s it, there were many dark days over lockdown. Even being in the gym myself at home, being in five or 10 minutes and realising this isn’t going to work . . . there’s a lot of emotion that comes with it.

“I got great help with physios, I can’t be thankful enough. They’ve really helped me and driven me on. My family, my friends, my girlfriend, they’ve all helped. I’m really proud of myself to have got back to where I’ve got to now. And there’s no stopping, you just keep going and keep building.

Injury meant he had to be content with coming off the bench for Tyrone this year. On Saturday, he delivered a crucial goal with his first touch, something he says Tyrone had developed in training.

“Again, you’re probably changing your game and maybe that mentality of starting a game. Suddenly coming out of the warm-up, you’re straight into it. You’re on a high, you’re just in the game and everything’s go, go, go. But, obviously, as a sub, you have to come off and maybe chill out again and relax and just prepare yourself mentally for the battle and when you’re needed. I kind of had a good insight into when I would be needed today. Again it was going to be early, so I prepared well for that. I guess whenever coming on, there’s no better feeling than sticking it in the net straight away.

“You’re just coming on and you’re trying to make an impact straight away. The move that actually happened, we’ve worked on. It’s not just a fluke, or whatever. We try to make the most of the opportunity that arises, and thankfully, the ball rattled the net. So I was delighted.”

For Mattie Donnelly, Saturday’s result was the product of a lifetime’s pursuit. In the Tyrone team, only Peter Harte outstrips the Trillick man in terms of longevity and championship appearances in the Tyrone squad.

And it offered redemption of sorts for the 2018 final defeat when Donnelly was captain.

“I think the moments on the pitch afterwards just caught you by surprise when you see your brother, your club-mates, the boys that you have been in the doldrums with for 10, 12 years now.

“Even Petey Harte, been on the go with that man since he was 15/16 and just to share the day and validate all the work we have done. It was just emotional and it just makes it all worthwhile.

“Since we (first) laced the boots up that’s what I said to the boys. This isn’t a thing since last October, it’s since we all laced our boots up.

“It’s all come together and it’s cultivated this.

“Even when I started in the senior squad, you are looking in front of you, looking behind you, to see what’s coming, and you just knew when them boys were coming, you know, every one meant to be there was in that changing room today.