This was the first home game of Leinster’s 2022/’23 season, but most of the talk at the RDS had already switched to next season.

It’s not yet confirmed, but Stuart Lancaster’s move to Racing 92 at the end of the campaign dominated the build-up to this game, and as the home team strolled to a comfortable victory over an unimpressive Benetton side, thoughts were already turning to what the province will do next.

Racing are convinced enough of Lancaster’s talents to offer him a four-year deal – reportedly signed on Thursday – and while Leinster were far from perfect last night, they looked a well-drilled, well-prepared side, as they almost always do.

The show will go on, of course, and for Leo Cullen, there’s some succession planning to do, but for Lancaster and the players, there is still a season to consider and two trophies to be won.

This display won’t feature much in the season review, but by re-introducing a raft of internationals, they improved on last week’s display ahead of next week’s trip to Ulster.

Ciarán Frawley’s time in the No 10 jersey lasted 44 minutes and he was treated for a shoulder issue before checking out.

That will alarm the Ireland set-up, with the Skerries native due in South Africa with Emerging Ireland tomorrow.

Although Dan Sheehan scored four tries, perhaps the most notable performance was that of Jason Jenkins, who built on a promising debut in Parma with a powerful display here.

Recruited from Munster where he had an injury-disrupted season, the big South African looks like he could give Leinster a new dimension.

He was combative in the air and destructive on the ground alongside Ross Molony, who came in late for James Ryan after he limped out with a hamstring issue.

The other note of concern surrounds Caelan Doris, who was replaced with a head injury early in the game. Considering his history of concussions, the No 8 will be closely monitored.

Otherwise, this was a more comfortable evening than their opening day outing when they scored and conceded five tries in a narrow win.

This time, the Italian opposition only managed one as the Leinster reinforcements did their job in a six-try success. In preparation, Benetton would have no doubt stressed the importance of discipline and keeping things tight for as long as possible, but that was out the window after six minutes when Mattia Bellini couldn’t resist a tug on Dave Kearney’s shirt as Doris looked to find the winger.

A quick review and Jaco Peyper reached for the yellow card, and as Bellini found his seat in the Anglesea Stand, Sheehan joined the back of a maul and powered over for his side’s first try.

Frawley delivered a difficult conversion and his next effort was far easier as Sheehan crossed again after 16 minutes, punishing some lax defending after Michael Ala’alatoa had won a scrum penalty, and from the lineout, the home side had carried strongly three times before the hooker stepped back inside.

Again, Frawley converted, and while Giacomo De Re pulled three points back for the visitors after Andrew Porter was punished at scrum-time, Sheehan completed his hat-trick after 28 minutes as the Leinster maul proved too strong for the Italians.

Frawley again converted and might have been lining up another, but for an Ala’alatoa knock-on after Josh van der Flier brilliantly released Jimmy O’Brien and found the superb Jenkins on his shoulder.

The Samoan prop couldn’t hold the pass, but we’d already passed the point where mistakes were going to cost Leinster.

No doubt Monday’s video review will highlight their final trip to the ‘22’ before half-time when they got within inches of the line and came away with nothing, but as they retreated to the dressing room at the break, they were content with their 21-3 lead.

Within seven minutes of the restart, they’d secured a bonus point, with Ross Byrne coming in for Frawley and injecting pace into the attack.

His pass found Jordan Larmour and he cleverly found the flanker on the wing.

Byrne nailed the touchline conversion with ease and repeated the trick from the other side as Sheehan crossed for his fourth after another dominant maul in his final act of the night.

The largest cheer of the night was reserved for the introduction of Cian Healy on his 250th Leinster appearance, but the prop found himself under the sticks minutes later as Benetton replacement scrum-half Manfredi Albanese scooted in for a consolation try as the hosts fell asleep.

Garry Ringrose thought he’d scored only for the television match official Ian Davies to spot Luke McGrath had put a foot in touch before finding his captain.

McGrath made up for it by darting over for his side’s sixth try from another dominant maul and that was that. 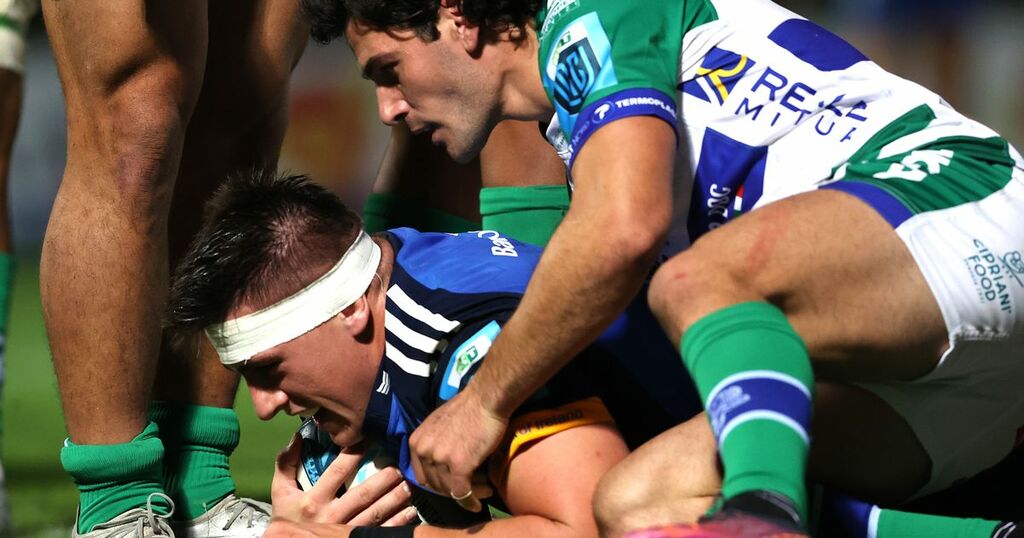 Ciaran Frawley’s stock continues to soar in the No 10 markets. Leo Cullen’s decision to pick him at out-half before…

LEO CULLEN says Ciaran Frawley will be assessed before travelling to South Africa with Emerging Ireland on Sunday.