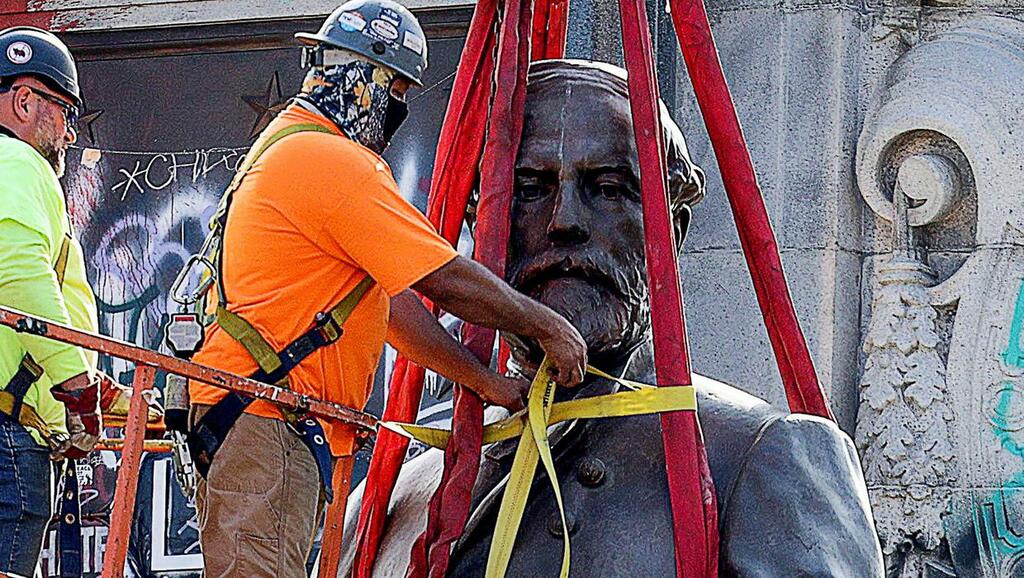 Roughly an hour after workers tied straps around a 12-tonne statue of Robert E Lee, a crowd gathered at the pedestal in Richmond, Virginia.

They cheered and sang as the 131-year-old monument to the Confederate general – central to Civil War mythology and Lost Cause iconography – was brought to the ground.

The scene in Virginia, once the capital of the Confederacy that fought to preserve slavery, marks a watershed moment in the latest push to remove statues of slaveholders and Confederate figures from public view following a summer of racial justice protests last year and a wave of statue removals across the US.

The city’s street best known for its icons of white power no longer features any.

Virginia Governor Ralph Northam announced plans to remove the Lee statue – the largest, still-standing Confederate statue in the country – on June 4 last year, and the state’s Supreme Court sided with the decision after it was challenged, paving the way for construction crews in cherry-pickers to lift the statue from its pedestal.

Crews then began sawing it into pieces to transport it to storage.

Mr Northam said removing the towering statue – a six-story bronze figure first erected in 1890 – “is an important step in showing who we are and what we value as a commonwealth. The public monuments reflect the story we choose to tell about who we are as a people”, he said in a statement yesterday.

“It is time to display history as history, and use the public memorials to honour the full and inclusive truth of who we are today and in the future.”

Richmond Mayor Levar Stoney said: “Richmond is no longer the capital of the Confederacy.

“We are a diverse, open and welcoming city and our symbols need to reflect this reality.”

The giant stone base on which the statue sat will remain in place, although the plaques around it commemorating General Lee will also be removed.

State politicians are also commissioning the Virginia Museum of Fine Arts to survey experts and members of the public to draw up a new vision for Monuments Avenue.

Following decades of att- empts to remove statues of Confederate figures from public spaces after their construction in the years following the Civil War during the Jim Crow era, demonstrators and state and local officials across the US revived their push last year.

On June 29, the US House of Representatives voted to move statues of Confederate figures from the US Capitol.