We seem as far away from Sam as we ever were 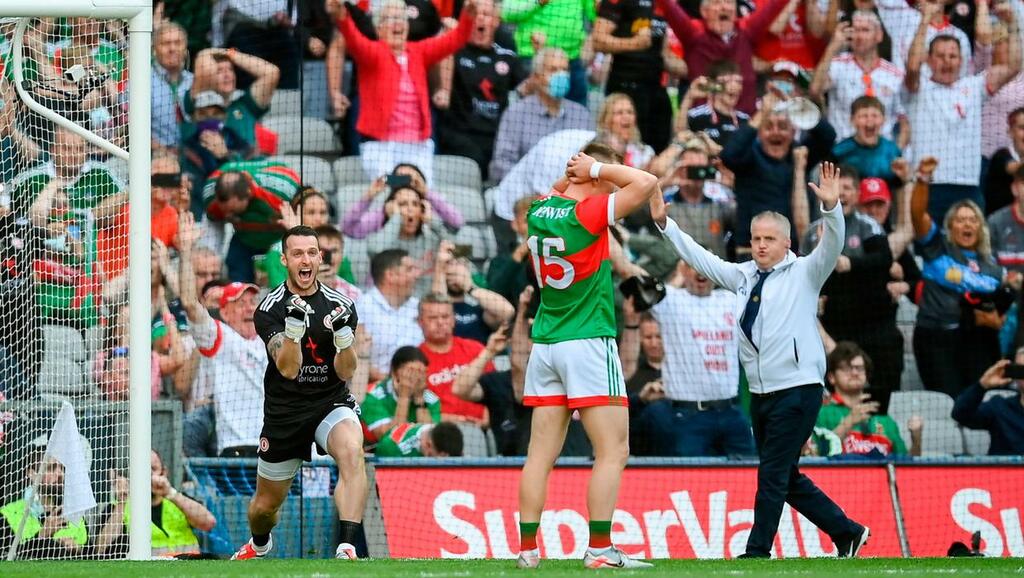 Talking to Mayo fans while walking out of Croke Park on Saturday, there was a clear feeling among them: we seem as far away now as we ever were. Yet another painful defeat, but James Horan and his men have no choice but to pick themselves up in a few months and go again.

What direction do they need to take from here?

The final holds lots of clues. To go that extra step, their forward structure needs to improve, along with the overall strength of their bench.

I was sitting with ‘Gooch’ Cooper during the game and in that second half, he asked: “Who can come on now and change the game?” To be honest, I couldn’t see anyone do that for Mayo in the same way Darragh Canavan and Cathal McShane could for Tyrone.

Our subs didn’t add much at all: Enda Hession came on early and didn’t have the impact he had against the Dubs, unable to get the running game going, while Jordan Flynn and Darren Coen also didn’t make much difference.

Outside of Cillian O’Connor and Tommy Conroy, who’ll get there in time, we lack the extra one or two forwards of truly top quality. To get across the line at this level, Mayo need to unearth a lot more talent, but that takes time.

On Saturday, they lacked leadership in their forward half. The Tyrone defence went after Mayo’s experienced guys, like Aidan O’Shea and Kevin McLoughlin, cutting them down, and while our younger guys tried very hard, they just weren’t at the level needed. Outside of Lee Keegan and Stephen Coen, who had an excellent second half, our leaders were seldom seen.

Mayo struggled with composure in front of goal. Obvious not just from the wides, but the hesitancy about whether to shoot or hold the ball. The decision-making in the forward half was poor throughout and in the end, it came back to kill them. Against Tyrone, you simply have to take your opportunities.

The better team undoubtedly won, but Mayo spurned a lot of goal chances. The penalty and Aidan O’Shea’s chance were two they really should have nailed, along with Conroy’s. When you have chances like that in a final, you need to take one or two. Mayo took none.

A lot of our bigger stars got beaten in their match-ups. I wrote before the game that midfield was an area Mayo could dominate, but they were dominated there due to the outstanding work from Conn Kilpatrick and Brian Kennedy.

Matthew Ruane was a huge target for Tyrone, and as a result, he never got going, man-marked out of it for most of the game. He couldn’t get on the ball and drive forward the way he normally does. He was stifled. Kilpatrick did an amazing job on him and Kennedy, too, was excellent.

Conor Loftus did well going forward, but he was one of those lacking clear decision-making, kicking two bad wides at a critical time when the game was in the balance. We spoke before about how Mayo would miss Cillian O’Connor and they really did feel his absence.

That’s not to take away from Ryan O’Donoghue, who did very well, worked extremely hard and shouldered a lot of responsibility, but there were stages with frees from far out where he hadn’t the capability required. For overall leadership and experience, for attacking cuteness and guile, Mayo badly needed Cillian on that pitch.

The lack of composure up front gave lots of fuel for critics who believe Mayo don’t have what it takes upstairs to get it done, but it’s hard to know unless you’re in their camp how much of their performance was psychological.

When you haven’t got over the line on the big day before, that nervous tension has to come in when you’re coming down the home straight if things are tight. I think it did on Saturday, at least to an extent.

With 10 or 15 minutes left, Mayo still had opportunities to win, but you always felt Tyrone were going to hold out.

Mayo’s mindset by then seemed to shift. It wasn’t that they’d given up, but they’d done all the hard work to grind Tyrone down, get the ball up to that final quarter but came undone due to poor shooting and a lack of composure.

They just never got that massive momentum swing they needed. Once Tyrone got to the break two points in front, we knew they’d never give that up.

The penalty was the perfect opportunity for Mayo and if they edged in front, it could have changed everything. They could expose Tyrone if they forced them on the attack and that’s when Mayo could have turned them over and got them on the counter, but Tyrone never allowed them that chance.

That was down to their players’ brilliance; they’d stars all over the pitch. I was in awe of Niall Morgan, whose goalkeeping performance deserved man of the match.

He’s elusive and can be a bit erratic, but he was the most composed man throughout. Bar his first kick-out, he didn’t put a foot wrong.

The kick passes he gave, from the ground and out of the hand, were like darts. He knew when to go long and when to go short.

Normally, when we highlight a goalkeeper on All-Ireland final day, we’re talking about a save, but he was like an extra outfield player.

Whatever the regrets Mayo hold, there’s no doubt Tyrone are deserving winners.

Huge credit should go to their management. They have a style of play that’s ever-changing, ever-adapting, and since that six-goal hammering by Kerry in the league, they changed their play and on Saturday, they’d stars who stepped up in every corner of the pitch.

They look like a team that will be back in a final again very soon, and after the season we just witnessed, one thing seems certain: it’s going to be a very interesting championship in 2022.