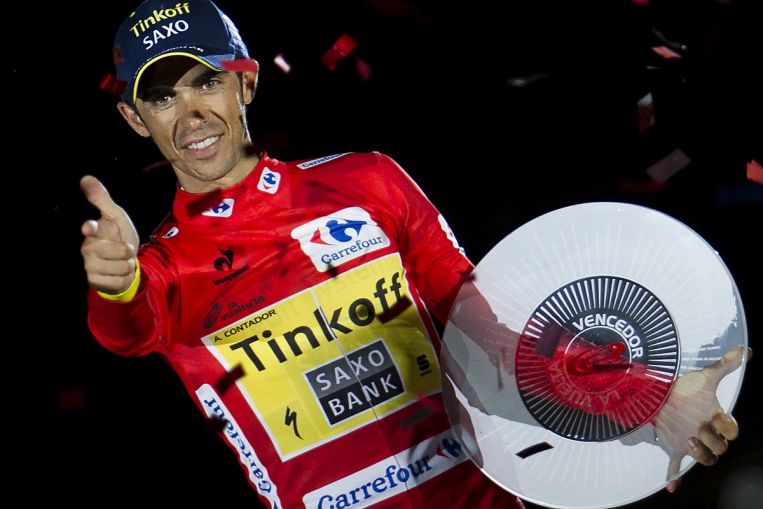 MADRID • Twice Tour de France champion Alberto Contador will hang up his helmet after this year's Vuelta a Espana, bringing to an end the career of one of the world's greatest cyclists.

The Spaniard, one of six riders to have won all three Grand Tours in a 14-year professional career marred by a doping ban, made his announcement on Instagram yesterday.

"I will participate in the next Vuelta a Espana from August 19 and that will be my last race as a professional," the 34-year-old said. "I say this happy, without sadness. It's a decision that I have thought very well and I don't think there is a better farewell than in the home race and in my country."

"I'm sure they will be three wonderful weeks."

Nicknamed El Pistolero for his attacking style and ability to mount devastating attacks in the mountains, Contador won his first Tour de France in 2007 with the Discovery Channel team before moving to Astana and winning it again in 2009. He also won the 2010 edition but in 2012 was stripped of that title after a two-year ban for testing positive for the banned substance clenbuterol at the race.

He blamed it on contaminated steak and initially had a one-year ban lifted by the Spanish cycling federation. The Court of Arbitration for Sport eventually banned him, back-dating it to January 2011 and erasing all his results from July 2010 to Feb 2012. He was also stripped of the 2011 Giro d'Italia title. Besides his Tour titles, he won the 2008 and 2015 Giros and the Vuelta in 2008, 2012 and 2014.