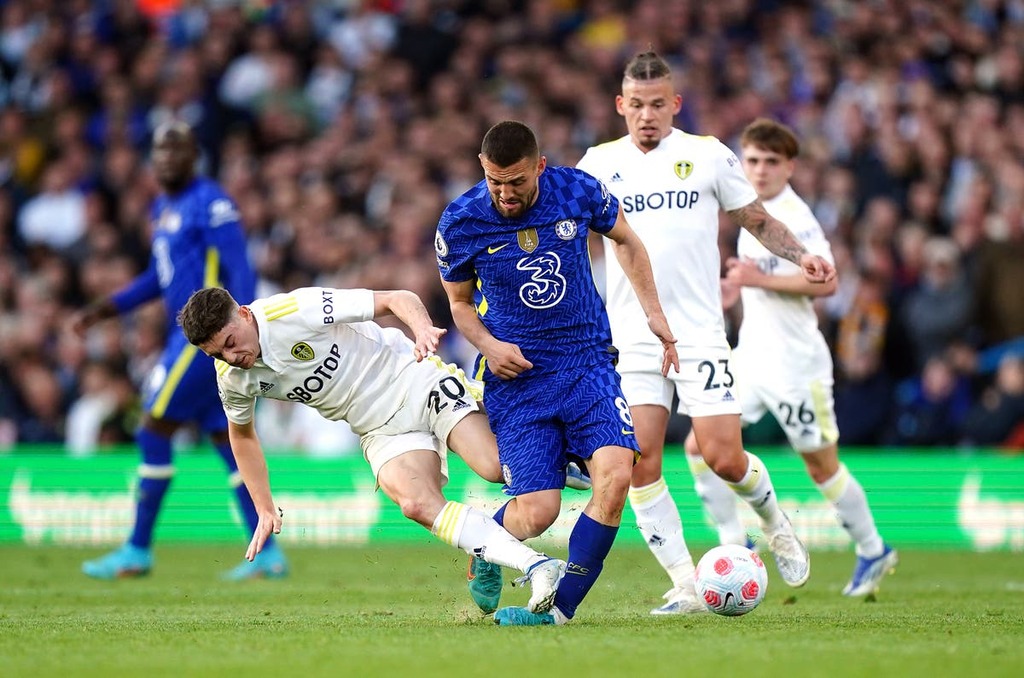 Chelsea’s Mateo Kovacic set to miss FA Cup final after Dan James challenge
Kovacic was forced off in the 30th minute with an ankle injury.

Chelsea midfielder Mateo Kovacic needs a "miracle" to be fit in time for the FA Cup final against Liverpool on Saturday after the Croatia international limped off in Wednesday's 3-0 win against Leeds United, said manager Thomas Tuchel.

Kovacic was at the receiving end of a reckless tackle from Leeds winger Dan James, who was shown a straight red card for the 24th-minute challenge.

"I tell you as a coach and not as an expert, but for me it is very unlikely he will play in the cup final," Tuchel told reporters.

"He tried to play another 15 minutes which was almost impossible, so now he has a swollen ankle and is in a lot of pain."

The 28-year-old, who also missed three games due to an ankle problem last month, has been a key player for Chelsea this season, making 43 appearances in all competitions and contributing six assists.

"If he misses it I'm very disappointed - he was a clear starter. He is super hungry and determined and (was) excited to play this match," added Tuchel.

"Of course, he is in fear now he will miss it. We will see. We need to wait. Maybe we have a miracle and we make it possible."

Mason Mount, Christian Pulisic and Romelu Lukaku were on target at Elland Road as Chelsea bounced back from a minor slump to clinch their first win in four league games.

"We needed to step up, there was a reason why we conceded goals and we did this as a team," said Tuchel. "It was nothing new that we did today but we did it on a much higher level of focus and discipline than in the last matches."

Chelsea had dropped 10 points in their previous five matches, but made light work of victory at troubled Leeds.

Tuchel added: "I felt the team were very calm, very determined and very focused before the match and they delivered a performance to which we got used to over so many weeks.

"I'm very happy and it was necessary of course, given our situation and not only because we arrive now for a big match, but it's very good to arrive for a match like Saturday with a calm mind."

Leeds' third straight defeat left them in the bottom three, level on points with Burnley who have a game in hand, and have two games left - at home against Brighton and at Brentford on the final day - to salvage a calamitous season.

Boss Jesse Marsch said James "felt terrible" about his costly 24th-minute dismissal but refused to point the finger at his player.

"One thing is for sure, I'm not going to sit here and blame anyone," the American said.

"We have to be aggressive against the ball. We have to try to win balls and sometimes now we've been a little too aggressive in certain situations and that has cost us.

"We want to be aggressive, but certainly not cross the line."

Chelsea’s Mateo Kovacic set to miss FA Cup final after Dan James challenge
Kovacic was forced off in the 30th minute with an ankle injury.