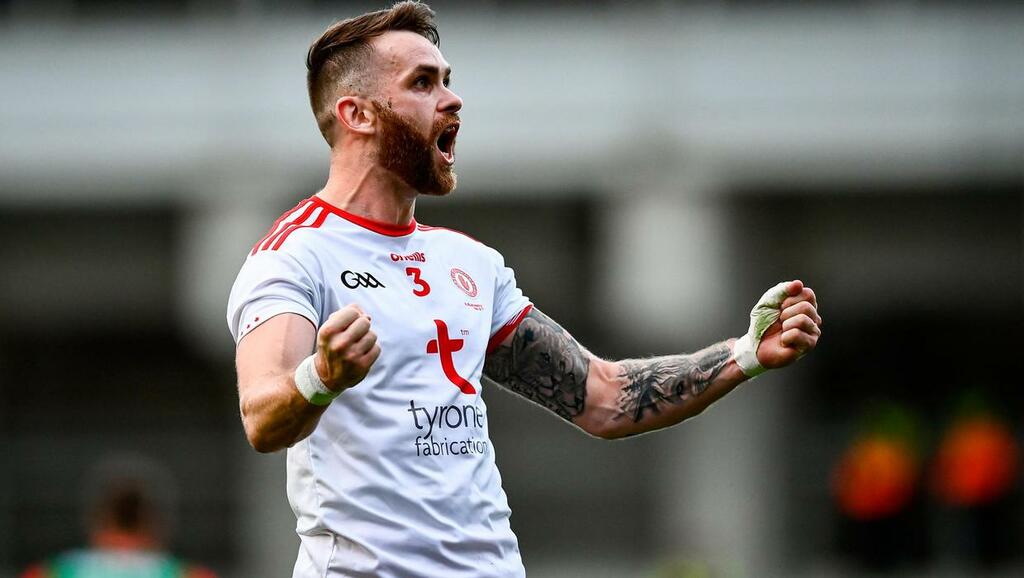 What we’ve learned from this season and yesterday’s final, is that the game of Gaelic football has changed and newly-crowned All-Ireland champions Tyrone, are responsible for the latest chapter in its evolution.

The Tyrone management have created a system where 13 of the 14 outfield players, Darren McCurry, excluded, can transition positions, backs to forwards, defenders to sweepers, midfielders to defenders, all in a rotating organised manner and with all players comfortable attacking with the ball.

Tyrone didn’t get a sweeper in place as much as they would have liked yesterday, as we saw with Mayo’s goal chances but at times Michael O’Neill, Peter Harte, Mattie Donnelly and Frank Burns filled the role. This was a result of them deciding to go man-to-man in the middle-third to stop Mayo’s running game and to tag Aidan O’Shea, Tommy Conroy and Ryan O’Donoghue.

On numerous occasions, players could be seen eyeballing their opponents and tagging their runs rather than dropping back and filling slots.

To Niall Morgan’s credit, he came to the rescue for Bryan Walsh’s goal chance in the first half and also on two other occasions when needed he came off his line to sweep behind his full-back.

With Tyrone, all the defenders were encouraged to go forward and as a result they dragged the Mayo forwards with them, up the pitch, throughout the game. But like against Kerry when the openings came Ronan McNamee, Padraig Hampsey and Michael McKernan were able to capitalise on them. They broke the lines and forced the Mayo forwards to track and mark them instead.

Tyrone’s score on seven minutes emphasised that they were all out attack from the back with McNamee spraying it to Hampsey, a picture we saw on numerous occasions against Kerry. This continued for the entire game, especially in the latter stages of the second-half, when in the past Tyrone teams would have tried to defend the lead, these players, particularly the defenders kept driving on up the field to try create more scoring opportunities.

Niall Sludden and Peter Harte are prime examples of the new type of player Tyrone have created. Sludden spent a lot of the game tracking Conor Loftus, Matthew Ruane and Diarmuid O’Connor and when Mayo had a potentially big game changing moment, he cleared the ball off the line after tracking Loftus back.

He also managed to get up the pitch for two points in the first-half along with being an integral part of Tyrone’s transition play, linking up in the middle third and diving at players boots to deny Mayo scores.

Harte linked play, swept up, marked Ryan O’Donoghue and got a vital mark.

As expected, the kick-outs were key, Tyrone learned from the Kerry game with their overload kick-out, where for majority of the time they committed seven to eight players and conceded numerous scoring opportunities to Kerry. They flipped this on its head yesterday scoring 1-3 from their long kick-out.

Yesterday, with Mayo going primarily man-to-man they isolated Brian Kennedy and Conn Kilpatrick with Kieran McGeary coming in the front for breaks and Conor McKenna coming in from the back.

Although they only managed to win two of Mayo’s kick-outs their tenacious man-to-man approach slowed Mayo’s runners down and blocked the channels which they wanted to run through.

Much of the talk before the game was focused on the turnover battle and Mayo turned over the ball 21 times with 10 inside the Tyrone 45-yard line. This gave Tyrone the platform they needed and they ended up scoring 1-6 off Mayo turnover ball.

Conor Meyler’s impact and his battle with Paddy Durcan was also the subject of much debate with many thinking Durcan could come out on top.

Durcan did get a score in the first half but that was after Meyler tracked Lee Keegan from one side of the field with Durcan drifting to the other for his only point. Meyler’s involvement in transition and link play was top notch and his sublime pass for Cathal McShane’s goal will be on rewind in Tyrone for years to come.

We saw against Kerry that Tyrone kicked the ball into their inside line less than five times. They learned from this and created two goal chances from the long ball, along with securing scores from Mattie Donnelly, Cathal McShane, Peter Harte and Darren McCurry.

In the middle sector three of Tyrone’s lesser lights came to the fore, Michael O’Neill’s tackle count, going from player to player and trying to fill the middle sector where possible along with bringing the ball and breaking lines in transition play had a huge impact on the game.

This was crucial along with both Kennedy and Kilpatrick at midfield, not only did the dominate the sky they managed to keep the searing runs of O’Connor and Ruane to a minimum.

In the vital third quarter it was Kilpatrick who tracked and turned over the ball for McShane’s goal and it was also him who won a sublime kick-out to set up the second goal for McCurry.

Before our eyes the game has changed, Tyrone have raised the bar, players must now be able to do it all.