As a Kerryman, I salute the cutest of cute hoors – Tyrone are brilliant All-Ireland champions 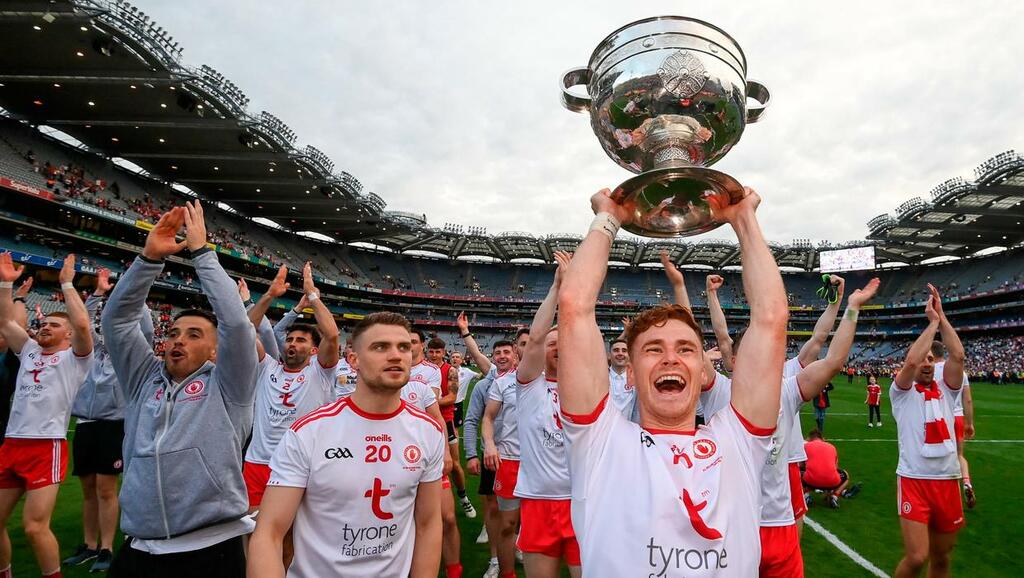 Let’s begin by saluting Tyrone – they are deserving winners of the 2021 All-Ireland football championship.

This was a brilliant final victory for them – no ifs, buts, or maybes. They were the better team from start to finish and they fully deserved their five-point victory.

And let’s finally put a end to this suggestion that I’m anti-Tyrone and didn’t want them to succeed. That’s a complete load of nonsense. But I will say this, and I mean it as a compliment. They are now the number one cute hoors. My native Kerry have been dethroned.

They had a cause two weeks ago against Kerry which they exploited, and they found another one on Saturday

The other 31 counties wanted Mayo to win, and they were hell bent on spoiling the party. And that’s precisely what they did.

The notion that goals wins matches might seem outdated in 21st century football but it’s still both accurate and relevant. They got three goals against Kerry and two on Saturday.

And while I’m on the subject of goals, they didn’t concede a goal in the semi-final or All-Ireland final.

Indeed, in five championship matches this season they conceded one goal – against Donegal. So, in a nutshell this sums up why they won their fourth All-Ireland title.

Aside from the goals issue – they have squad of skilful players who are all comfortable on the ball. But here’s the key which set them apart. Intelligence in not just defending but in identifying danger before it happens.

The two goals highlight that. Darren McCurry’s goal came from the vision, intelligence and unselfishness of Cathal McShane which created the score. He could have fisted it over the bar instead he sent a no-look pass to McCurry who buried it.

But the McShane goal showed Tyrone at their very best. First of all the long kicked ball from Conor Meyler into the danger zone – we rarely saw that during the Mickey Harte era. But here’s where the intelligence showed.

They created a mismatch, McShane on Oisín Mullin. The defender was ball-watching and McShane got goalside of him and flicked it to the net. That was their game intelligence at its best.

We are back to the Total Football concept and that’s what you got with Tyrone – all extremely competent when defending, all equally comfortable when attacking. Better still, it was brave defending. They did not hide behind a blanket or zonal system. This was man-to-man marking.

Their work-rate, composure, their strength and conditioning and the 1-1 contribution of their bench, the variety in their play when they are now adding kicking to their hand-passing – let’s give some kudos to the management team of Brian Dooher and Feargal Logan.

They got their tactics and match- ups spot on. The shackles are now off – they are playing more free-flowing football and this is a happier team. There is no talk of bans and any of that nonsense.

Here’s my two statistics provided by the RTÉ Sunday Game Live team. Tyrone got 1-7 from turnovers and the majority of those turnovers originated from Mayo’s attacking third. And they scored 1-6 directly from Niall Morgan’s kick-outs.

What do I say to Mayo? Unfortunately no trophies are handed to gallant losers. The reality is they came off second best in a brilliant match. But they have now lost 11 finals since 1989 and in seven of those losses in this decade the margin was been less than three.

I rarely quote Samuel Beckett – I doubt if he ever kicked a ball but his words sum up Mayo. ‘Ever tried. Ever failed. No matter. Try again. Fail again. Fail better’.

I can give you all the reasons why. They had 31 scoring chances and they scored 15 times and left four goals chances and a penalty behind. They had the chances but unfortunately they didn’t take them.

The difference between the two attacks is illustrated by another statistic. Mayo had 46 attacks and they got off 31 shots and as I said they scored 15 points. Tyrone had 11 fewer attacks but got rid of the ball 28 times.

Given that Cillian O’Connor contributed 53 of their scores it was inevitable that his loss would come back to haunt them. With the exception of Ryan O’Donoghue despite his penalty miss and to a lesser extent Tommy Conroy, they did not threaten the Tyrone defence.

Tyrone had leaders in abundance all over the field. But with the possible of exception of Lee Keegan, Mayo did not.

Aidan O’Shea doesn’t have the legs for this type of football any more and ran out of steam early in the second half and should have been replaced.

As a Kerryman, I salute the cutest of cute hoors. Tyrone are brilliant All-Ireland champions.

The game summed up the championship. At times it was brilliant but they was lots of poor quality football as well.

Tyrone won’t worry about that as they celebrate a famous win and a special word to Darragh Canavan who joins his father as an All-Ireland winner.

He didn’t have to wait as long as Peter for that elusive All-Ireland medal.