He ruthlessly and relentlessly went for Mikel Arteta, in the same way he has made his Tottenham Hotspur team go after Arsenal. It wasn’t quite “I will love it if we beat them”, or even his own public exchange with Jose Mourinho, but let’s be fair. It was a vintage piece of Premier League pantomime, of the type that does bring genuine drama to the competition. This is what gives edge to the games. It was so extensive and so condescending a display it could well give rise to a proper managerial feud.

This was a sketch on how to weaponise a press conference.

Conte started by noting how much Mikel Arteta had been complaining about referees and other issues, only to repeatedly mention that himself.

Second: “Because he has just started his work and I think he has to be calm and to try to continue to work. Because he's very good but to listen to a coach complain a lot of time is not good… I think that this is the advice if you want to accept the advice.

Third: "I don't see what happened on the opposite side, but I repeat he’s a really good coach and I think he can become an important coach in the future. But in six months I have listened to him complain a lot, and I think that I repeat it's only advice, nothing else - because he's very good and it's not good to complain a lot. Also because he has just started to do this job.”

Fourth: “If you remember he complained about the fixture. It is not good to complain.”

By then, of course, we’d got to the root of all this. Conte even had the audacity to say he could complain about many things after every game, given that is what many say he precisely does, and this was exactly what he was doing here. It wasn't really "you don't hear me complain". You very much could - but there was at least an implicit acknowledgement here of what this was partly about.

So much of it was wrapped up in Arsenal’s postponement of that match in January. The focused anger over it could be seen in every challenge, every block. Spurs were making a point in winning three.

It was another theme Conte kept coming back to.

"For sure, it wasn't a good situation because we were ready to play at that time and to see the game postponed in a strange way made us angry.

And again: “Arsenal were good to postpone a game in an incredible way with Covid and they only had one player with Covid. I didn’t forget this.”

Quite. Arteta will doubtless remember it. Because, for all that this encore was wrapped up in the past, more relevant is what happens next.

There is potential for a feud - and Arteta and Arsenal do aggravate a few people in the Premier League - but the wonder is whether it will have any effect on the actual season.

So much of this was after all about anger, and whether you can focus that anger.

Spurs, for their part, did focus their disquiet from that postponed fixture. It had immense effect, all the more so because Arsenal were so emotionally frantic. They responded to the penalty in a frenzied manner, with that only leading to worse decisions from their players.

It is why, even if they had fair grievance with at least two of the calls, they should most be looking to themselves.

It brought to mind Jock Stein’s team talk to his Celtic players when they were 1-0 down to a highly dubious Internazionale penalty at half-time of the 1967 European Cup final.

“If you have a grievance about the referee, there is only one bunch of people who can do anything about it: you. Go out and right it yourselves.”

Celtic did that then, winning 2-1. Arsenal did not.

There is a bigger point there, too. Arsenal can definitely dispute the decisions, and they can certainly argue that all the big calls went Spurs’ way. But it would be outlandish to deny there was not at least some ground for all of them, and particularly Rob Holding’s cards. Arteta refused to criticise his players, and the referee, but the latter was only because he doesn’t want to be suspended for a crucial game away to Newcastle United on Monday.

It is of course possible some of this is a public act, too, that means he can lambast his players in private in that vintage managerial way.

It’s just that red cards keeps happening, which means the problem hasn’t yet been fully confronted.

And that brings us back to Conte’s confrontation of a press conference.

It was clearly intended to be a huge dig at Arteta, but was it also to unsettle him, to make Arsenal be even more self-defeatingly frantic in their next match?

That remains to be seen. From Arsenal’s 11 league defeats this season before this, a massive eight have come in clusters or doubles. That is something that used to happen to Arsene Wenger teams, too. They often lost matches in pairs, and it was pointed at as something psychological. That is a worry for Arteta. If it happens this week, it will surely be goodbye to the Champions League. This may be what Conte is further leaning on.

At the same time, Arsenal have shown admirable resolve as a consequence of that, most notably in how they recently responded to three successive defeats with four consecutive wins - until this.

There’s also the reality that, for all Conte’s grandstanding - and admittedly superb big-game record - his own team are not exactly immune from such collapses.

Their biggest win of the season before this, that 3-2 victory over Manchester City, was immediately followed by the greatest low. That was the 1-0 defeat to Burnley that saw Conte so incensed that many genuinely believed he would quit.

The Italian referenced this himself, because next up? The same opposition.

“We lost against Burnley and you know very well that after this game it made me very, very angry. I think it was a good step for me, for my players, for the club to understand what I wanted of my players and now to stay in this position I think at that time, none of us could think that two games to go we would have the possibility to play for a place in the Champions League.”

It would be very modern Tottenham to beat Arsenal in a game like this and then slip, or still not make the Champions League.

But it would also be very modern Arsenal to be four points clear of fifth with three games remaining and still not make the Champions League.

It was why focus and anger - and, really, mentality - were such a theme of the night. It was also why the press conferences might, for once, have been a bit more than pieces of Premier League pantomime. 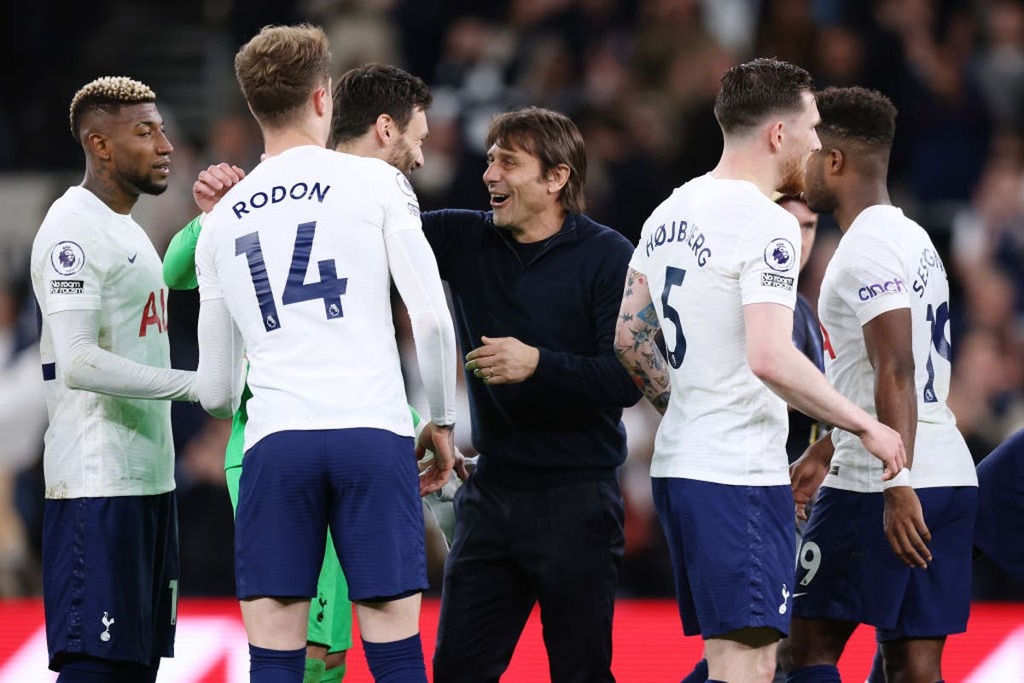