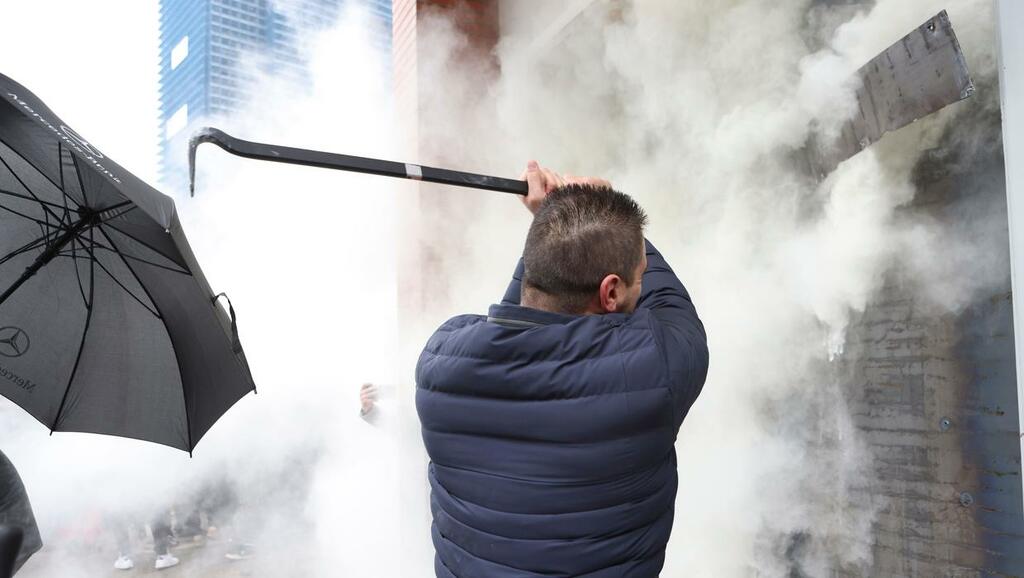 Albanian police have intervened to move away protesters who broke into the headquarters of the country’s main opposition party in an internal squabble over the party’s leadership.

Police used a water cannon truck and tear gas, and scores of officers pushed away hundreds of protesters who had stormed the ground floor of the centre-right Democratic Party’s headquarters.

They detained and removed some protesters.

A group led by former party leader Sali Berisha used iron bars and hammers to break open the main doors of the building.

Party staff used tear gas to try to prevent them breaking in before the police intervened at the party’s request.

At least one injured person was seen.

Mr Berisha is trying to remove the Democrats’ leader, Lulzim Basha, whom he accuses of being a “hostage” of Prime Minister Edi Rama of the left-wing Socialist Party.

“Today the Democrats and Albania’s democrats will turn the bunker of hostage (Lulzim) Basha into their house of freedom,” Mr Berisha said, pledging to continue the protest.

The party in a statement said that “today’s acts of violence against the Democratic Party mark Sali Berisha’s final isolation and a shameful move out of the political scene”.

Mr Basha fired Mr Berisha from the parliamentary group in September, which sparked an internal party fight between them.

That followed an intervention in May by US secretary of state Antony Blinken, who claimed in a statement that during Mr Berisha’s 2005-2013 tenure as prime minister, the politician “was involved in corrupt acts… using his power for his own benefit and to enrich his political allies and his family members”, interfering in “independent investigations, anti-corruption efforts and accountability measures”.

In December Mr Berisha’s grouping claimed to have held a referendum removing Mr Basha from his post, but the move was not recognised by the official Democratic Party.

Mr Berisha, 77, served as Albania’s prime minister from 2005 until 2013 and as president from 1992 to 1997. He was re-elected as a politician for the Democratic Party in last April’s parliamentary election.

US ambassador in Tirana Yuri Kim expressed concern at the “rising tensions” at the Democrats’ building and called on protesters “to reject violence and exercise calm”.

“Those inciting violence or undermining the rule of law will be held accountable,” she posted on Twitter.

Last month US deputy assistant secretary of state Gabriel Escobar said there would be “consequences” if the Democratic Party chose someone to be leader who had been designated persona non grata by Washington.

Mr Berisha is the fourth top Albanian official to be barred from entering the United States because of alleged involvement in corruption.