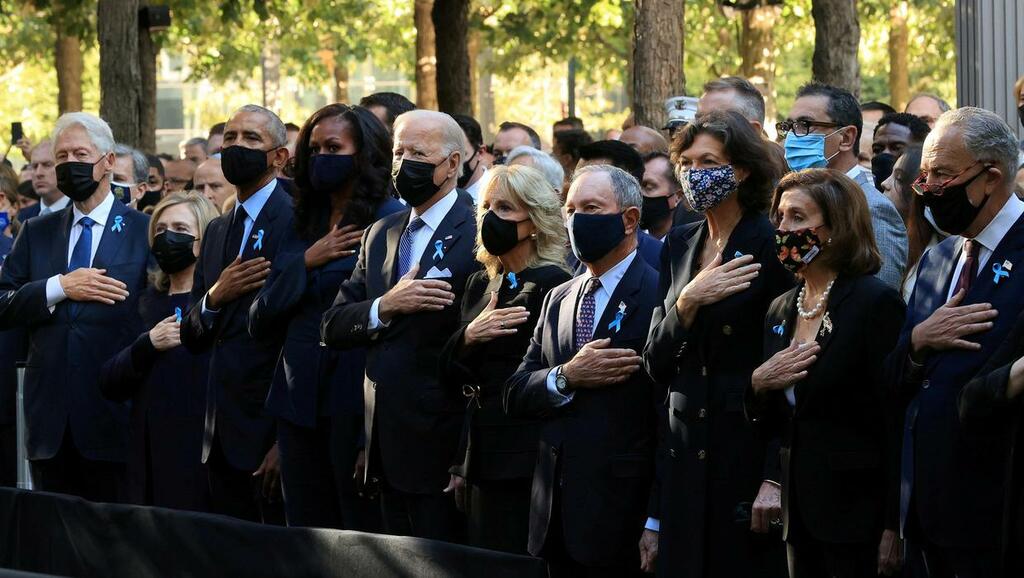 The families of 9/11’s victims held up photographs of their loved ones for Joe Biden to see.

They waved them high at the memorial at Ground Zero yesterday, some wanting the president to acknowledge the cost of American lives.

This year’s anniversary had added poignancy. Not only did it mark two decades since two planes struck the Twin Towers; it also came just weeks after America ended its war in Afghanistan in miserable circumstances.

Monica Iken-Murphy, who lost her husband Michael Iken in the World Trade Center, described it as a “heightened” anniversary for many Americans.

The silent vigils were focused on the lives taken in this tragedy 20 years ago, but also on the recent deaths of 13 troops at Kabul airport, which lingered
uncomfortably. By initially setting the Afghanistan withdrawal date to September 11, Mr Biden would have hoped for this to be a pivotal day in his presidency.

But when he toured the three sites of the attacks — New York, Shanksville in Pennsylvania and the Pentagon — yesterday he did not preside over a moment of unity. Rather he traversed a country still reeling from American failure and defeat.

The feeling was compounded by an atmosphere of division sewed deep during last year’s bitter election.

Mr Biden was a senator when hijackers commandeered four planes and carried out the attack. He was Obama’s vice president in 2011 when the United States observed the 10th anniversary of the strikes. Yesterday’s commemoration was his first as commander in chief, culminating with a stop late afternoon at the Pentagon, where the world’s mightiest military suffered an unthinkable blow to its very home.

It is now Mr Biden who shoulders the responsibility borne by his predecessors to prevent another strike. He must do that against fears of a rise in terrorism after the hasty US withdrawal from Afghanistan, the country from which the September 11 attacks were plotted.

On a day when his nation recalled its shock and sorrow, Mr Biden left the speech-making to others.

In a speech in Shanksville, George W Bush — US president when the 9/11 attacks happened —– said: “In the weeks and months following the 9/11 attacks, I was proud to lead an amazing, resilient, united people. When it comes to the unity of America, those days seem distant from our own,” he continued.

“So much of our politics has become a naked appeal to anger, fear, and resentment. That leaves us worried about our nation and our future together.”

His words may have been more aimed at Donald Trump, who was expected to commentate on a boxing event at a casino in Florida instead of standing shoulder to shoulder with all the other living US presidents.

Mr Biden chose not to speak at the memorial events, as is customary for presidents, instead releasing a pre-recorded video address to the nation the previous night — a sign, some suggested, that he was afraid of the reception he would receive.

“We saw the 9/11 generation stepping up to serve and protect in the face of terror, to show everyone seeking to do harm to America that we will hunt you down and make you pay,” he said, alluding to the US invasion of Afghanistan. “Our task (...) is to once again lead not just by the example of our power, but by the power of our example.”

For some at Ground Zero, the words rang hollow.

Events in Afghanistan were the elephant in the room during Saturday’s proceedings.

Those who did speak about it suggested Mr Biden’s insistence on drawing down troops ahead of such a poignant date turned what should be a solemn day of remembrance into a victory celebration for the terrorists. Nic Haros Jr, the son of one of the victims, Frances Haros, said the site of the World Trade Center was “holy ground” and did not think the president had a place there among the families.

‘It’s shameful for him, I think, to use this for his so-called victory lap,” said Mr Haros, whose 76-year-old mother worked on the 89th floor of the South Tower as a receptionist at an investment banking firm.

“No Joe, no victory, we are now in the Afghanistan War 2.0,” he said. “He is insensitive and he shows no compassion to the families.”

Mark Thiessen, a fellow at the American Enterprise Institute, believed the day was likely to go on to haunt Mr Biden, much like Mr Bush’s infamous 2003 “Mission Accomplished” moment did for him.

“He (Biden) pulled US forces out when he did because he wanted to use the 9/11 commemorations as a political prop — so he could bask in the glory of having ended America’s longest war by the anniversary of the attacks that necessitated it,” Mr Thiessen said.

He said that at the moment the bells rang at Ground Zero on 9/11, US citizens and allies would be “hiding from Taliban death squads because of Biden’s shameful decisions”.

Indeed, as New Yorkers bowed their heads in remembrance, the Taliban raised their flag over the Afghan presidential palace in a brief ceremony to mark the official start of work by its 33-member caretaker government.

The memorial day is usually a display of unity, where Republicans and Democrats set aside their chasmic differences to collectively grieve the lives taken in the deadliest terrorist attack on US soil.

But this year it was marred by political point-scoring and anger.

“Biden has made the 20th anniversary much more excruciating than ever before, he doesn’t belong here,” said Rudy Giuliani, who had been the mayor of New York City on 9/11. “It would be as if on 9/11, I removed the FDNY and NYPD [fire and police departments] and told the civilians to fend for themselves or get terrorists to help.” Critics noted Mr Trump’s absence, criticising the lifelong New Yorker for failing to respect the landmark anniversary.

The former president, who had set the US’s course for ending the country’s longest war, was expected to visit the site of the memorial once the ceremony finished and after Mr Biden had left the city.

In his own video message, Mr Trump said America “will struggle to recover from the embarrassment” of the withdrawal.

The tension did not go unnoticed by the families of the victims, who have become accustomed to seeing US leaders stand in unison at the annual memorial service.

“People really came together as a city and a nation for a while, but as time has gone on we’ve moved apart,” said Jim McCaffrey, who lost his firefighter brother-in-law in the Twin Towers.

Mr Biden said in his address that he saw the central lesson of 9/11 as the strength of the country’s unity.

“Unity is what makes us who we are, America at its best,” the president told the nation.

But Mr McCaffrey did not see the unified America Mr Biden spoke of.

“I’ve never seen the nation so riven, so polarised,” he said. “It’s sad that something so awful, so tragic had to happen to bring us together. I hope we don’t have to see something like that again to help us get back to that.”