What happened to President Obama's plan to reduce gun violence?

By Alan Yuhas and Nicky Woolf 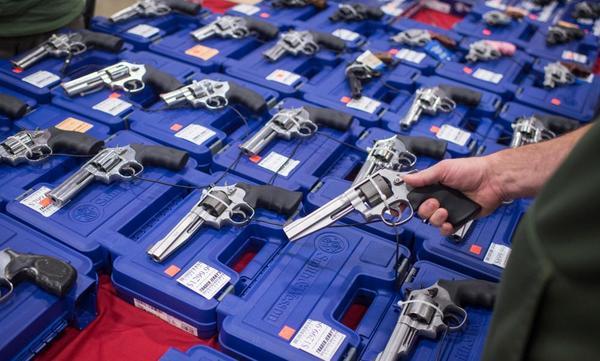 The US was rocked on Wednesday by news of the worst mass shooting event since the massacre at Sandy Hook elementary school in December 2012.

But, as Barack Obama said after the shooting at Umpqua Community College in October, the nation has fallen into a grisly routine. There is a mass shooting event roughly every day now, according to the website shootingtracker.com, which measures events where four or more people are shot. They count 353 such events so far in 2015.

On Thursday, following the attack in San Bernardino, the president renewed his call to action. But it is a refrain we’ve heard before. In the shocked aftermath of Sandy Hook, the president asked vice-president Joe Biden to lead a taskforce to evaluate what could be done. He came back with a set of concrete proposals, including four major legislative areas of change and 23 executive orders.

Currently, to buy a gun from a licensed dealer requires a background check, which includes a check against criminal records databases. A permanent record of the sale is created. But you can legally also buy a gun from a private party and never have to even show your identification. This is known as the “private sale loophole” and it includes guns bought at gun shows – such as those used in the 1999 massacre at Columbine high school. The New England Journal of Medicine, in a 2010 study, estimated that 40% of gun sales in the US fall into this loophole.
After Columbine, and again after Sandy Hook, there were calls for this loophole to be closed. This policy has widespread support: a July 2014 poll found that 92% of Americans supported universal background checks for firearm purchases. In January, Obama wrote an open letter urging private sellers to do background checks, but there’s little that executive action can really do in this area. The White House urged legislators to take action.

However, Congress had other ideas. A bipartisan amendment to the 2013 gun control bill, sponsored by senators Joe Manchin and Pat Toomey, which would have closed the gun show loophole and instituted background checks for internet sales, but not for sales between individuals outside of commercial venues, was defeated in the upper house by a vote of 54 to 46. Five Democrats voted against the bill. Four Republicans, including former presidential candidate John McCain, voted for it.

The Manchin-Toomey bill resurfaced briefly on Thursday, but was voted down again, 47-50.

A 1994 federal ban on assault weapons was allowed to expire in 2004 without much fanfare. It had always been fairly toothless; in fact, the Bushmaster XM15 rifle used in the attack at Sandy Hook had been designed specifically to circumvent that ban. Obama has said he’d support legislation which reinstated the ban – “weapons that were designed for soldiers in war theatres don’t belong on our streets”, he said at a presidential debate in 2012.

A new assault weapon ban, which would have been stronger than the 1994 ban and include high-capacity magazines, was introduced in the Senate by Dianne Feinstein in January 2013, less than a month after the massacre at the school in Newtown, Connecticut. It was defeated in the Senate 60 votes to 40. Only one Republican – Illinois’ Mark Kirk – voted for the bill, and 15 Democrats voted against it.

In the aftermath of the 2012 shooting, Obama issued a presidential memorandum ordering the Centers for Disease Control to defy Congress with work its researchers have not done in almost 20 years: study gun violence. But the health agency balked under a threat from lawmakers, who since 1996 have funded research only on the explicit condition that scientists do not study gun violence.
In recent months the president, a handful of congressional Democrats and the repentant Republican who wrote the condition have urged lawmakers to end the ban, which was inspired by NRA accusations that the CDC was publishing biased studies. Hours before the massacre in San Bernardino on Wednesday, a group of doctors presented Congress with an open letter, signed by more than 2,000 physicians, asking them to end the ban.

Some independent research continues, and the Obama administration has sought ways to circumvent the ban. The president ordered the justice department to publish an annual report on lost and stolen guns, state-by-state, and asked the National Violent Death Reporting System, a CDC branch, to collect anonymous data on the firearms used in gun deaths.

Administration lawyers have also told the CDC it can perform research on the causes of gun violence in a way that “is not prohibited by any appropriations language”, but although the agency collects data its researchers have shied from analyzing it.

“Twenty-two states and DC increased funding in both 2013 and 2014 although the overall increases are not nearly enough to make up for cuts between 2009 and 2012,” the report noted, adding that “sadly, despite much talk about the mental health crisis in America since Newtown, little of substance on mental health care has been accomplished in the sharply divided, partisan Congress in the two years that have ensued.”

Obama has authored more than 20 executive actions since 2012 in an effort to reduce gun violence, but most underscore the president’s extremely limited power over guns. His actions include an order to federal agencies to trace and share gun crime data; an order to the Department of Justice to crack down on gun traffickers and fraudulent buyers; the development of “model emergency response plans” for schools and agencies; and a letter to doctors clarifying that healthcare laws do not prevent them from asking their patients about gun safety.

He has had some support from the other branches of government. In 2013, lawmakers finally approved his nominee to run the bureau of Alcohol, Tobacco and Firearms – after seven years without a director – and in 2014 the supreme court upheld a federal ban on so-called “straw man” gun sales where a buyer with a clean record purchases weapons for someone else, rejecting the arguments of the NRA and other pro-gun rights groups.

In a 15-page plan to reduce gun violence, the administration repeatedly asks Congress to increase penalties for gun trafficking, to help pay for police and school training around the country, and to support various gun safety campaigns.

Similarly, the president’s actions also include a letter to state officials instructing them that Medicaid should cover mental health services, and a plan to “launch a national dialogue” about mental health.

But many of the executive actions remain impotent without Congress or states willing to give them time or money.