Trump Increases Rhetoric on North Korea, As His Aides Fight It Out 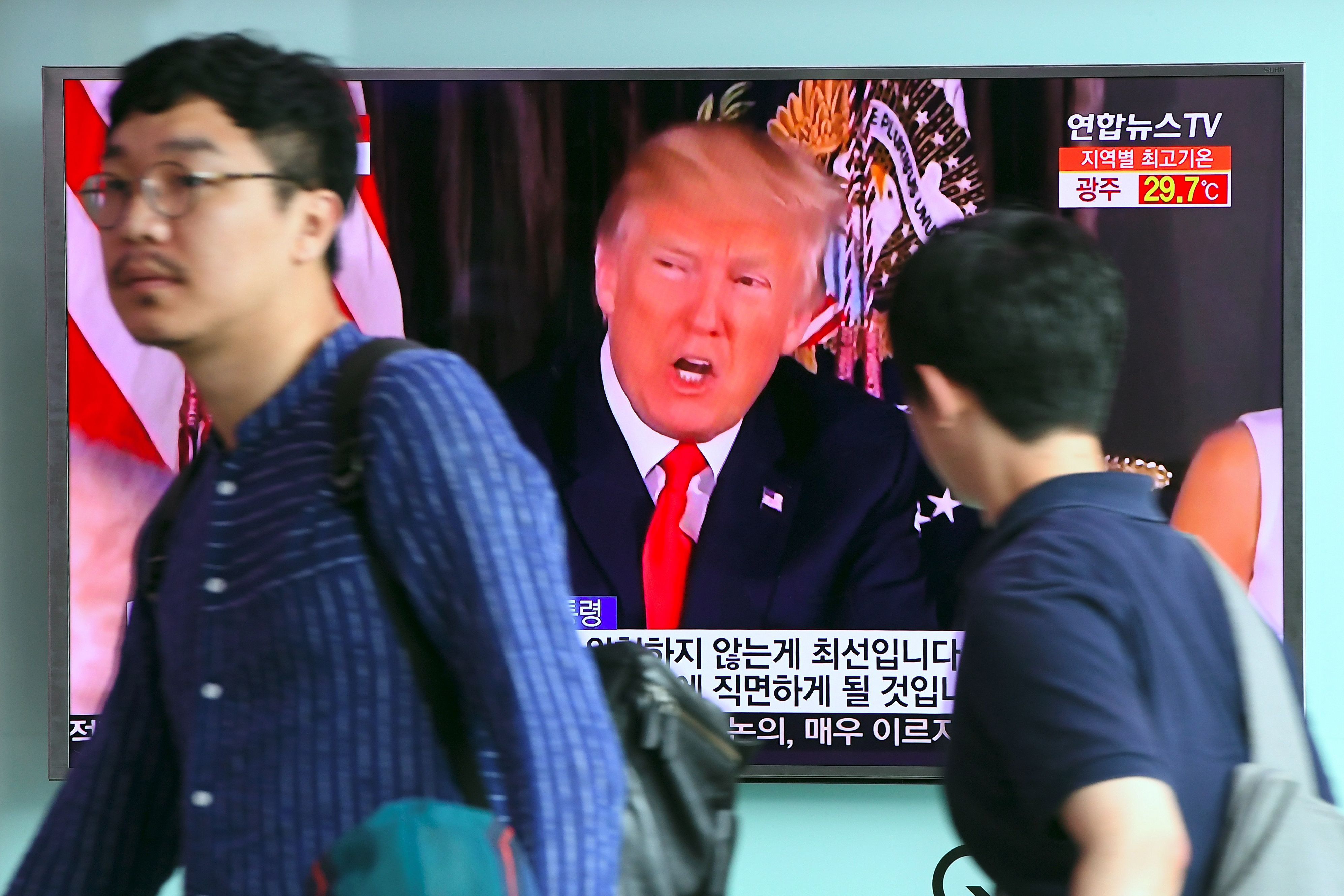 President Donald Trump continued to scold both North Korea and China on Thursday, and a White House aide blasted Secretary of State Rex Tillerson for attempting to calm the public’s fears that Washington is slipping into an unwanted war with Pyongyang.

Trump doubled down on threats he made earlier in the week that he would unleash “fire and fury” on North Korea if it moved against the United States or its allies, saying “it’s about time that somebody stuck up for the people of this country and for the people of other countries. So if anything, maybe that statement wasn’t tough enough.”

On Wednesday, the North Korean defense ministry dismissed Trump’s comments as “a load of nonsense,” coming from a “guy bereft of reason.” It also said it was readying a plan to “box in” Guam with launches of four ballistic missiles; an island territory in the Pacific Ocean, Guam has a key American military base with submarines, warships, aircraft, and thousands of troops.

When asked about the threats, the president, who is spending much of the month at his golf course in Bedminster, N.J., cautioned Pyongyang about attacking the United States and its allies. “Because things will happen to them like they never thought possible, OK? He’s been pushing the world around for a long time.”

Asked what would have been tougher than “fire and fury,” Trump replied only, “You’ll see. You’ll see.”

If the missiles were actually launched at Guam — North Korean officials hope to drop them about 40 kilometers offshore — it would be the first time North Korean missiles landed so close to an American territory, and it would force the U.S. military to decide if it would attempt to shoot them down. It’s unclear how accurate the North can be when launching intermediate-range missiles, putting Guam’s 160,000 residents in danger.

Most missile tests are off limits to missile defenses, because they don’t go through forbidden areas; a shot just off a major U.S. base would be fair game, though. The most likely way to take the missiles down would be by American or Japanese warships equipped with the Aegis radar and missile defense system.

“Right now you can hear the screws turning on Aegis ships steaming somewhere between North Korea and Guam,” said Tom Karako, director of the missile defense project at the Center for Strategic and International Studies in Washington.

The United States operates two radar systems in Japan and one in Korea, which along with satellite surveillance would pick up any North Korean launch quickly, Karako said, and would transmit that data to Guam which also houses the advanced radar. The U.S. military also has a THAAD missile defense system on the island, which could hit the missiles on their way back to earth.

Defense Secretary Jim Mattis, asked about the issue while traveling in Washington state on Thursday, told reporters, “do I have military options? Of course I do. That’s my responsibility, to have those. And we work very closely with allies to ensure that this is not unilateral either.”

Mattis pointed out, however, that a diplomatic solution is the preferred choice to end the crisis, “but at the same time, our defenses are robust.”

Traveling in Asia, Secretary of State Rex Tillerson a day earlier sought to tamp down tensions, suggesting to reporters that despite the rhetoric, “Americans should sleep well at night” and that “I do not believe that there is any imminent threat.”

But in another sign of a White House and cabinet that struggles to present a united front, White House aide Sebastian Gorka blasted America’s top diplomat on Thursday, suggesting that Tillerson was speaking out of turn. Gorka told BBC Radio that it was “nonsensical” for the Washington’s top diplomat to speak on military issues.

“The idea that Secretary Tillerson is going to discuss military matters is simply nonsensical,” Gorka said. “It is the job of Secretary Mattis, the secretary of defense, to talk about the military options, and he has done so unequivocally…. That is his mandate. Secretary Tillerson is the chief diplomat of the United States, and it is his portfolio to handle those issues.”